Michael Faraday (1791-1867), English physicist and chemist, who discovered electromagnetic induction, thus laying the foundations of the electric power industry. He also essentially created the science of electrochemistry. Perhaps the greatest experimental scientist of all time, Faraday was also a brilliant theorist: he was the principal architect of the classical field theory later developed by James Clerk Maxwell and Albert Einstein. 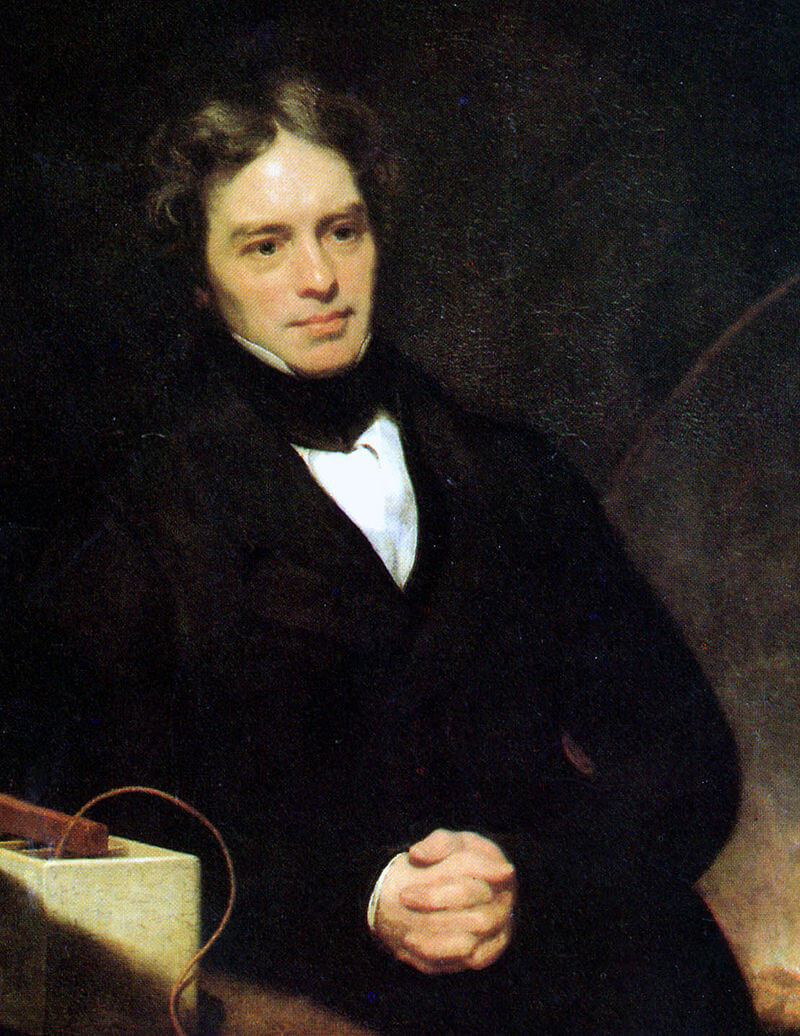 Faraday was born in Newington Butts (now part of London) on Sept. 22, 1791. His very poor family belonged to a small Presbyterian sect known as Sandemanians, who combined belief in the literal truth of Scripture with the love and simplicity of the early Christians. Faraday later insisted that he kept his religion and his science completely separate, but there is considerable evidence to the contrary; much of his field theory seems to have been inRuenced by his deep conviction of the divine harmony and unity of the universe.

Faraday’s formal education was limited to the elements of reading and writing, and his mathematical training covered only the rudiments of ciphering. However, his lack of mathematical instruction was probably a help rather than a hindrance to him in his electromagnetic research. In 1805, Faraday was apprenticed to a bookseller and bookbinder. During the eight years he spent learning this trade he took the opportunity to read widely. His passion for science was first aroused by an encyclopedia artide on electricity. He at once plunged into the subject, making his first instrument-an electrostatic generator-out of some old glass bottles.

In 1812 one of the shop’s customers gave Faraday tickets to a : series of lectures by Humphry Davy, director of the Royal Institution’s laboratory. Faraday was entranced. He took careful notes, wrote them out in his fine hand, bound them, and sent them to Davy, applying for employment. Davy was greatly Hattered. In October he asked Faraday to serve as his secretary and in March 1813 as his laboratory assistant. Faraday’s scientific career had begun.

In 1821, Faraday married Sarah Barnard, with whom he lived happily until his death, they had no children. In the same year he became superintendent of the Royal Institution; he succeeded Davy as director of its laboratory in 1825 and became Fullerian professor of chemistry there in 1833. He was elected a member of the Royal Society in 1824, but declined scores of other honors, including a knighthood and the presideney of the Royal Society. After 1860 he sank gradually into senility. He had retired in 1858 to a house on the green at Hampton Court, presented to him by Queen Victoria, where he died peacefully in his study on Aug. 25, 1867.

Faraday’s earliest work was in analytical chemistry. He discovered the first organic compounds containing chlorine, liquefied several gases, and discovered butylene. In 1825 he isolated, named, and analyzed benzene. Analytical chemistry seemed to have been put on a firm foundation by John Dalton’s atomic theory (1808), according to which the various properties of matter (such as heat, light, magnetism, and positive and negative electricity) might be regarded as material entities surrounding each hard, impenetrable atom as successive “atmospheres.” However, the clumsiness of this model hel d little appeal for some physicists, among them Davy and Faraday, who remained skeptical. 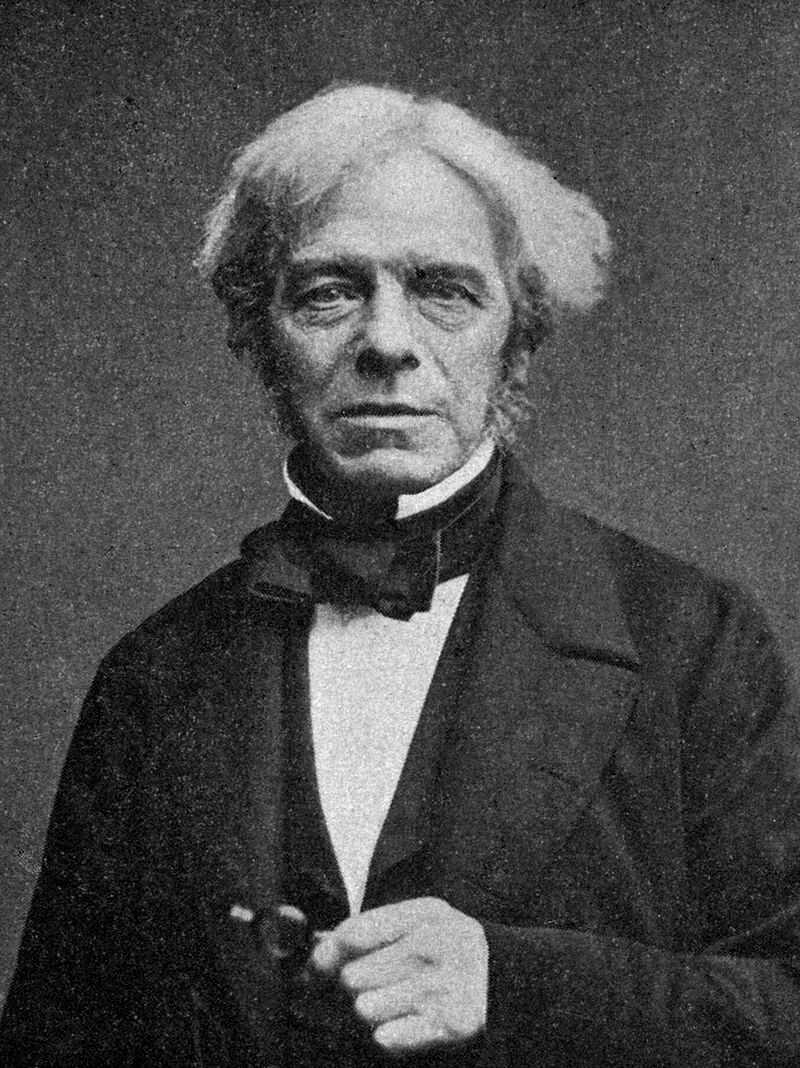 They doubted the material existence of such physical properties, and that of the atom as well. Such doubts led Faraday to adopt an alternative atomic theory. In 1763, Ruggiero Giuseppe Boscovich had suggested that atoms are dimensionless pointlike structures surrounded by alternating zones of attractive ‘ and repulsive force. The behavior of physical reality, Boscovich held, was to be explained by the interactions of such forces. Further, the forces that could be studied in the laboratory-electrical, magnetic, thermal, and so on-were assumed to be convertible into one another under proper conditions, This view of reality was to guide Faraday throughout most of his career.

In 1820 the first of the conversions foreseen by this physical theory was realized when Hans Christian Oersted discovered that a wire carrying a current is surrounded by a magnetic force. Faraday soon began experiments that led to his demonstration in 1821 that a current-carrying wire free to rotate about a single magnetic pole will do so as long as the current is Howing. He thus converted electrical force into mechanical force, the principle of the electric motor.

Faraday tried several times during the 1820’s to convert magnetism into electricity. Finally, on Aug. 29, 1831, he found that currents could be induced by making or breaking an electric circuit and its accompanying electromagnetic field; he had thus discovered electromagnetic induction, converting -electromagnetisrn into current electricity. A few weeks af ter this great discovery he found the conditions for the conversion of ordinary magnetism into electricity. When he plunged a permanent magnet into a coil of wire, he observed that a current was generated in the wire. This was the first generator, operating on the principle now fundamental to the electrical power industry. On Oct. 28, 1831, Faraday succeeded in generating a steady current by rotating a copper disk, with leads from the center and the edge, between the poles of a permanent magnet. This device, now known as the homopoZar generator, was the first dynamo.

To explain the law of current generation, Faraday introduced the notion of magnetic lines of force. These are the lines along which iron filings gather when sprinkled over a permanent magnet. When such lines are cut by a conductor, a current is generated whose strength depends on the power of the magnet, the rate at which the lines are cut, and the conductivity of the substance cutting them.

In 1832, doubt arose as to whether the nature of electricity varied with its method of production. Faraday was convinced that it did not and set out to prove it. In the course of this research, working with electrolytic cells, he came to astartling conclusion: the electrical force in such a cell did not act at a distance upon the substances being decomposed by it. Most electrochemists hitherto had taken for granted that the positive and negative poles were centers of force which, acting at a distance up on the molecules in a solution, literally tore them apart. Faraday now began an intensive study of this subject; the first results (1834) were his laws of electrolysis. He also introduced much of the modern electrochemical nomenclature, including the terms electrode, anode, cathode, ian, anion, catian, ianizatian, electrolute, and electrolysis.

The fact that electrical force did not act at a distance in electrolysis suggested to Faraday that the same might be true of electrostatic action. The theory of action at a distance was firmly established, and its most subtle nuances had been worked out in elegant mathematical detail. A mathematically trained physicist might not have dared to attack it, but Faraday felt that it might be successfully challenged. In a series of experiments, using the theory of point-atoms, he showed that electrostatic force a1so did not act at a distance but was transmitted as a strain between one point-atom and the next across space. The electrostatic line of force consisted of such strains, and their total effect was the electrostatic field.

Lines of force were to be central in Faraday’s later development of his field theory. At this stage he conceived of them as strains in the medium surrounding the magnet, not spelling out what this medium was. In his electrostatic researches, the strain was between the particles of the air-or, in the case of induction through a dielectric solid such as sulfur, between the sulfur particles. This was why the charge on the induced body was always exactly equal to and opposed in sign to that on the inducing body-it was merely the opposite end of the line of strain. Faraday’s concept of lines of force had revolutionary implications: the energy of the system was not in the body from which the electrostatic force emanated or in that upon which a charge was induced, rather it was in strains between intervening particles. 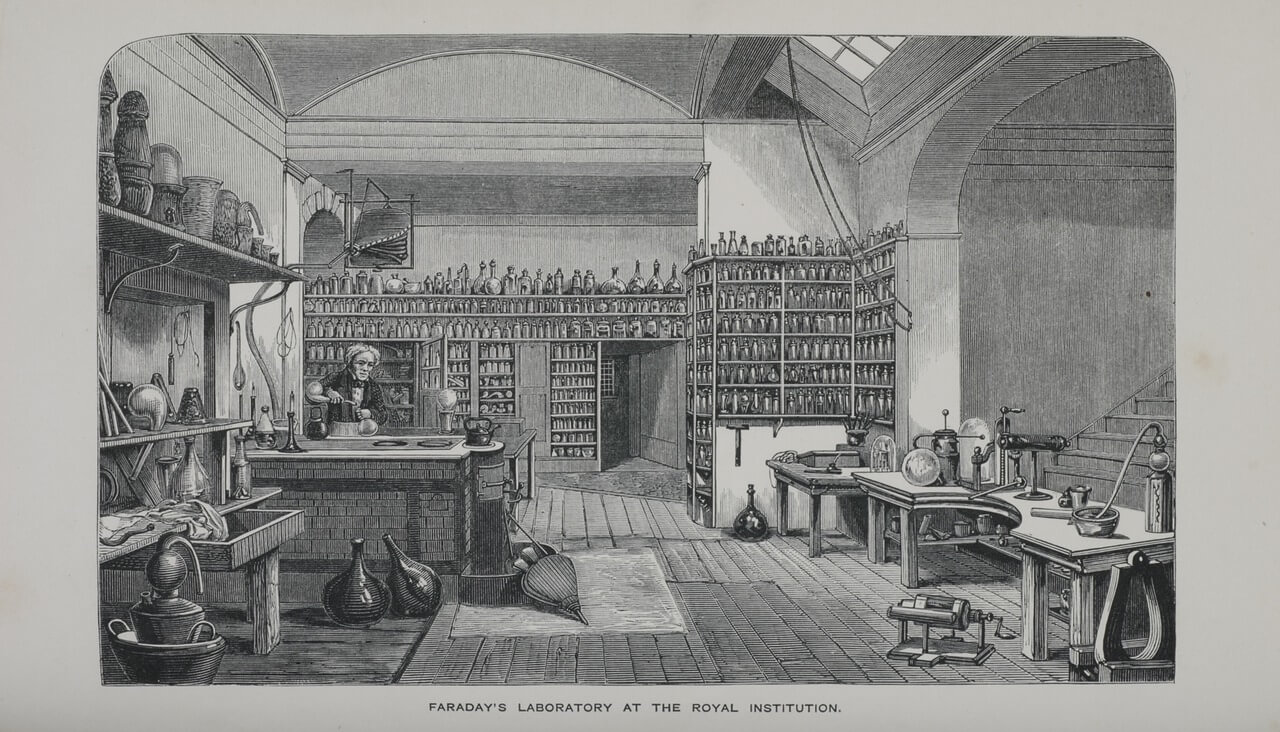 The energy was, in short, in the field; this is the primary axiom of field theory, Difficulties arose in the later investigation of magnetic lines of force, which could pass through empty space. Most physicists later assumed that same medium, the ether, must conduct these strains, but Faraday himself remained uncommitted on this point throughout his career.

The intense concentration demanded by almost 10 years of highly original research could no longer be sustained. In 1839, Faraday suffered a breakdown and from then to 1845 his work was sporadic. During this time he grew more than ever convinced of the basic unity of all forces, and in 1845 he returned to his search for experimental confinnation. On Sept. 13, 1845, he discovered that when plane-polarized light passes through a piece of glass with a high refractive index, the plane of polarization can be rotated by intense magnetic force. He inferred that magnetism must be one of the fundamental forces of nature, and he soon concluded that all bodies were affected by magnetic force. Those, like iron, that moved from areas of less intense magnetic force into areas of more intense force he called pammagnetic; those of the opposite kind he called diamagnetic.

The last problem with which Faraday dealt was that of the nature of magnetism itself. The magnetic line of force, unlike the electrostatic, had no “ends,’ for, as Faraday showed, it was a continuous curve. Because such a line of force could not result from the strains of contiguous particles, Faraday could not explain it, but be suggested that it might be “a peculiar condition of space itself.” By this time his mind was failing, and he could no longer test his speculations. However, his idea was adopted later by James Clerk Maxwell, who developed it mathematically into classical field theory, and it plays a major role in Einstein’s theory of relativity. 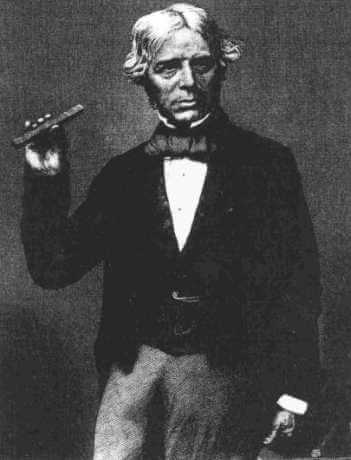 FARADAY’S LAWS, are three laws discovered by the English scientist Michael Faraday in the 1830 s. They are: