Who is Aeneas? The Myth, story, history of Aeneas. The role of Aeneas in the Roman Mythology.

Aeneas; The famous Trojan-Roman hero; the son of Anchises and the goddess Venus-Aphrodite. The Romans believed that an important element among them came from Asia Minor—Trojans who escaped the sack of Troy by the Greeks and followed Aeneas. This myth received classic statement in Virgil’s Aeneid, an account of the wanderings of fugitive Aeneas till his settlement in Italy. Imperial interest in the epic poem was pronounced. From Spain in 26 bc Augustus, the first Roman Emperor, wrote to Virgil expressing a wish to have a draft or portions of the Aeneid which had been begun about that time. Virgil celebrated the destiny of the Romans as the divinely inspired rulers of the ancient world: it was a sentiment close to the heart of the victor of Actium. 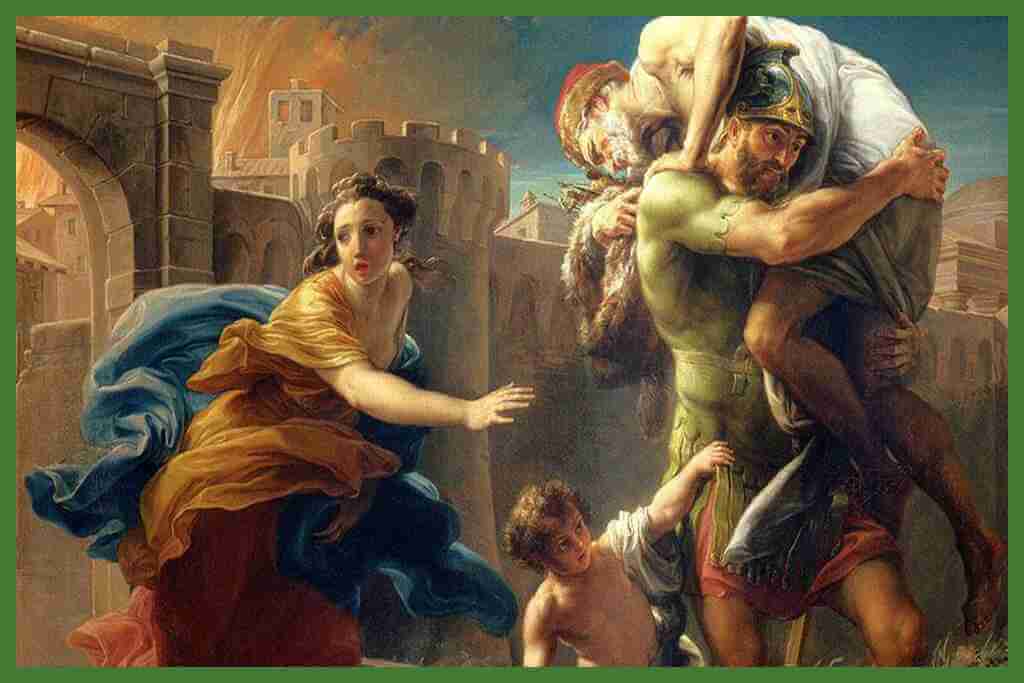 After sailing to Crete, where he learned in a dream that Dardanus, ancestor of the Trojan royal family, hailed originally from Italy, Aeneas continued to Epirus upon the eastern Adriatic coast, and then on to Sicily and Carthage before making landfall near the rock-hewn sanctuary of the Cumaean Sibyl. The diversion to North Africa occurred because of a sudden storm sent by the goddess Juno, who had constantly pursued him with her hatred during the voyage. This animosity appears to owe something to the fierce antagonism of Hera for Heracles, the Greek hero. At Carthage, Venus ensured that Aeneas and Dido, its Queen, fell deeply ;n love. When, in obedience to the command of Jupiter, he left her, she burned herself to death on a funeral pyre.

Of interest is Aeneas’ visit to the underworld. The Sibyl bade him arm himself with the golden bough, and together they descended to ‘the land of shades’. When Aeneas encountered Dido there and tried to speak to her; she turned away in silence. But then he came upon his father Anchises, who disclosed to him the future glories of Rome, reaching their climax with the reign of Augustus. The remainder of the Aeneid relates the unification ofthe Trojans and the Latins into a single nation, which was the great mythical achievement of ‘pious’ Aeneas.