ELECTROLYSIS, is the decomposition of chemical compounds by an electric current. It is a widely used industrial process, particularly for the production and refining of metals. Electroplating, another important electrolytic process, is covered in a separate article.

The electrolysis of water illustrates certain aspects of the process. In order for water to be decomposed by electrolysis something must be added to it to enable it to conduct electricity. Either sulfuric acid or sodium hydroxide may be used. The sulfate ion is not oxidized at the anode, nor is the sodium ion reduced at the cathode. Only oxygen and hydrogen appear at the electrodes. In all electrolysis the electrode materials must be properly chosen so that they do not react with the electrolyte and produce unwanted side reactions. In this case the anode must be of a material, such as platinum or graphite, that is not oxidized. The electrolysis of water follows Faraday’s laws. Oxygen and hydrogen are liberated in the ratio of 1:2 by volume or 8:1 by weight, and the quantities produced can be predicted by multiplying the current in amperes by the time in seconds, then dividing by the Faraday constant, 96,500, to obtain the number of gram-equivalents of each product. 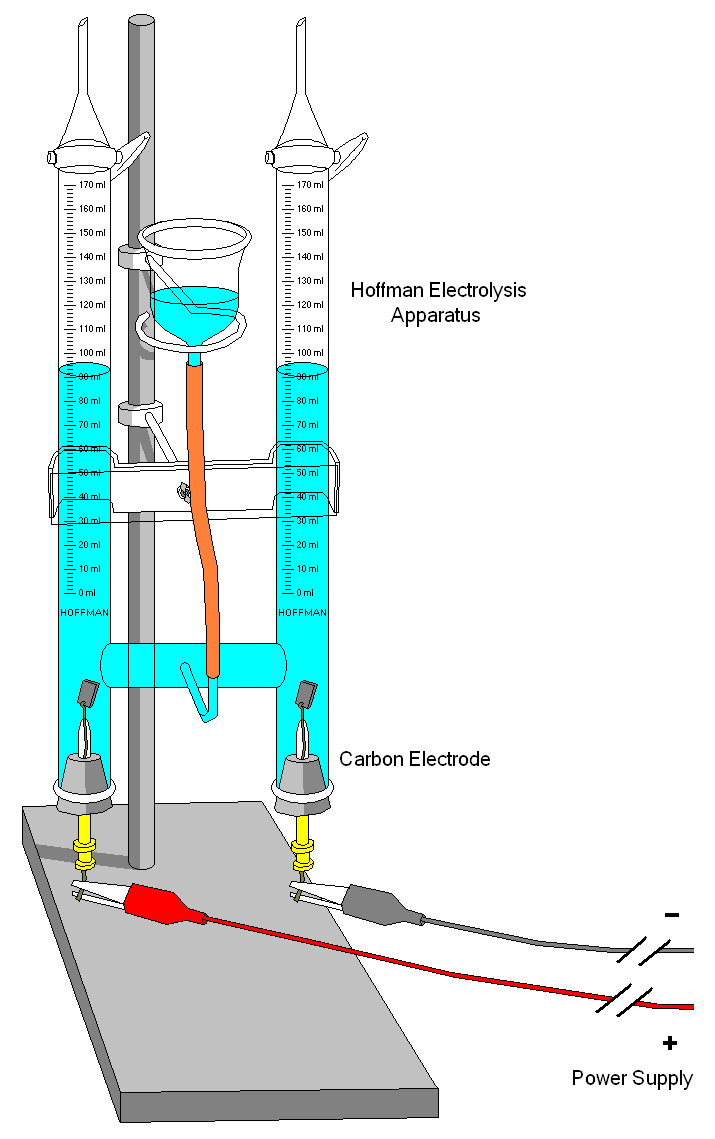 Illustration of a Hofmann electrolysis apparatus used in a school laboratory (Source : wikipedia.org)

Zinc is produced by electrolyzing a slightly acid solution of zinc sulfate. Although it would seem from the electrochemical series that hydrogen rather than zinc would be produced at the cathode, this does not occur because the electrochemical process in which hydrogen ions gain electrons to form hydrogen gas, Hj, is slow and requires a catalyst. Metallic zinc is a poor catalyst for this process, and to liberate hydrogen gas on zinc at a reasonable rate the negative potential of the cathode must be much greater than is normally present. Thus zinc is deposited rather than hydrogen.

Crude copper is refined by using it as the anode in a cell containing a copper sulfate solution. The cathode is a sheet of pure copper. At the anode, copper atoms are oxidized to copper ions and enter the solution. Less active metals, such as gold and silver, are not oxidized and fail to the bottom of the cell as a sludge. At the cathode, copper ions from solution are reduced back to metallic copper and deposited on the cathode. ions of more active metals, such as iron and zinc, are not reduced and remain in solution.

Because aluminum and magnesium can decompose water, they must be present in the form of molten salts to undergo electrolysis. For aluminum a mixture of aluminum oxide in potassium fluoaluminate is used, and for magnesium, molten magnesium chloride containing potassium chloride and potassium fluoride is used. Carbon electrodes are used for both metals. In the manufacture of aluminum, oxygen formed at the anode burns away the carbon so quickly that anodes must be frequently replaced. Electric power consumption is high because the equivalent weights of the metals are low—one faraday of electricity makes 9 grams of aluminum or 12 grams of magnesium. Thus these industries must be located where electric power is cheap.

Electrolysis is also used for the production of certain chemicals, including permanganates.