Cimon; (c. 510-450 b. c.), Athenian general. A member of the aristocratic Philaid family, he was the son of Miltiades, the victor of Marathon, and Hegesipyle, daughter of the Thracian king Olorus. In 489 b. c., Cimon paid the 50-talent fine imposed by the Athenians upon his father, who had failed in a punitive expedition against Paros. During this expedition Miltiades had received a wound that led to his death.

Cimon is said to have fought well at the Battle of Salamis (480). He was elected one of the 10 Athenian generals in 478 and probably held this position during most of the next 17 years. He became the leading commander of the combined fleets of Athens and the Delian League, which had been formed to fight the Persians. He encouraged the league members to contribute money rather than men and ships, thus increasing the power and efficiency of Athens’ fleet while weakening the allies. This process ultimately led, after Cimon’s death, to Athens’ turning the league into an empire. 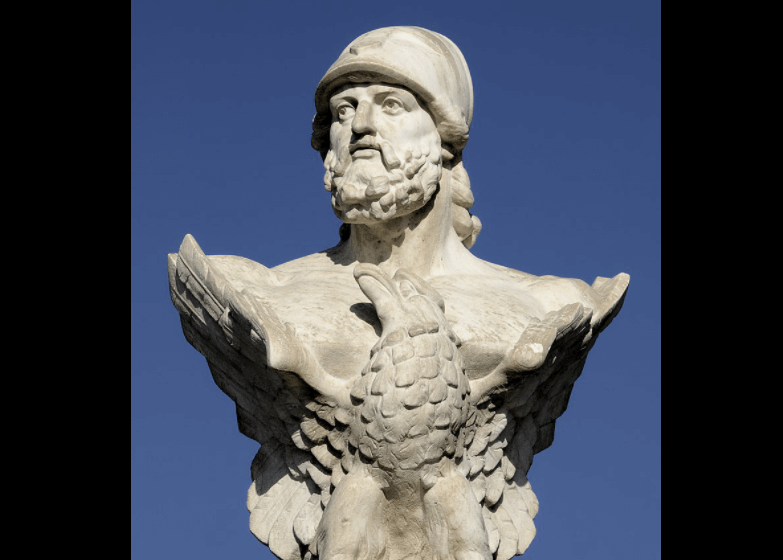 Cimon expelled the Persians from Eion about 476, winning for Athens part of the rich Thracian coast. Shortly thereafter he captured the island of Skyros from pirates and returned with what were purported to be the bones of the legendary Athenian king Theseus. The bones were then buried in a shrine near the Agora. About 469, Cimon led a large fleet to the east and won, in a single day, a spectacular double victory over the Persians on land and sea at the river Eurymedon in Pamphylia, Asia Minor. He used the spoils, and perhaps part of his own fortune, to beautify Athens.

When Thasos tried to withdraw from the Delian League in 465, Cimon besieged the island and took it in 463. On his return the leaders of the growing democratic element in Athens, Ephialtes and Pericles, accused him of accepting bribes. They were suspicious of Cimon’s conservatism and his friendship with Sparta. But Cimon was acquitted and in the next year convinced the Athenians to send aid to Sparta against the Messenian helots, who had revolted. When Cimon and the Athenian troops arrived, however, they were told by the Spartans to return home The Spartans suspected that most of the Athenians secretly sympathized with the enemy. This insult to Athenian pride doomed Cimon politically. Ephialtes and Pericles stripped the conservative Council of the Areopagus of its political powers, which were transferred to the democratic juries and Council of Five Hundred. Cimon was ostracized in 461.

Although there is a story that he was soon recalled, it is far more likely that he served the whole 10-year period of banishment; at least there is no sign of his presence during this period when the Athenians were trying to fight Sparta and Persia simultaneously. But in 451, Cimon made a 5-year truce with Sparta. He was again elected general and in 450 led a major expedition to Cyprus. He defeated the Persian fleet and besieged Citium, but died there of unknown causes. The expedition withdrew, and in the next year Athens made peace with Persia.