Who was Barbara McClintock? What are the life and achievements of the first female scientist who won the Nobel Prize in Medicine alone?

Barbara McClintock, one of the most distinguished scientists of the 20th century, was the first woman to win the Nobel Prize in Physiology or Medicine alone in 1983, at the age of 81, for her work known as “mobile genetic elements” , that is, genetic transposition or the ability to change the position of genes on the chromosome. It is considered.

She became the third woman to be elected to the National Academy of Sciences in 1944, which was one of the difficult times for women to be accepted in the social field, and the first woman to be elected as the president of the American Genetic Society in 1945. In 1971 President Richard M. Nixon presented McClintock with the National Medal of Science . He was 79 years old when he became the first recipient of a lifetime MacArthur Foundation grant, known unofficially as the “genius” fellowship, and was awarded the Albert-Mary Lasker Award that same year.

“Over the years, I’ve really enjoyed not having to defend my comments. I could only work with great pleasure. I never felt the need or desire to defend my views. If I turned out to be wrong, I would simply forget that I had such an opinion. It was not a big deal.” Barbara McClintock 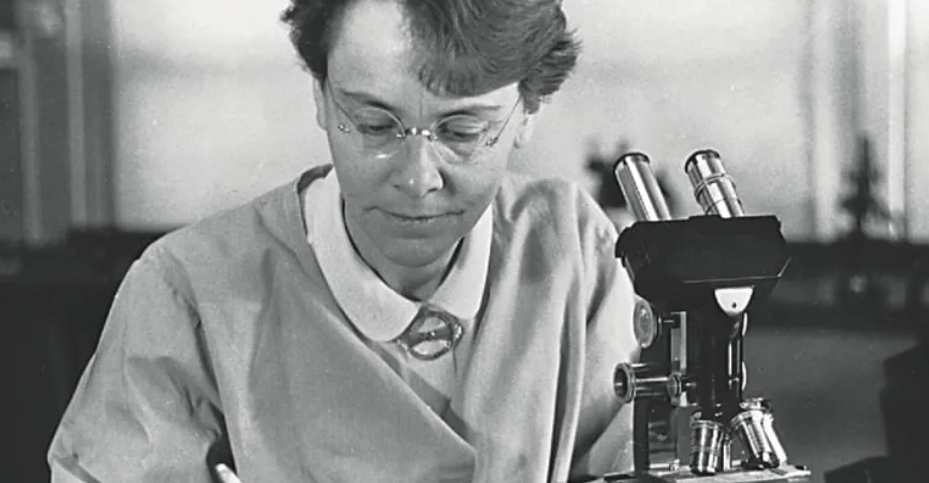 McClintock’s father is an army doctor and mother is a piano teacher, and Barbara was born in 1902 in Hartford, Connecticut. He has been interested in sports since his childhood; He took an active part in some sports branches such as volleyball, swimming and skating.

McClintock, who likes to run after knowledge, decides to go to university at that time, when women are not given a role outside of marriage. He enrolled in Cornell University’s College of Agriculture in 1918. He is a popular student while pursuing his undergraduate studies and also benefits from the social and intellectual environment of his school. He decides to continue his graduate education in the field of cytology. Although female students at Cornell are not allowed to enter the genetics department, she joins a small group that studies maize cytogenetics —which refers to the genetic study of maize at the cellular level. Over time, he becomes a very influential member of this group and works as an assistant from the second year of his education.

Defines a new method on maize genetics and explains the structure of maize chromosomes . When he finished his doctorate in 1927, he remained at the same university as an instructor to map maize chromosomes. He helped one of his close friends since his graduate education, the US geneticist George Wells Beadle , to solve the chromosome structure of the fungus called Neurospora . Beadle developed the theory of “one gene, one enzyme” with this work. In 1929, McClintock met the US botanist Harriet Creighton , a graduate student , and worked with him to show how chromosome transitions occur in corn chromosomes.

At the beginning of 1930, he won the National Research Council and Guggenheim Foundation scholarships and went to Germany to carry out some of his studies. However, due to the increasing political tension, he has to return to his country early. “I couldn’t have chosen a worse time. The general morale of the scientists was encouraging, but there were hardly any students from other countries. The political situation and its devastating consequences were very evident.” He gives information about the seriousness of the situation.

In 1931, he began to spend his time shuttling between the University of Missouri and Cornell University . He explores the effects of X-rays on maize, discovering translocations, inversions, deletions and ring chromosomes in the maize plant.

In 1936, he was offered to be a faculty educator by the University of Missouri and started to work as an assistant professor. He is given an opinion that his work-oriented studies do not fit the idea of ​​a “ma’am” scientist. He sees that he will never be promoted as independent and “maverick” methods are claimed to exist, and he leaves the university in 1941 after five years of study. For this unfair process, “I have not received a job offer yet. I can’t say that I’m very excited to be still on the unemployed list, even though I’m getting a decent salary right now. Uncertainty bothers me a little and it depresses me. It prevents me from continuing my work without the necessary stimulus.” he said.

American Geneticists Marcus Morton Rhoades (1903-1991) and Milislav Demerec (Croatian Geneticist, 1895-1966), who worked as geneticists at Columbia University and continued their research on the small fly species Drosophila , highly respected McClintock’s research and They invited . to the Cold Spring Harbor Laboratory to spend the summer season.

When Demerec becomes Director of the Department of Genetics at the Washington Carnegie Institution in Cold Spring Harbor, he offers McClintock to work with him. Undecided at first, McClintock finally accepted this offer in 1942 and performed the transposition process of the maize chromosomes, which brought him the Nobel Prize in Medicine, in Cold Spring Harbor.

McClintock received funding in 1957 from the National Science Foundation and the Rockefeller Foundation to study different types or breeds of maize in South and Central America. For this reason, in the early 1960s, he traveled extensively, collecting samples of maize exhibiting interesting evolutionary characteristics, and mentoring scientists and graduate students in maize genetics. McClintock and colleagues spent two decades collecting data on differences in South American maize and finally published in 1981 the article “The Chromosomal Constitution of Races of Maize” .

After a career of 26 years , he retired from the Carnegie Institution in 1967 and was awarded the Distinguished Service Award . He continued to work as a research inspector at Cold Spring Harbor until his death in 1992. McClintock, who loved to play tennis and pick walnuts for his colleagues on the expansive grounds of Cold Spring Harbor, died on September 2, 1992 at the age of 90; He is remembered by those who knew him for his wit, sense of humor, and passion for science.

The Journey of Being the First Woman Scientist to be awarded the Nobel Prize in Medicine alone
The negative view of women in academia is a global problem even today. It is important to draw attention to this point that we understand why it took so long for McClintock’s idea of ​​”jumping genes (transposons)” to be accepted in the past century . Since the McClintock documents will be made publicly available from the Nobel archive in 2033, it seems unlikely until then that we will have any definitive information on why it took him so long to win the prize.

McClintock, unlike Mendel, was able to analyze the relationship of plant chromosomes by going beyond the work of Gregor Mendel (Austrian Botanist, 1822 – 1884) on peas in the nineteenth century . The first experimental evidence that genes are located on chromosomes came from the work of McClintock and Harriet Creighton in the early 1930s .

That is, in most organisms, each of a pair of chromosomes is inherited from each parent. During the process of cellular division called meiosis , it has long been suspected that pieces of chromosome inherited from one parent can be replaced by similar pieces on the chromosome from the other parent. McClintock and Creighton were able to link a genetic trait with a fragment of a chromosome that can be observed under the microscope, thus demonstrating the physical basis of genetic transmission .

As he wrote to Charles Burnham (US Geneticist, 1904 – 1995) in November 1929 , “I have not completely resolved the situation; but I discovered some new things that were very valuable cytologically. I sincerely think I can solve a lot more as it turns out to be more interesting than I thought; At least right now, I have more confidence than I did 10 days ago when I felt hopelessly failing at not being able to solve anything.” says. McClintock and Creighton’s papers, published in 1931, become classics in the field among the Proceedings of the National Academy of Sciences .

Geneticists discovered that using X-rays caused mutations in genes in fruit flies, maize, and other organisms, so they could match a gene to a specific region on a chromosome. In some cases, X-rays physically broke the chromosome, and McClintock found each of the broken ends and fused them in different ways, leading to a major discovery.

In the late 1930s, McClintock discovered among the stocks of X-rayed plants plants whose chromosomes spontaneously fractured without further exposure to radiation . He also observed that as plants grow, they continue to break in the cycle of “breaking, fusion, and bridge”, just like fused chromosomes that separate during cell division. McClintock ‘s explanation of the “break-fusion-bridge” cycle in 1938 heightened his status as one of the greatest figures in maize cytogenetics and empowered him to undertake deeper research into chromosomes. In August 1940, he told a colleague, “I’ve been working like hell on an exciting general problem in genetics with great results. He wakes me up early and puts me to bed late!” he writes.

In fact, starting in the late 1920s, McClintock studied how genes in chromosomes could “move” during the breeding of maize plants. With his studies, he discovered that genetic elements can move to a different position from time to time , and showed that there are pieces of DNA called “jump genes” , that is, “transposons” in genetics. After him, molecular biologists from the early 1970s on bacteria and viruses; they later found a transposon in yeast. Unfortunately, McClintock’s work was not accepted until the existence of transposons was proven on bacteria.

What are Transposons? Why is it Important?

Transposons are often called junk DNA and are DNA fragments in genomes that cannot directly encode protein. According to some studies, about half of the human genome and 90% of the maize genome consists of these particles. Most transposons are not motile ; but the motile ones can cause harmful mutations when passed down from generation to generation .

Links have been established between transposition and cancer, immunology and genetic engineering, as it plays a role in the transfer of genes that confer resistance to antibiotics , certain types of viral infections , and other basic biological processes .

In addition to his work on chromosomes and transposable elements, McClintock has since the 1940s shown that certain genes are responsible for the color of leaves, the physical properties of maize kernels, or individual opening and closing, and he has developed theories involving the suppression of genetic information from one generation of maize plants to the next . More than 40 years ago he proposed the idea that it is possible to inherit changes in gene activity that are not caused by changes in DNA , a concept now formally known as epigenetics .

His scientific work is cited as the second major discovery in genetics after Mendel . Despite being described as radical by scientists and overlooked for his achievements, McClintock has studied maize genetics patiently for years. He takes his place among the scientists who will not be forgotten, both with his outstanding efforts to make his achievements accepted and with his ability to face all kinds of difficulties in the field of science – and similar problems continue today.

Let’s leave it to himself: “I was so interested in what I was doing and it was such a great pleasure, such a deep pleasure that I never thought of stopping. … a very fulfilling and interesting life.”