Information on the Greek Goddess Artemis, myth, story and facts. The role of Artemis in the Greek Mythology. 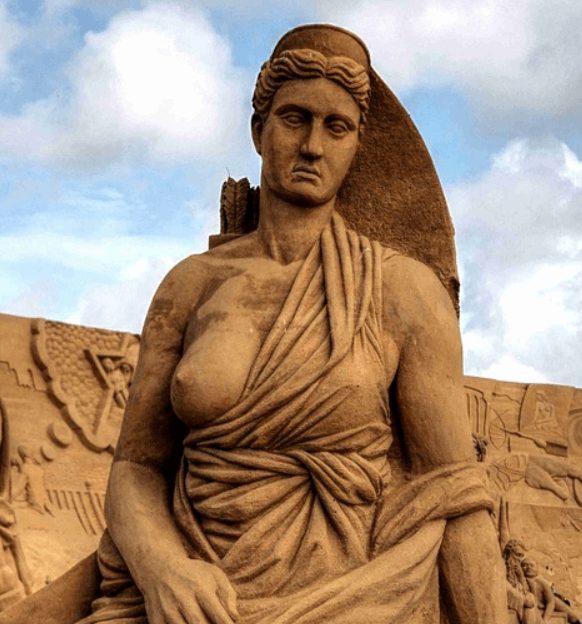 Artemis; When the moon shone, Artemis was present, and beasts and plants would dance. In honour of the goddess male and female dancers performed, and the villagers of Arcadia, in the Peloponnese, attired their girls with phalluses. The Athenians sensed the pre-Greek origins of the virgin huntress Artemis, the goddess of wild places and wild things, and her cult was restricted to the surrounding countryside where arktoi, ‘bear virgins’, attended her. The vestiges of human sacrifice could be found in her worship: blood was drawn from a slight cut on the throat of a male victim by the female devotees of the sometime bear goddess.

Greek legend tells how Actaeon had the misfortune to come, while hunting, upon Artemis as she was bathing. She changed him into a stag and he was pursued and torn to pieces by his own dogs. In an older version the naked goddess was approached by the hunter covered with a stag’s pelt. Like Athena, Artemis sometimes wore the frightful mask of the Gorgon on her neck, for with Athena and Hestia, the mild guardian of the home, she was one of the goddesses over whom Aphrodite had no power. In Asia Minor, however, Aphrodite was often identified with Artemis in the aspect of a virgin huntress.

Korythalia, ‘laurel maiden’, Artemis was the daughter of Zeus and Leto, a Titaness, and the twin sister of Apollo. When the giant Tityos attacked Leto on her way to Delphi, he was slain by one of Artemis’ shafts or by a blow from Apollo. Odysseus saw the offender in Hades: the giant was chained and two vultures tore ceaselessly at his liver.