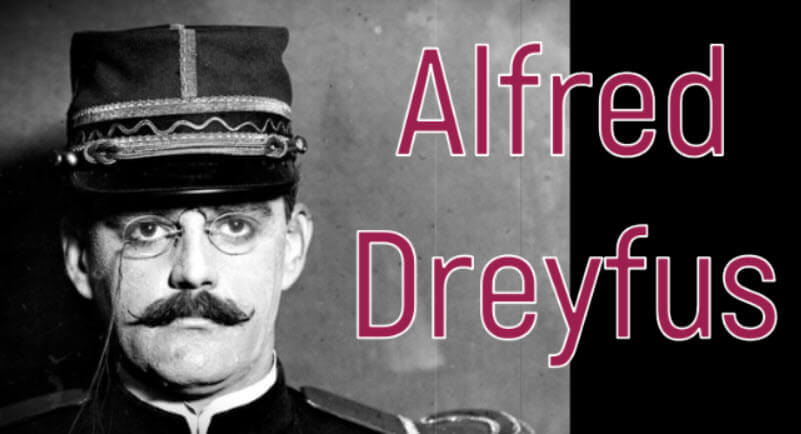 Alfred Dreyfus; (1859-1935), French army officer, who became the central figure of a famous scandal that reflected social and political conflicts in France. Dreyfus was born on Oct. 9, 1859, in Mulhouse, Alsace, into a prosperous Jewish family. When Alsace was annexed by Germany in 1871, he went to France to live. An army officer at 21, Dreyfus had been assigned to the general staff by 1894 and appeared to have begun a successful career.

At this time the French attached considerable importance to the army; hope of recovering the lost provinces of Alsace and Lorraine had not been abandoned, and the French still feared Germany. Many looked to the army for leadership in reestablishing France’s greatness and contrasted the military leaders with the politicians, who were often corrupt and ineffective. The groups that dominated the high posts in the army were sometimes guilty of anti-Semitism during the late 19th century.

The “Dreyfus affair” began in September 1894, when a scrap of wastepaper was removed from the wastebasket of the German military attaché in Paris. This paper, which came to be known as the bordereau, or “memorandum,” was an unsigned letter promising information about various military matters, some of which were highly secret. Everyone, including Gen. Auguste Mercier, the minister of war, assumed that some well-informed officer was betraying secrets to the Germans. Dreyfus was arrested on Oct. 15, 1894, when it was discovered that his handwriting was similar to that on the bordereau.

General Mercier thought that only a conviction would maintain the army’s good reputation. He instructed the counterespionage section of the ministry of war to compile a secret file of evidence that could not be used in open court. This evidence was then shown to the judges but not to Dreyfus’ lawyer. In spite of his claims of innocence, Dreyfus was found guilty and sentenced to life imprisonment on Devil’s Island. The fact that he was Jewish, with connections in Alsace— an area under German control—may have encouraged belief in his guilt.

The Role of Major Esterhazy.

In May 1896 further evidence suggested that the German military attache was communicating with another French officer, Maj. Marie Charles Esterhazy. The new head of counterespionage, Lt. Col. Georges Picquart, found that Esterhazy’s writing strongly resembled that of the bordereau. Picquart’s superiors were reluctant to reconsider Dreyfus’ position and reassigned Picquart to Tunisia in an effort to keep him quiet.

Dreyfus’ brother Mathieu had taken up the cause, however, and had by now convinced many people that there was something odd about his brother’s case. By October 1897, Esterhazy’s name was being mentioned publicly, and it was impossible to avoid bringing him to trial. Military officials were still convinced of Dreyfus’ guilt because more incriminating material had been added to the secret file; they therefore assisted Esterhazy, who was acquitted in January 1898. fimile Zola, the novelist immediately published a newspaper article entitled “J’accuse” (I accuse”), which charged the authorities with conspiring to imprison Dreyfus, an innocent man, and to free a traitor, Esterhazy.

As excitement over the affair rose, many thought that there was a Jewish conspiracy seeking to humiliate the French Army and nation, while others, sympathetic to Dreyfus, believed that arrogant military leaders were trying to protect themselves and to resist civil authority. As it became clear that the Roman Catholic Church was opposed to a retrial, the old quarrel of separation of church and state was revived.

Public interest in the case reached new heights when one of the most vital documents in the secret file on Dreyfus proved to be a forgery. Maj. Hubert J. Henry, an intelligence officer, admitted the forgery and then committed suicide, on Aug. 31, 1898. Esterhazy, his intrigues in danger of being revealed, fled from France. After delays, Dreyfus was brought from Devil’s Island to Rennes for a new court-martial, which began on Aug. 7, 1899. The trial was long, rambling, and complicated, and the verdict was confusing. Dreyfus was found guilty by a majority of the court, but with extenuating circumstances. He was then persuaded to accept a pardon from the President of France. In 1904, further forgeries were discovered in the evidence against Dreyfus, and in 1906 the court of cassation quashed the Rennes verdict and reinstated Dreyfus in the army. He was also awarded the Legion of Honor.

After serving in World War I Dreyfus retired as a lieutenant colonel. He died in Paris on July 12, 1935. For years after the affair officially ended, many people believed in Dreyfus’ guilt and maintained that secret incriminating evidence existed. Some thought that a mysterious and unidentified officer was the traitor. The most likely explanation is that Esterhazy wrote the bordereau, but that he was in a position to give only the most general information about the military subjects mentioned. The affair grew to such dimensions because it illuminated many of the traditional divisions within France and because Dreyfus’ conviction violated the sense of justice of many of the people.