Where is stomach located in human body? What is the role of stomach in digestion? Information on structure and function of stomach.

Stomach; a part of the alimentary canal, lying between the esophagus and the duodenum, or first portion of the small intestine. Its function is to receive solid and liquid foods taken by the mouth and to reduce them to a pulpy liquid by mixing with the gastric juice. The product is known as chyme, and a certain part of it is digested and absorbed before it passes by peristaltic action into the small intestine. 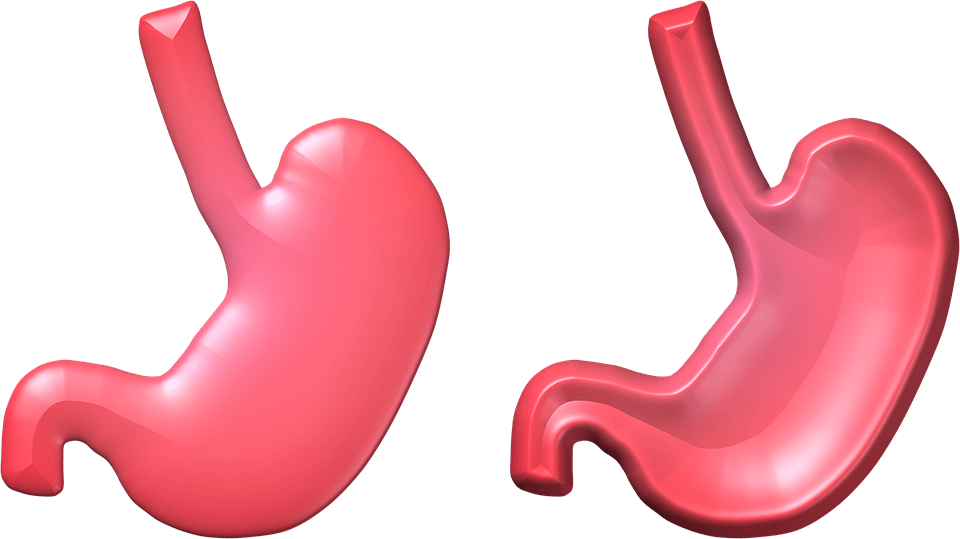 The stomach is shaped somewhat like the letter J and lies mostly in the upper left portion of the abdominal cavity. The part nearest the esophagus is known as the cardiac end or the cardia. At its lower end, where it connects with the duodenum, is the pylorus, a heavily muscled sphincter, which contracts and relaxes during the process of gastric digestion. The remainder of the stomach, the central portion, is known as the body. The stomach has an upper curved border, known as the lesser curvature, and a lower one, also curved, known as the greater curvature. While the form of the organ varies in different individuals, it changes also according to the amount of contents present. When empty, it is a narrow upright tube rather than the conventional reclining organ usually illustrated. Stomachs vary greatly in dimensions, but the average adult capacity is about one quart or liter, while that of a newborn infant is about one fifth as much.

The stomach is composed of the same basic tissue layers as the intestine. From the inside out these layers are the mucous coat, the submucous coat, the muscular coat, and the serous coat. The mucous layer or mucosa is thrown up into a series of folds that disappear when the organ is distended. The muscular coat consists of three layers of smooth muscle, an outer or longitudinal, a middle, and an inner oblique layer. This musculature permits powerful churning or peristaltic movements during the process or digestion, the greatest mobility being at the pylorus.

The stomach is not the principal organ of digestion, since only a comparatively small fraction of the digestive process takes place in it, the main burden falling on the intestinal tract. Nevertheless, without the preparatory work of purification of the food mass in the stomach, where it is liquefied by the addition of water and large amounts of gastric juice, the. intestine would not be able to reduce the chymous material to a state where it can be absorbed through the intestine walls.

During a part of the ordinary interval between meals the stomach is empty, since its contents, after several hours of action by the gastric juice, have been transferred to the intestine. During the resting period the stomach secretes a small amount of gastric juice; It is not mere mechanical irritation that starts the flow, as has been proved time and again by physiological experiment. Secretion occurs as a result of seeing, smelling, and tasting food. Indigestible substances, as well as those without taste, when swallowed, cause no secretion of gastric juice. It is certain that the so-called pyloric secretion will be more effective and more voluminous if the appetite is stimulated by the agreeable sight and taste of food. Certain types of food cause corresponding changes in the quality of gastric juice secreted, all of which has been demonstrated by physiological experiments and tests which need not be discussed here.

The absorptive power of the stomach is small, contrary to popular belief, and water is absorbed only in minute amounts—not more than 5% of the total ingested. On the other hand, alcohol and alcoholic solutions are readily absorbed. Dextrose, lactose, cane sugar, and maltose are easily absorbed. The stomach frequently secretes water in greater amount than is ingested. In certain conditions, such as prolonged vomiting, dehydration may occur even though many gallons of water are swallowed. For this reason, in cases of postoperative vomiting, it is essential to keep the stomach empty and to supply the lack of fluid by intravenous injections.

The motor function of the organ is complex. Not only does the stomach mix and churn the gastric contents, but also at the proper time it expels them through the pylorus into the duodenum. During gastric digestion the cardiac end of the stomach is much less active than the pyloric end. In ruminants, the cardiac end is probably different, even in function, from the pyloric and is the seat of active starch digestion. In man, starches are also digested and changed into sugar, maltose, and dextrose in the cardia by means of the ptyalin of the saliva.