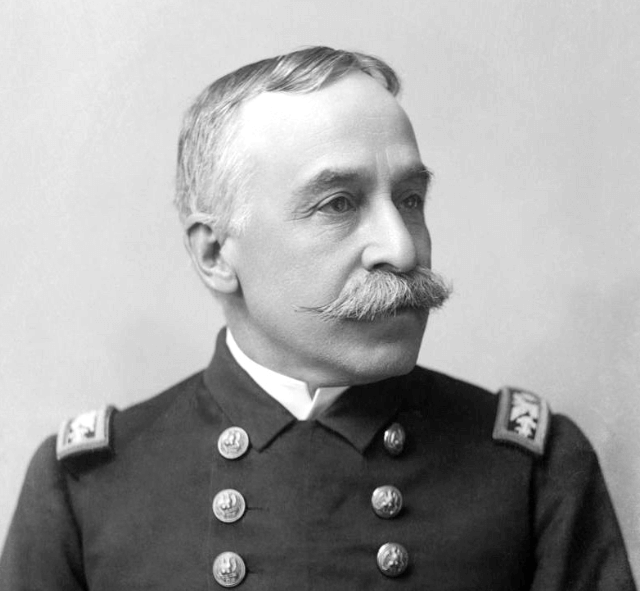 George Dewey; (1837-1917), American admiral, whose victory at the Battle of Manila Bay ended Spanish power in the Philippine Islands. He was born in Montpelier, Vt., on Dec. 26, 1837, the son of a doctor. He graduated from the U.S. Naval Academy in 1858. During the Civil War he took part in the battles of New Orleans and Port Hudson, La., the North Atlantic blockade, and attacks on Fort Fisher, N.C. His peacetime service was varied.

Dewey took command of the Asiatic Squadron in January 1898, and on February 25, Assistant Secretary of the Navy Theodore Roosevelt instructed him to proceed to Hong Kong and prepare for action in the Philippines. The United States declared war against Spain on April 21. On April 25, Dewey was ordered to proceed at once to the Philippines and to capture or destroy the Spanish fleet there. His squadron, consisting of six cruisers, one revenue cutter, and two support ships, headed south on April 27 after the arrival from Manila of the U.S. consul with the first intelligence report on the Philippines the Navy had had since 1876.

Dewey’s ships entered Manila Bay on May 1, shortly after midnight, through mined waters and in the face of numerous guns on islands at the entrance. Only a few guns opened fire, and without effect. At 5:40 a. m. Dewey spoke the famous order to the captain of his flagship: “You may fire when you are ready, Gridley.” Dewey’s squadron, in an ellipse, steamed back and forth at a range of 2,000 yards (1.8 km), its rapid-fire guns demolishing the Spanish fleet of seven weaker ships that were drawn up in line off Cavite Island. When he withdrew at 7:35 a. m., the Spanish fleet was destroyed. Cavite surrendered about noon, but Manila could not be occupied until troops arrived. Dewey established a blockade, but a larger German fleet, sympathetic to Spain, landed supplies. Dewey announced that the U. S. fleet was ready to fight, and the Germans retired.

Congress created for Dewey the rank of admiral of the navy, and he was chairman of the General Board, advising the navy secretary. He died in Washington, D. C., on Jan. 16, 1917.