What did Socrates do? What is the philosophy of Socrates? Information on Socrates works, influences and contributions. 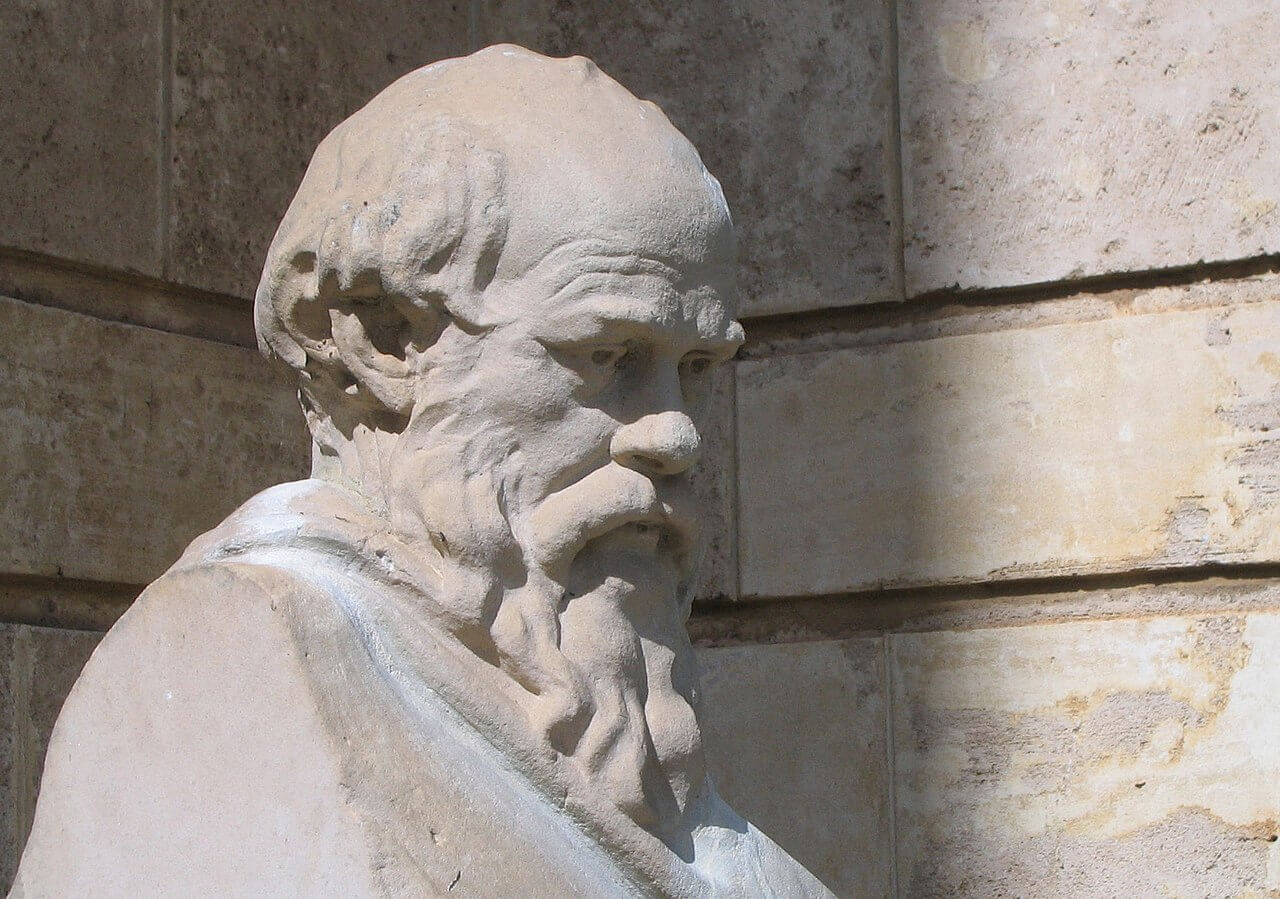 In the Phaedo, Plato has Socrates recount the development of his philosophical interests. According to this account, which may well be historically accurate in its main outlines, Socrates as a young man was much taken with the attempts of the philosophers of nature to provide explanatory accounts of the origin of the world order and the workings of the various processes taking place within it. He was particularly impressed at first with Anaxagoras. (There is a tradition among later writers that Socrates had studied under Archelaus, an obscure follower of Anaxagoras who lived in Athens.) He welcomed Anaxagoras’ appeal to nous (mind) as ultimately responsible for how things are, in the hope that it might provide a truly satisfying explanation in terms of rational purposes. But he was disappointed with the way in which Anaxagoras worked out his system. There were no such explanations at all but only the same appeals to such things as material elements and their supposed properties and ways of operating, as were found in the other philosophers.

Socrates would have eagerly welcomed any instruction he could get in the rational purposes for which things have been arranged as they are, but he saw no hope for enlightenment by the other sort of explanation. Its devotees could not agree among themselves, and their differing accounts seemed arbitrary. Socrates found them simply confusing. Failing to discover any account of the purposes for which nature is arranged as it is, and finding the explanations actually offered by the philosophers to be suspect and unilluminating, he abandoned all effort to find out why things are as they are by examining nature itself. He turned instead to the examination of logoi—that is, statements, arguments, or, in general, words—as a way of discovering something true.

The distinctive feature of Socratic inquiries is that they took as their immediate object not some phenomenon in the natural world but some person and his ideas. On certain subjects, particularly moral and political affairs in which even ordinary men would seem to be experienced enough to judge with reasonable confidence, Socrates hoped that by methodically and repeatedly examining someone’s ideas he might ultimately lead him to the discovery and establishment of the truth. Plato in his early dialogues provides examples of Socrates busy at this sort of examination. Typically, at the outset of these dialogues a question is raised about the virtues in general or about one of them. Socrates then presses his interlocutor to say what he thinks is the correct account of virtue or of the particular virtue in question.

The proposed account, which thereafter becomes common property between them, is then scrutinized for consistency with other beliefs firmly accepted by Socrates and the interlocutor, or at any rate by the interlocutor. Do they accept as virtuous those acts or objects that this definition would imply to be such? Does the definition agree with other beliefs about virtue or the virtue in question that they also hold? Here, too, Socrates would often introduce those homely references to shoemakers and carpenters and horse trainers that so offended and irritated some of those with whom he argued. He thought that there ought to be analogies between the kind of powers and dispositions possessed by the just man, for example, and those characteristic of these other practitioners. If some account of justice had the effect of denying such analogies, that was a mark against it. According to Aristotle, such “inductive arguments” were a constant feature of dialectic as practiced by Socrates.

As a matter of fact, no one in any of Plato‘s early dialogues manages to propound a definition that survives this test. They all are rejected for inconsistencies to which they lead on examination. This sometimes has misled readers into thinking that Socratic dialectic had only a negative purpose. It would seem that by showing someone his inability to defend and explain his view without falling into inconsistency with himself, the primary purpose was to reveal his ignorance of some matter that he may have thought he understood. But though the early dialogues may all end in such professions of ignorance, and though it is no trivial or uninteresting accomplishment to uncover ignorance where it exists unnoticed, it seems that Socrates had higher hopes for his method than this. In principle, at any rate, he always stood ready to discover that someone held opinions whose consequences, as he developed his views, were wholly consistent. If he withstood the most searching cross-examination to which Socrates might subject him, then, it seems, Socrates would accept his ideas on the subject under discussion as constituting genuine knowledge of it, and therefore as true. The increase of one’s self-knowledge by being made aware of one’s ignorance was only the first lesson the practice of dialectic could impart. By repeated attempts to reflect on and reorder one’s ideas in the face of previous failures to survive dialectical examination, one might hope at last to withstand successfully the investigation and thus come into the secure possession of real knowledge. It is hardly surprising that this Socratic knowledge is never attained in any of Plato‘s early dialogues. Nevertheless, the possibility of it seems to be an assumption integral to Socrates’ practice of his dialectical method.

In his discussions it was always the other person who put forward a thesis for examination, never Socrates himself. It was always the other person’s ideas that were being tested. Socrates’ famous irony consisted in part in his constant refusal to claim to know anything himself, to have any settled philosophical views of his own. Considering the stringent requirements which, as just noted, he imposed on true knowledge, this refusal seems only prudent. In examining others he always professed to be merely seeking for the truth, without admitting the possession of any. He seems actually to have claimed for himself the role of midwife to others’ ideas, as he is made to do in Plato’s Theaetetus, in this symbolic way adopting his mother’s profession. Just as midwives are past the time of childbearing themselves, so Socrates, the intellectual midwife, could have no brainchildren of his own.

Nonetheless, certain theses are traditionally associated with his name, in consequence of their being fairly clearly attributed to him in early dialogues of Plato. These are conventionally referred to as the three “Socratic paradoxes”: virtue is one; virtue is knowledge; and no one knowingly does what is bad. By holding that virtue is one, he meant that each virtue is essentially no different from any other virtue. Courage, for example, though it seems to show itself in a limited set of circumstances and conditions, is on closer examination really the same thing as justice, or temperance, or holiness, which show themselves in entirely different circumstances, peculiar to each. This follows from his view that virtue is knowledge. To be just or courageous is to know how to act in certain types of situations.

But to know, and not merely have a correct idea of, how to act is to understand why acting in those ways is best; and understand this fully foi any given type of action and situation requires that one should have a comprehensive understanding of what human good is in general. The essential condition for any single virtue, namely, a comprehensive knowledge of human good, is also the condition for each of the others. Thus, because the knowledge that constitutes any given virtue equally constitutes each of the others, it turns out that the virtues are a unity and that a person cannot really have any single virtue without having them all.

The identification of virtue with this comprehensive knowledge of human good leads directly to the third paradox, that no one knowingly does what is bad. Clearly, if one is truly virtuous one will always act well and never badly. Therefore Socrates’ theory makes virtue identical with knowledge of how to act, based on a comprehensive understanding of human good, his view implies that if one possesses this knowledge one will always act well and never badly. Knowledge thus turns out to be the sufficient condition of acting virtuously and well. No one who fully understands what human good is and knows that attaining this good requires acting courageously, temperately, justly, and so on can possibly act in any other way. This feature of Socrates’ thought is often criticized as being “intellectualist,” meaning that it makes virtue identical with the mere understanding of certain truths and ignores or denies the gap between knowing what to do and deciding to do it. 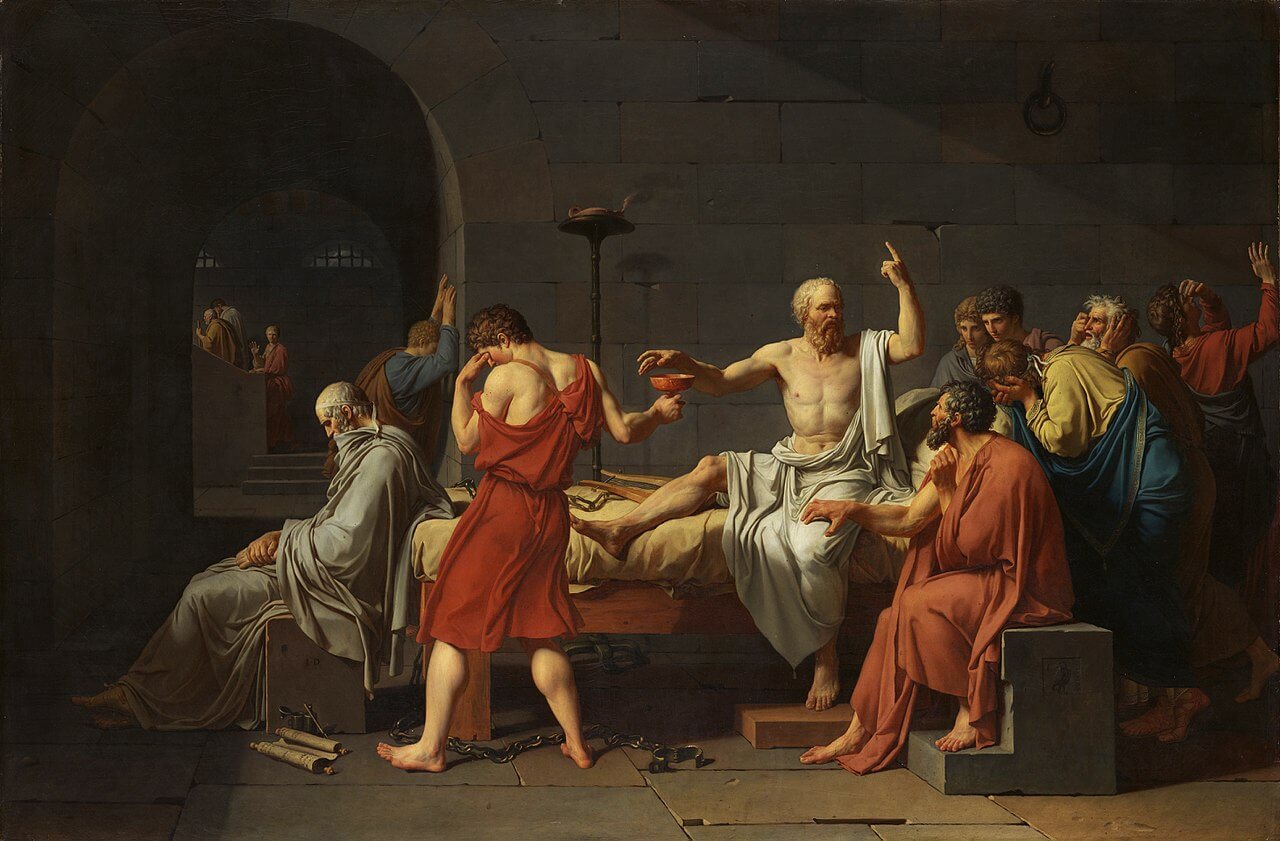 The Death of Socrates, by Jacques-Louis David (1787)

Socrates attracted to himself many of the brightest young men of the Athenian aristocracy, and many foreigners as well. His deep-seated attachment to the virtues of temperance, justice, and courage, his refusal to be dogmatic about them or about anything else, and his constant willingness to rethink and reargue any question anyone might raise made him a powerful and inspiring figure. Not only Plato, much of whose philosophical activity was devoted to working out in systematic fashion the implications of Socrates’ practice of his dialectical method, but many others were inspired by his teaching and example to give themselves up to philosophy.

Among the so-called minor Socratics were Euclid of Megara, who formed a school in that city, the Athenian Antisthenes, and Aristip-pus of Cyrene. The Megarians were acute dialecticians and theorists of logic, whose investigations contributed largely to the theories of necessity and possibility developed by Aristotle and after him by the Stoics. Antisthenes took over the ascetic side of Socratic ethics, carrying it to the extremes later characteristic of the Cynics, who regarded themselves as successors of Socrates through Antisthenes. Information about Aristippus is uncertain, but he may have taught a hedonistic ethics loosely derived from the Socratic emphasis on the connection between virtue and human good.

Socrates nas continued to be a figure of considerable fascination for philosophers, most often perhaps as providing confirmation for some of their own philosophical views and procedures. In the 19th century, Hegel saw in Socrates the first affirmation of his own view of the task of philosophy as the development of explicit and critical self-consciousness. Kierkegaard in The Concept of Irony found in Socrates’ dialectical method both the practice of that “indirect communication” that was so characteristic of himself and the belief that “truth is subjectivity.” Nietzsche, like Hegel, also regarded Socrates as a pivotal figure in world history. The formation of Nietzsche’s complex and ambiguous attitude toward Socrates particularly in The Twilight of the Idols and The Birth of Tragedy, played a key role in the construction of his own philosophical ideas.

In the 20th century, Socrates has been claimed both by existentialists and by analysts of ordinary language as foreshadowing their own ideas. Socratic philosophy continues to be a rich and living heritage.