RUSSIAN LANGUAGE, the most important branch of the Slavonic family of languages in the Indo-European group. As the principal language of the Soviet Union and one of the fîve official languages of the United Nations, Russian has great international importance. Despite its rather formidable grammar and unfamiliar alphabet, the Russian language is simple and direct and admirably suited to every purpose that a modern language serves. Its literature, both prose and poetry, is among the greatest in the world, boasting such names as Tolstoy, Chekhov, Gogol, and Turgenev.

Russian is one of the eastern group of Slavonic languages. It is spoken by the largest of the Slavic races, the Great Russians. Great Russian should be carefully distinguished from the other members of its group, Little Russian, or Ukrainian, and White Russian, or Belorussian.

Russian is an excellent key for understanding such languages for the southern Slavonic group as Bulgarian, Serbo-Croatian, and Slovenian. Polish and Czech are in the western Slavonic group, but these have been influenced more by Latin than any other Slavonic language and hence have deviated further from the original Slavonic. 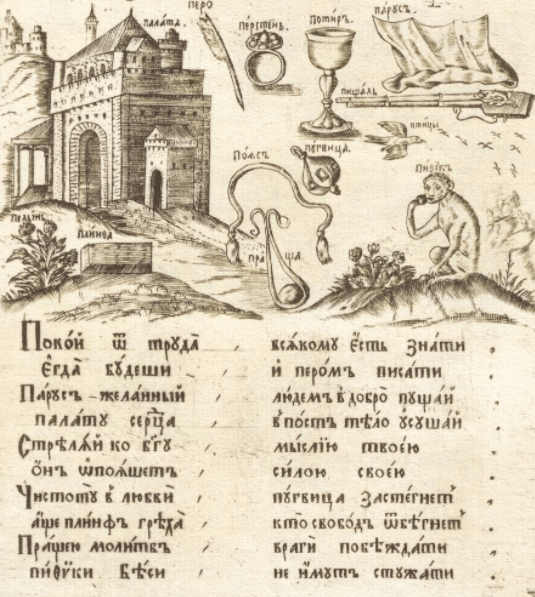 The morphological and syntactic development of Russian is made somewhat difBcult to trace historically by the fact that Old Bulgarian, spoken by tribes along the Volga, became the ecclesiastical and literary language and remained so until the 17th century. Very early, however, the local spoken Russian of Kiev influenced Church Slavonic (Old Bulgarian) in both pronunciation and vocabulary, and in turn Church Slavonic affected the vernacular. Church Slavonic elements may stili be observed in the Russian language, especially in phonetic and morphological peculiarities in words connected with intellectual and religious life. Church Slavonic, in a considerably modified form, of course, has remained the language of the Russian Orthodox Church: the Scriptures were written in it, and it was the language of church services up to the latest times. Thus, the history of Church Slavonic resembles in many of its aspects the history of Latin in the Roman Catolic Church.

The earliest written literature, chronicles and judicial documents, employed a language that was an admixture of the vernacular and Church Slavonic. In the 14th century Moscow displaced Kiev as a cultural center, and the local speech of Moscow, a combination of southern and northern dialects, influenced the written language. However, Church Slavonic stili continued to influence the written language, though on a diminishing scale, until the 18th century. At that time, the great scientist, philologist, and poet Mikhail V. Lomonosov pointed out in his Russian Grammar the dependence of the literary language on Church Slavonic, a fact that had not been scientifically studied before. The literary language now began to fail more in line with the spoken language. Toward the end of the 18th century and the beginning of the 19th, especially through the efforts of Nikolai M. Karamzin and Aleksandr Pushkin, a literary norm for the Russian language was established.

Russian is an extremely rich language, and by virtue of its structure capable of expressing the subtlest nuances of thought. Only a great people, said Ivan S. Turgenev, could possess such a language. As a member of the Indo-European family, Russian has developed in much the same way as other members of this family. As an inflected language, it resembles Latin and Greek in morphology.

The Russian, or Cyrillic, alphabet can be mastered in one lesson. Both Russian and Church Slavonic use the same alphabet, except that Peter the Great simplified the letters of Russian in 1708 by bringing them into closer conformity with the easier Latin letters of the West. Thus there is a current form known as the “civil alphabet” and the Church Slavonic alphabet, which is called Kirilitsa.

The civil alphabet was simplified stili further after the 1917 Revolution. Before then there had been 36 letters, not counting the e, which is not a separate letter and rarely occurs in this form except in grammars and texts intended for foreigners. In 1918 the Soviet government issued a “Decree on the Introduction of the New Orthography,” which rejected as redundant four letters of the old alphabet. Hence the present alphabet has 32 letters. The decree effected further simplification: the hard sign was abolished at the end of words; a clarifying difîerentiation was introduced for spelling certain prefixes before unvoiced consonants; useless variations in the genitive endings of adjectives, pronouns, and participles were abolished; uniformity was given to the two nominative and accusative plural endings of all three genders; the masculine and neuter form of the third person plural pronouns was substituted for the old feminine form; the masculine and neuter form of the word “one” replaced the old feminine form; the genitive singular of the feminine personal pronoun became the same as the accusative. All these changes unquestionably made for simplification, and, as a result of such modifications, Russian became one of the most nearly phonetic languages in Europe.

The pıonunciation of Russian is not difficult. The chief obstacle for a person speaking a western European language is his tendency to make soft combinations hard. Before e and i, and before vowels beginning with y, such as ya, ye, and yo, all consonants, especiaJly the dentals, are palatalized. This means they are sounded not with the top of the tongue pressing against the back of the teeth, but by touching the palate with the tongue higher up. Another difficulty is the hard l before a, o, and u. This is not pronounced as in English with the tip of the tongue at the root of the teeth, but rather with the tip of the tongue just touching the teeth. The uvula then vibrates, producing a kind of guttural l similar to a guttural r. Other sounds offer no particular difficulties.

However, a real obstacle for non-Russians learning the language is the variation in stress in Russian words. No definite rule for placing the stress is possible as in other Slavonic languages such as Polish and Czech. The stress is not always placed in the same position in the inflected forms of a single word. A few helpful generalizations regarding stress may be stated:

Incorrect stress may sometimes lead to misunderstanding, especially in pairs of words that are spelled alike but stressed differently. Accurate handling of stress in Russian words can come only after an individual has had long experience in speaking the language.

Russian has comparatively few sounds that do not occur in English, and the variations in sound represented by each letter are usually regular. One peculiarity of the sound system is that there are two sets of vowels: hard vowels and soft, or “jotated,” vowels. Pronunciation of a hard vowel varies according to whether it is stressed or unstressed and, if unstressed, according to its position in regard to the stressed vowel in the word. A soft vowel, whether it appears initially or follows another vowel, has the same range of sounds as the corresponding hard vowel but is preceded in each case by the sound “jot.” There is a system of vowel mutation governed by definite rules, and also a regular system of consonant mutation, which likewise has its own rules.

The Russian noun has three genders, two numbers, and six cases (a seventh, the vocative, exists only in a few survivals). The genders are declined differently, but their plurals are virtually identical except for the genitive case. The neuter singular differs little from the masculine, but the feminine declensional forms are entirely different. A peculiarity in inflection is that words with soft endings are declined soft throughout. And there are many variations in the genitive and prepositional cases, owing chiefly to a confusion of the historic o and u declensions. During historic times Russian lost many of its grammatical forms, which can stili be studied in Church Slavonic. One of these is the dual, which stili exists in a sense after the numerals “two,” “three,” and “four,” when the noun stands in the genitive singular, because that form frequently corresponded to the nominative dual.

In Russian, the attributive is transformed into the corresponding adjective or participle. Hence Russian is richer in adjectival forms than the languages of the West. Numerals are fully declined and are quite difficult. Although the nominal declension is complex, its syntactical application is rather simple, since an abundance of cases, each with a distinct function, obviates certain difficulties that are present in a language without grammatical endings.

The verb system is an interesting combination of simplification and complexity. Little has survived of the intricate structure of the verb system in Church Slavonic, with its aorist and multiplicity of past tenses. Only one unconjugated past is left. The ordinary future is a compound of 1 shall and the infinitive, but in a large class of verbs, the present does duty for the future.

There are two conjugations, a wealth of participial forms, and gerunds from the old masculine nominative singular. As though to compensate for this relative simplicity in the conjugational system in a highly inflected language, a curious mechanism exists by which these few verbal forms are able to express by means of aspects most of the shades of meaning expressed in English through the tense structure.

Russian does not ordinarily use the passive voice, and it has a very simple way of expressing the subjunctive with an unconjugated past tense and the addition of a particle. A reflexive is also used, which does not differ from the rest of the verbs, except for the addition of the unchanged reflexive ending.

The influence of Church Slavonic (Old Bulgarian) on spoken and written Russian has already been pointed out. Other foreign influences may be noted. Tatar has contributed names for many Oriental objects, such as weapons, garments, jewels, and some terms concerned with government. A few words have come from Finnish, and a good many words dealing with manners came from the more refined literary Polish.

Many Dutch and German words were imported after Peter the Great “opened his window on Europe.” By the 18th century, which saw a full cultural rapprochement with the West, numerous words had been introduced. Most of them were French, but some were English or German. From that time also loanwords from international scientific terminology entered the Russian language. Since 1917, with the overthrow of the czarist regime, the Soviets have evinced a partiality for American words, not a few of them slang.