What is the structure of fern plant? Information on fern roots, spores, leaves, stems ans sporangia.

Both external and internal structure are important in the study of ferns, as are both microscopic observations and those made with the unaided eye.

Spores generally are smaller than 0.002 inch (0.005 cm) long and develop in groups of four. Those formed in one plane are usually elongate with a single suture that cracks open upon germination. Those arranged in a tetrahedron are often roundish or somewhat tetrahedral with a triradiate suture. The surface of spores is smooth, pitted, ridged, or spiny. Some have a covering, often winged, that is called a “perispore.” Besides the nucleus, which contains the hereditary material and governs all the activities of the cell, spores often contain oil droplets and sometimes chlorophyll.

In most orders of ferns the vegetative portions of the gametophytes are thin, heart-shaped, and about 0.25 inch (0.6 cm) long or are much branched and threadlike. All have spherical or somewhat tubular sex organs. Most gametophytes grow on soil, rocks, or on other plants, are short-lived, and contain chlorophyll. The Marattiales have relatively thick and long-lived gametophytes. The Marsileales and Salviniales have highly evolved gametophytes consisting of microscopic, thin-walled antheridia or archegonia without vegetative tissue. The Ophio-glossales have massive, cylindrical, or flattened, long-lived, subterranean gametophytes. 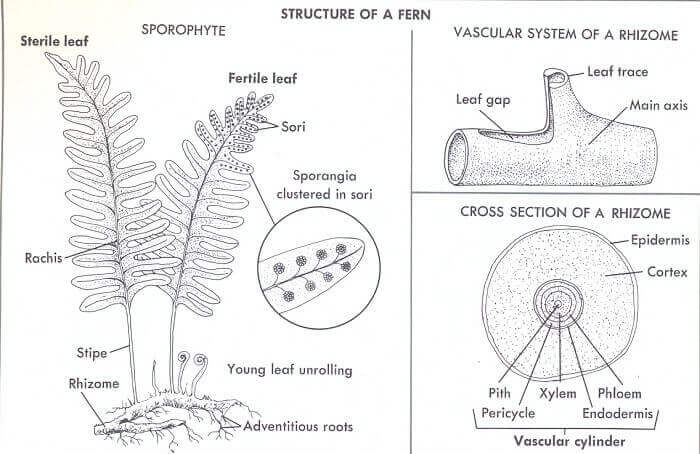 The roots of mature fern plants have a cluster of xylem cells, usually at their center, which conduct water upward to the stem. Groups of phloem cells that conduct food downward lie next to the xylem. One to a few rows of peri-cycle cells, from which branch roots originate, lie outside the xylem and phloem and within the endodermis, which controls radial water flow. External to this vascular cylinder is a thick layer of parenchymatous cortex bounded by an epidermis, usually with root hairs.

Fern stems are creeping or erect and vary in diameter from less than 1/16 inch ( 1/5 cm) to about 2 feet (3/5 meter). Most ferns have only a simple or branched underground stem, called a “rhizome.” Some ferns have stems that creep along the ground or on other plants, and a few ferns have thick, tall, erect trunks.

The simplest fern stems have a vascular cylinder, which consists of the water-conducting xylem surrounded by food-conducting phloem, with unspecialized parenchyma cells occupying the remaining space. Usually the vascular cylinder is bounded by an endodermis, which controls the radial flow of water. The xylem may in thin or juvenile rhizomes be a solid cylinder (protostele). In larger rhizomes it is a tube with occasional leaf traces (vascular supplies to the leaves) departing outward. Each is associated with a gap in the otherwise solid surface of the tube (siphonostele). In many cases several gaps occur at a single cross section of the rhizome, resulting in a much-dissected tube (dictyostele). Very large rhizomes may have several concentric siphonosteles or dictyosteles.

External to the vascular cylinder is usually a thick cortex made up largely of parenchyma cells. The epidermis, which surrounds the cortex, sometimes produces hairs, glands, or scales. Hairs are one cell wide and one or more cells long. If the hairs produce a waxy exudate, often from a swollen terminal cell, they are called “glands.” Scales are many cells wide and long but usually only one cell thick.

Fern leaves usually develop tightly rolled and grow from apical cells at the tip of eafch leaf and leaflet. Therefore they mature from the base upward and outward.

Fern leaf blades vary considerably in size and shape. Some are small and grasslike, while others are many feet long and made up of many leaflets. Most ferns have blades that are pinnately compound. The leaflets arise from both sides of the principal axis, or rachis. A few species have palmately compound leaves, with axes radiating from a single point. Some appear equal-forked but have a resting bud in each fork. Blade texture may be papery, leathery, fleshy, or rigid. Some species have leaves with veins (vascular bundles) that are forked, often repeatedly; in others the veins form a network. Hairs, glands, scales, or some mixture of them may be present on various parts of the leaves. Some ferns have fertile and sterile leaves that are alike. In other species the fertile and sterile leaves differ in height or shape. The fertile leaves usually have less expanded blades than the sterile leaves. The petioles, or leaf stalks, vary in size from as narrow as a thread to 2.5 inches (6.2 cm) in diameter. Some petioles are often round in cross section and have a single vascular trace (vascular supply in the leaf), whereas large ones are often U-shaped and have two to many traces. Most ferns have many strands of hard, thick-walled sclerenchyma cells that, with the vascular traces, stiffen the petioles.

In a few species the sporangia, which contain the spores, are scattered on the underside of the fertile leaves. In most species they are aggregated into sori along the veins or at their ends on the underside of fertile leaves. The sori appear as brown dots or lines. In a very few species the sori are fused in two rows into synangia. Some ferns lack any protection for the sori, but others have a flaplike or umbrella-shaped membrane, called an “indusia,” developed from the leaf surface. In some ferns a flaplike modified leaf margin protects the sori.

Most sporangia have a group of unequally thickened cells that aid in cracking open the sporangium. These cells constitute the annulus.