Chester Alan Arthur; (1830-1886), 21st president of the United States. He is remembered as the political spoilsman who, falling heir to the presidency, surprised his country with an honest administration. President Arthur supported and signed into law the reform Civil Service Act of 1883, which established a merit system of appointment to federal employment.

Chester Alan Arthur was born in North Fairfield, Vt., on Oct. 5, 1830. His father, William Arthur, emigrated from Ireland and, after teaching school in Vermont and Canada, became a Baptist minister. His mother, Malvina Stone, was a descendant of English settlers in New Hampshire. 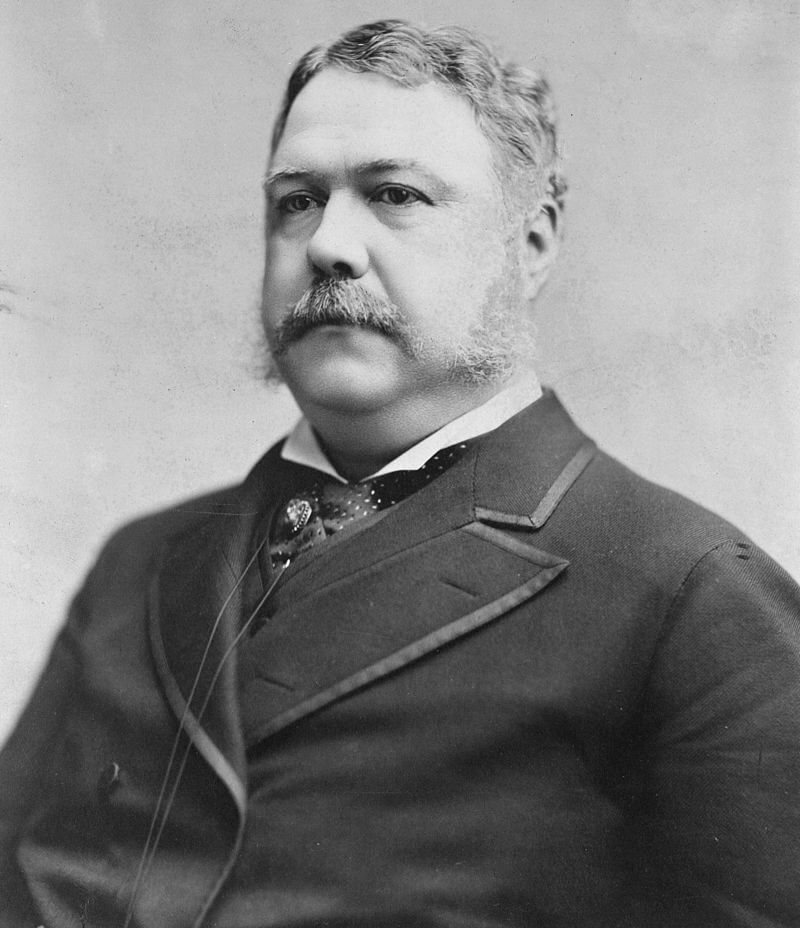 Young Arthur entered Union College at Schenectady, N.Y., at the age of 15. After his graduation in 1848 he studied law at home and earned his living as a teacher at North Pownal, Vt., and as principal of the academy at Cohoes, N.Y. He received his final training in New York City at the law office of Culver and Parker. Admitted to the bar in 1854, he formed his own law firm in 1856.

Soon after his arrival in New York City, Arthur became associated with the newborn Republican party, joining its ranks to make acquaintances and to find new clients. On Oct. 25, 1859, he married Ellen Lewis Herndon, who bore him three children, one of whom died in childhood.

Arthur worked assiduously for the reelection of Edwin D. Morgan as governor of New York, and when Morgan won in 1860, Arthur was given the post of state engineer-in-chief. In 1861, after the outbreak of the Civil War, he became the state’s assistant quartermaster general, with responsibility for supplying barracks, food, and equipment for the New York militia. On July 27, 1862, three weeks after President Lincoln’s call for 300,000 more men, he was advanced to the state quartermaster generalship.

When Governor Morgan was succeeded by the Democrat Horatio Seymour in 1863, Arthur returned to his law practice, but he retained close association with the city’s Republican organization. The boss of the state’s Republican political machine was Senator Roscoe Conkling. Arthur supported him, becoming one of his chief henchmen. Conkling obtained from President Grant an appointment for Arthur as collector of the port of New York; thus, in 1871, Arthur became the head of the customs house, a post that enabled him to give jobs to thousands of Republicans. Though personally honest, Arthur closed his eyes to unethical practices, incompetency, and graft in his office. During his first three years as collector his yearly earnings, mainly from percentages of fines, averaged $40,000.

In 1877, the year President Hayes took office, an investigation of the customs house was undertaken, and its lax management exposed. A prolonged and bitter fight between the New York party machine and Hayes ensued. Finally, Arthur was removed from office in 1878. 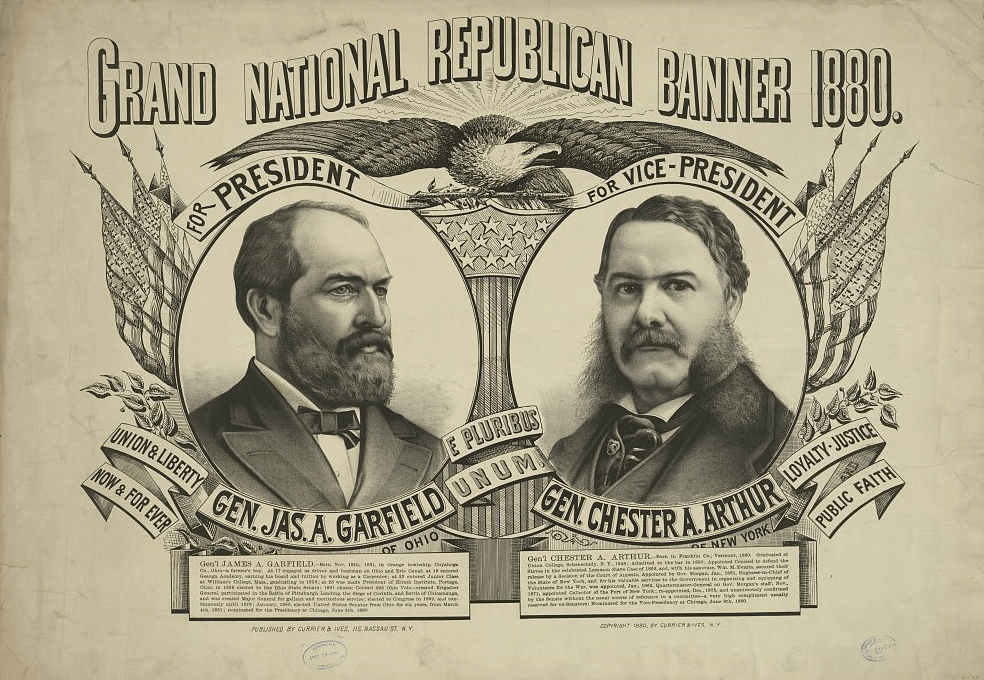 At the Republican National Convention of 1880, Conkling’s “stalwart” faction (which took the name by contrasting their own “stalwart” Republicanism with that of the reform elements in the party) supported former President Grant’s nomination for a third term. Arthur was one of the 306 “stalwart” delegates who voted for Grant until the last ballot. However, the convention choice for president was James A. Garfield. To conciliate the defeated stalwarts, Arthur was suggested for the vice presidency. Conkling .told him: “If you wish for my favor and my respect you will contemptuously decline it [the nomination].” But Arthur replied: “Senator Conkling, I shall accept the nomination and I shall carry with me the majority of the delegation.” And he did.

After the election of the Garfield-Arthur ticket, the issue of the New York patronage flared up again. Conkling expected the new president to consult him on all federal patronage in New York State, and in this demand Arthur backed the senator, his old boss. When President Garfield stubbornly refused, both New York senators—Conkling and Thomas Piatt—resigned their seats, mistakenly anticipating speedy reelection by the legislature. Meanwhile, a deranged office seeker, Charles J. Guiteau, shot President Garfield on July 2, 1881, exclaiming, “I am a Stalwart of the Stalwarts. Arthur is president now.”

During the whole summer Garfield lay between life and death. Late on September 19 he died, and early the next day Arthur took the oath. “Chet Arthur, President of the United States! Good God!” exclaimed a Republican, expressing a widely held feeling.

But those who feared that under Arthur the spoils system would become rampant and that political bossism would be the order of the day were to be much surprised. As chief executive, Arthur showed great responsibility. He filled federal offices with competent men, even though they were of the “stalwart” faction, and Conk-ling did not become the power behind the throne.

Arthur as president would not be the henchman of anyone. He gave the country an honest administration. His legislative program was moderate; he asked for tariff revision, for a reduction of excise taxes, for funds to rebuild the obsolete Navy, and for the creation of an up-to-date merchant marine. But Congress gave little heed to his recommendations. Despite the tremendous surplus pouring into the Treasury, taxes and tariff duties were not reduced.

President Arthur continued the prosecution of the Star Route swindlers in the Post Office Department, who had received large cutbacks from mail contractors. He vetoed a huge “pork barrel” appropriation of almost $19,000,000 for the improvement of rivers and harbors because he considered it to be wasteful and improper. He also vetoed a Chinese Exclusion Bill barring Chinese nationals from admission as immigrants to the United States, holding that the legislation was inconsistent with the existing treaty with China. Both presidential vetoes were overridden by Congress, however. Another law passed during his administration was the Anti-Polygamy Act, aimed at the Mormons in Utah. 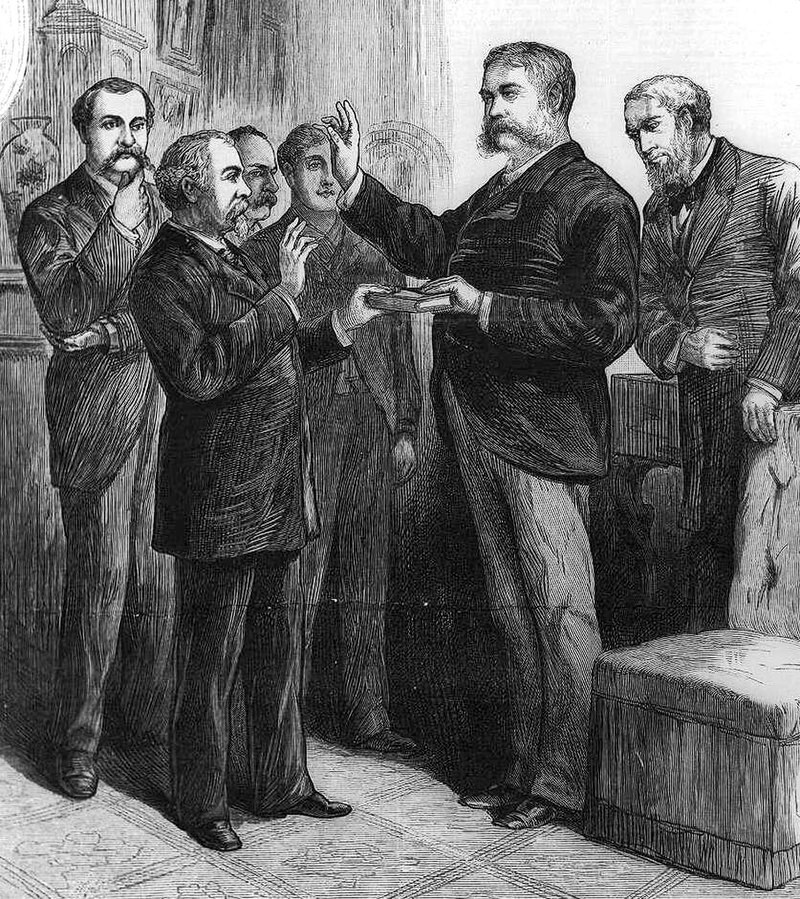 In the midterm elections of 1882 the electorate gave the Democrats an overwhelming majority in the House, while in the Senate the Republicans had a scant majority. In the New York gubernatorial election the president threw his weight behind the candidacy of Charles J. Folger, and when Folger was defeated by the obscure mayor of Buffalo (Grover Cleveland), Arthur’s political influence suffered so badly that his nomination for the presidency “in his own right” became improbable.

The lame duck session of Congress passed the Pendleton Civil Service Act, the first’ great step toward a merit system. It became law under Arthur’s signature on Jan. 16, 1883.

As Arthur’s administration neared its end, public opinion about him changed. Many critics turned into supporters. Mark Twain said: “I am but one in 55,000,000; still, in the opinion of this one-fifty-five millionth of the country’s population, it would be hard to better President Arthur’s administration. But don’t decide till you hear from the rest.”

Arthur naturally hoped that the Republicans would nominate him in 1884. But as he had the support neither of the reform wing nor of the party bosses, his candidacy became an idle hope. On the first ballot he had 278 votes against frontrunner James G. Blaine’s 334 Vz, but on the fourth ballot the prize was Blaine’s, with 541 votes against Arthur’s 207. Blaine lost the election to Grover Cleveland.

His term completed, Arthur returned to his New York law practice. A year and a half later— on Nov. 18, 1886—he died in New York City of Bright’s disease.

Aside from the quality of his administration, Chester A. Arthur will be remembered for being the most elegant and best-dressed president, in whose closet hung some 80 suits. Nicknamed “The Gentleman Boss,” he read Scott and Thackeray, was an inveterate fisherman, enjoyed parties, and had an epicure’s taste in food and drink. Handsome, dignified, and genial, he was a conscientious administrator, but never an inspiring leader of men.