What Happens To Heat During Phase Changes? How does melting and freezing occur and what is the role of heat during change of states? 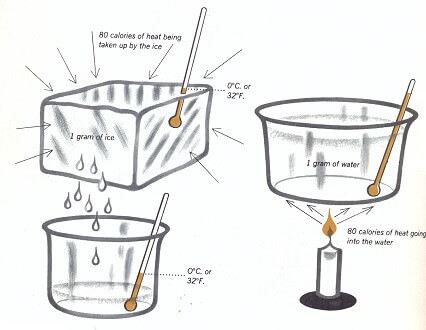 We are likely to think that heating always raises the temperature of things. But heating can also cause a change of state without raising the temperature of a material. When ice melts, heat is absorbed. This heat makes the molecules move about more freely so that they form a liquid. To change 1 gram of ice to water takes about 80 calories of heat. Instead of getting warmer, the wata stays at the same temperature as the ice until al of the ice is melted. If 80 calories of heat are then added to 1 gram of the water, it will be heated to 80° C., or 176° F. At this temperature, water is hot enough to burn your hand.

When any solid melts, heat is absorbed. This heat is taken from the materials around the melting solid. However, the amount of heat is not the same for all solids. For example, only about 35 calories are needed to melt 1 gram of paraffin. Ice uses more heat in melting than does almost any other solid. While each gram of ice is melting, it absorbs about 80 calories. So melting ice removes a large amount of heat from whatever is near it. When ice is put into water, the heat that melts the ice comes from the water. As this heat is given out, the water is cooled. 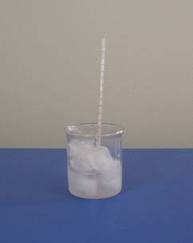