Air currents support huge numbers of pollen grains and transport them to great distances. Pollen grains of sedges, grasses, birch, and oak have been collected in traps in the air over the middle of the Atlantic Ocean. The pollen of sugar beets is regularly borne to a distance of two or three miles by wind and is carried aloft in abundant quantities to over 2,000 feet. Air currents carry the pollen grains singly in a highly dispersed condition.

Wind-pollinated flowers possess no bright colors, no special odors, and no nectar. In most of them the petals are highly aborted or absent. The stamens and stigmas are thus exposed as much as possible to the air currents. The grouping of stamens and carpels together in the same flower, which is an economical arrangement in animal-pollinated flowers, has no special value for wind flowers. The sexes are, in fact, frequently separated into staminate and carpellate flowers which are borne either in different parts of the plant or on different individual plants. 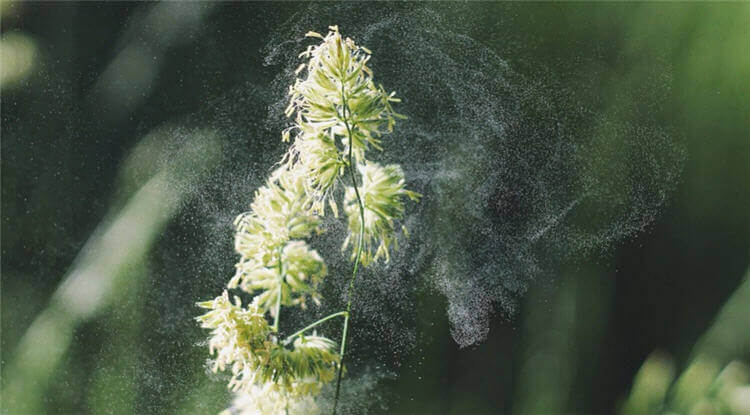 The stamens are usually well exserted at maturity so that the pollen, which is produced in huge masses, is picked up by the air currents. Air-borne pollen grains have a smooth outer skin which permits them to fall separately like light powder. They are transported singly by air currents and are caught singly by the well exserted, feathery, brushy or fleshy stigmas.

Each pollination consists of the meeting of about one pollen grain with one stigma and leads to the fertilization of one ovule to each flower. Most wind-pollinated plants have single-seeded fruits. The oak flower produces one acorn, the grass flower one grain. In this respect wind flowers contrast with animal-pollinated flowers which ripen numerous seeds on the basis of the masses of pollen brought to the stigma in one or two visits. The only way in which wind-pollinated plants can obtain a high fecundity is by the production of large numbers of pollen-catching flowers.

Some aquatic plants accomplish pollination by means of water currents. As in plants which allow their pollen to be carried by air currents, the flowers are colorless, odorless, and unisexual. The thin-walled, elongated pollen grains may drift submerged to the stigmas, as in eelgrass, pondweed or poolmat (Zannichellia), and naiad (Naias). Or the male flowers may become detached from the parent plant and float on the surface of the water in the manner of little boats. Some of them, drifting with the currents, come to lie alongside the female flowers, where their pollen is taken up by the stigmas. This arrangement is found in wild celery (Vallisneria) and elodea. 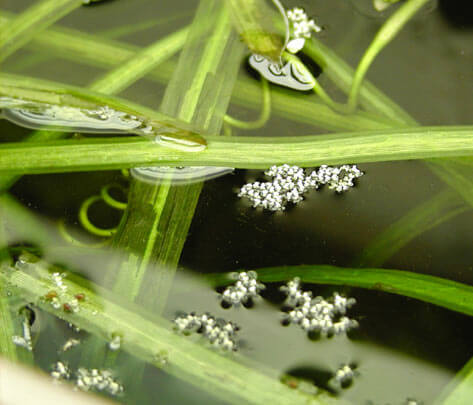 Rain water brings the pollen to the stigmas in some terrestrial plants which inhabit rainy northern climates where insects are scarce. In several kinds of buttercup, marsh marigold (Caltha) and bog asphodel (Narthecium) the floral cups become filled with rain water, but do not overflow because the surplus water is drained off along the base of the petals. Pollen, coming to float on the surface of the water, is sucked by capillarity up the carpels to the stigmas. This process, so far as is known, only brings about self-pollination; however, the possibility exists that the splashing of the rain drops may occasionally cause the pollen grains to be dispersed into other nearby flowers where cross-pollination may result.