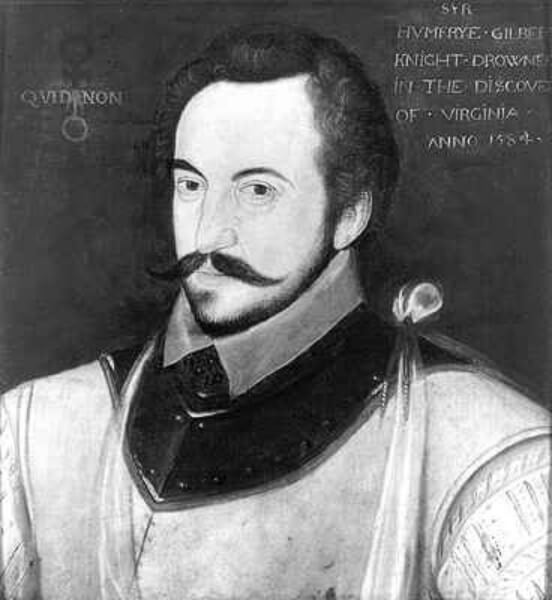 Sir Humphrey Gilbert (1539 – 1583). In the time of Queen Elizabeth I, many of the younger English country gentlemen, particularly members of the families which owned land in Devon and Cornwall, went adventuring overseas. Walter Raleigh and Richard Grenville were men of this kind and so was Humphrey Gilbert. He was born near Dartmouth, went to Oxford University and then fought in Ireland and the Netherlands. He was for some years a member of parliament.

Like most educated Englishmen of his time he was interested in the Portuguese and Spanish discoveries abroad. He learned ali that he could about these and discussed them with sea captains in Devon and scholars in London. He wrote a book  To prove a Passage by the North-West to Cathaia, and the East Indies. In other words he believed that it was possible for ships to sail past the north coast of the American continent in order to reach China and islands such as Java and Sumatra. He also sent a petition to the Queen asking to be allowed to find this route.

In 1578, the first of his two voyages achieved little. Five years later he sailed again and this time reached Newfoundland. This island, which is now part of Canada, was already known to French and English fishermen. Gilbert landed near St. John’s; claimed the island for the Queen and started a colony of Englishmen there. This was the first step towards the building of the British Empire, which has now become the Commonwealth. Two of Gilbert’s ships had deserted on the outward voyage and one was wrecked while exploring the coast. His own ship, the “Squirrel”, was lost in a storm on the return journey and he and his crew were drowned, so only one of his fleet of five reached England again.