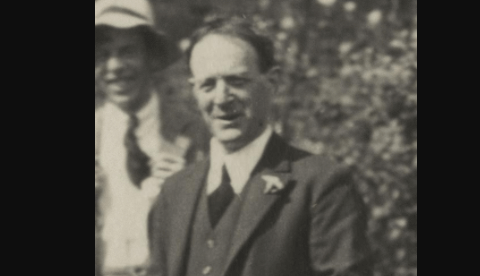 Walter De La Mare; (1873-1956), English poet, novelist, and short-story writer, whose work is evocative of unseen presences and contains vivid descriptions of dreams as well as familiar settings. For de la Mare, the world of the imagination was as actual as the world of the senses.

Walter John de la Mare was born at Charlton, Kent, on April 25, 1873, and was educated in London at St. Paul’s Cathedral Choir School. From 1890 to 1908 he worked in London in the accounting department of the Anglo-American Oil Company. During these years he published, under the pseudonym “Walter Ramal,” stories and poems in periodicals, as well as the volume of poetry Songs of Childhood (1902), and under his own name, the prose romance Henry Brocken (1904). In 1908, de la Mare was awarded a yearly government pension of £, 100, which enabled him to resign his job and devote full time to writing. He died at Twickenham, near London, on June 22, 1956.

De la Mare’s work is characterized by his ability to retain, and to express with the control made possible by adult intelligence and traditional literary forms, the perceptive awareness, both physical and imaginative, of an alert child. His reputation as a leading Georgian poet was established by the volume The Listeners and Other Poems (1912), the title poem of which is probably his most celebrated single poetic work. Among his books of children’s verse and stories are Peacock Pie: A Book of Rhymes (1913) and Broomsticks and Other Tales (1925). His best-known novel is Memoirs of a Midget (1921); his collections of short stories include The Riddle, and Other Stories (1923), On the Edge (1930), and A Beginning, and Other Stories (1955).