Johann Gutenberg; (1395-1468), German printer, who is usually credited with the invention of printing from movable type. This invention was one of the most important landmarks in the development of Western civilization.

Gutenberg was born in Mainz, Germany, probably between 1394 and 1399. After early training as a goldsmith, he and Andreas Dritzehn became partners in a printing operation in Strasbourg in the late 1430’s. When Andreas died in 1438, his brothers sued Gutenberg for admission to the partnership in Andreas’ stead. It was denied, but evidence introduced in the suit indicated that the partners had been involved with a secret process that may well have been printing from movable type. However, if this process was perfected at Strasbourg, there is no printed evidence of the fact. 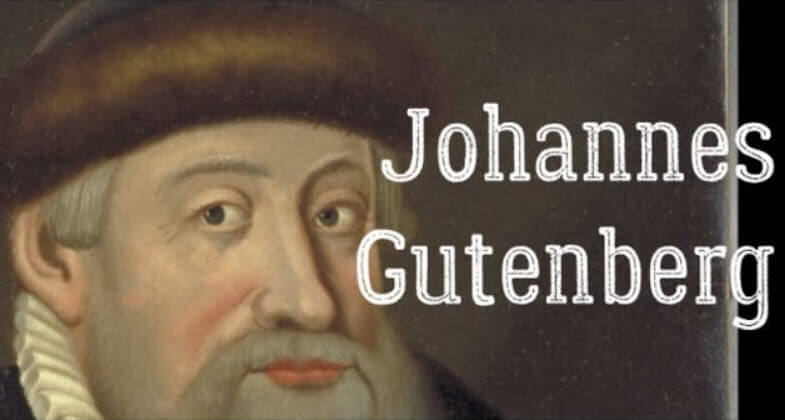 When Gutenberg returned to Mainz in 1448, he successfully demonstrated that printing from movable type as practicable, and Johann Fust, a rich lawyer of Mainz, was persuaded to invest heavily in Gutenberg’s enterprise in 1449 or 1450. With this backing, Gutenberg printed the “42-line” Bible (42 lines per column) that is regarded as the first substantial piece of printing to issue from a printing press.

From evidence presented in a lawsuit brought by Fust, who sought to recover his loans, it is known that Gutenberg’s printing office was taken over in November 1455 and subsequently operated by Fust and, later, his son-in-law Peter Schoeffer, one of Gutenberg’s early associates. Following the loss of his press, Gutenberg may have established another one in Mainz. An edition of Johann Balbus’ Catholicon, printed there in 1460, is frequently attributed to Gutenberg, as are other books and lesser works.

In October 1462, while Mainz was being sacked by its archbishop during a feud with a rival claimant, Gutenberg was expelled from the city. The archbishop later made amends, and in 1465, Gutenberg returned to his birthplace and was granted a pension and exemption from taxes. He died in Mainz on Feb. 3, 1468.

The 47 surviving copies of the Gutenberg Bible, of which 12 were printed on vellum, offer no direct evidence of the printer’s name, the place of printing, or the date. It is not definitely known whether or not this Bible was completed at the time Fust and Schoeffer took over Gutenberg’s press in 1455, but two dates written in a copy of it in the Bibliothèque Nationale in Paris indicate that it was available for sale before August 1456. Since several years must have elapsed before distribution was possible, Gutenberg’s role in the production was the primary one.

Of the 47 copies, 13 are in the United States. Their owners include the Library of Congress (vellum), the Huntington Library (vellum, lacking two leaves), the Pierpont Morgan Library (3 copies, one on vellum and lacking four leaves, and one containing the Old Testament only), the Yale and Harvard universities, and the New York Public Library.