What is the life cycle of a fly? The stages, anatomy and features of egg, larva, pupa and adult fly. The senses and behavior of adult fly. 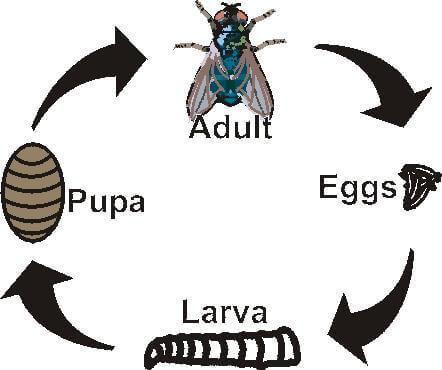 Life Cycle Of A Fly

Flies undergo complete metamorphosis; that is, their life cycle consists of four stages: egg, larva, pupa, and adult. There may be several generations a year, and the insect may spend the winter as egg, larva, pupa, or adult.

All adult female flies produce eggs even though a few, such as tsetse flies, hatch their eggs within the female’s body and keep the larvae in a sort of womb until they are fully grown. In general, fly eggs are small and whitish, and they are deposited in many types of places. They may be dropped onto the ground, inserted into crevices in plants or rotting wood, or pushed into decaying material, such as cow manure. The eggs of mosquitoes and other flies with aquatic larvae may be deposited in water, where they float about singly or in clusters.

The larval stage of the fly’s life cycle may be a few days, several months, or sometimes more than a year. Most of this time is spent feeding. Most larvae feed on decaying plant or animal matter. Some are predators, feeding on animals including other insects. As the larvae grow they periodically molt, or shed their outer covering. In the more primitive families there are five or six molts, and in the more highly evolved families there are usually three.

The more primitive families also differ from the more highly evolved families in the appearance of the larvae. Those of the more primitive families have a well-formed head and often bear pseudopods, or “false legs.” The larvae of the more highly evolved families either have a pointed head end and a blunt posterior end (“maggots”) or else are fat and fleshy, not pointed in the front (“grubs”). Most fly larvae have spiracles, small openings for taking in air. In maggots the posterior spiracles are very conspicuous and are used as a means of identifying members of the various families.

After a fly larva is fully grown, it undergoes pupation, a resting phase during which the larval features are absorbed and the adult features are formed. Pupae of primitive families show externally the shape of the head, wings, legs, and other adult features. Sometimes they are enclosed in a cocoon made of silk and usually covered with particles of sand or soil. In those species that have a maggot larva, pupation takes place inside the skin of the last larval molt, and the skin is known as a puparium.

Although the aquatic pupae of mosquitoes may swim about, the pupae of other flies are generally inactive. Their only movements are wriggling motions that enable them to push their way out of the soil or debris so that the adults will be able to emerge into open air. The pupae of robber flies and bee flies are equipped with strong thorns on the head and curved spines on the body.

The pupae of maggots remain quite immobile until the emergence of the adults. The puparium in which they develop is hard and resembles a brown seed. Unlike the pupae of more primitive flies, these pupae do not ensure the adult’s emergence into open air, and the adult has to push its way out. House fly and blow fly maggots often pupate in crevices and other inaccessible places so that when the adults emerge, they are sometimes unable to make their way out.

When pupation is complete and the adult structures are fully formed, the adult emerges from its cocoon or puparium. After its body and wings expand and harden, the insect is ready to fly away. In some species, such as the nonbiting midges, the adult stage is very short, lasting only a few hours. In most species of flies the adult stage lasts for a period of several weeks.