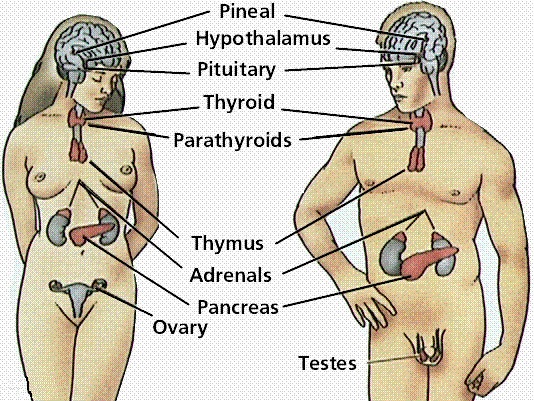 The substances produced by the endocrine glands are called hormones. The hormones are given off into the blood stream as the body needs them. You have already learned that the nervous system and endocrine system control all body functions. 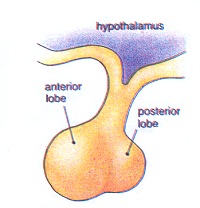 This is produced by the pituitary gland and regulates the growth of a child into an adult. Most of it is secreted from birth to puberty but it is also secreted throughout adult life. An over supply of the growth hormone results in a giant while if the supply is too low growth is stunted and the child is a midget.

This is located in the lower part of the neck in front of the trachea. It produces thyroxin hormone. The principal function of thyroxin is to regulate the production of heat and energy in the body tissues. It regulates the metabolism of the body. Metabolism is the rate at which cells convert food to energy. Your thyroid gland must have iodine in order to produce thyroxin hormone. The iodine content may be maintained by eating vegetables grown in iodine containing soils or by eating sea food. 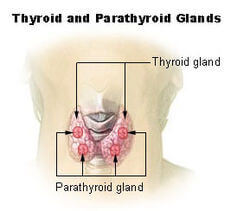 In certain regions the soil is deficient in odine. Lack of iodine may cause swelling of the thyroid gland. This is known as goiter. The use ofiodized salt in diets supplies iodine and prevents goiter. An enlarged thyroid does not produce enough thyroxin and this causes dry and puffy skin, loss of hair, a slower than normal heart beat, physical tiredness and mental dulness. Because the body does not oxidize food fast, enough the energy produced is lower than normaL. Their metabolism slows down and the person becomes fat.

If the thyroid gland is overactive the person become nervous and irritable, and remains thin in spite of an excessive appetite. This is because the body is burning up food at a rate that is faster than normal (the metabolism speeds up).

Calcitonin is another hormone produced by the thyroid gland. it works with parathyroid hormone to control the amount of calcium in the blood.

There are four parathyroid glands. Theyare located on the surface of the thyroid. These secrete a hormone called parathyroid. it is important in the regulation of caleium and phosphorus levels in the blood and tissues. Calcium and phophorus are minerals required for healthy bone growth and muscle contraction. When the blood calcium level drops, the parathyroids are stimulated to secrete parathyroid hormone. This hormone causes the release of calcium from the bones into the blood stream.

As light deficiency of this hormone results in low blood calcium levels. If the level is low, the muscles become hypersensitive and usually causes painful muscle contraction.

Oversecretion of parathyroid hormone results in the removal of calcium from bones to the point where they become brittle and break easily. it causes to much calcium to circulate through the blood. Muscle weakness, weight loss, fatigue and kidney stones can result.

This is a long narrow gland which lies in the loop of the duedonum. It produces insulin and glucagon hormones. Insulin is secreted when the amount of glucose increases in the blood. It regulates the amount of sugar in the blood and the storage of glycogen (a kind of carbohydrate formed from glucose) in the liver. A lack of insulin causes a disease called diabetes. A person with uncontrolled diabetes has more sugar in their blood and urine. The person feels himself very tired and weak. Diabetes is treated with injections of insulin which helps in the use of blood sugar by the body cells. The proper use of insulin under the direction of a doctor enables a diabetes patient to le ad anormallife.

These are located on the top of the kidneys. Each adrenal gland has an inner core, the medulla and an outer cortex. Adrenalin produced in the medulla regulates the body mechanism. The medulla is activated by stress, such as fear, anger or pain. When adrenalin is released into the blood stream, it causes rapid changes in heart beat, breathing rate and blood pressure. 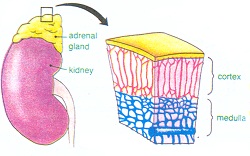 The level of blood sugar rises and the metabolic rate increases. It also makes the pupils of eyes larger, the hair to stand up and increases. the amount of sweating. Hormones produced by the cortex are aldosterone and cortisol. Aldosterone control s the salt and water balance in the blood. Cortisol influences metabolism, immune system and tissue repair.

Cortisone is a compound that is closely related to cortisol. Cortisone is produced syntheticaily and used as a drug for the treatment of arthritis and for counteracting the symptoms of allergies.

This is a small peasized structure attached to the brain just above the cerebellum. It produces a hormone called melatonin. The role of the melatonin hormone in humans is still uncertain.