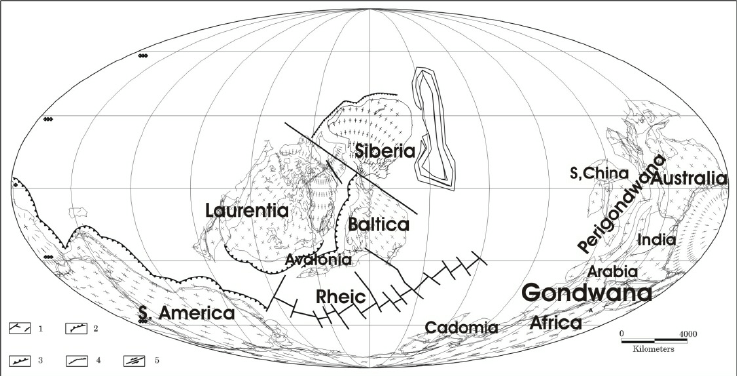 SILURIAN PERIOD, the third period of the Paleozoic Era and the system of rocks formed in its time span of some 20 million years, beginning approximately 430 million years ago.

Determination of the Period.

The name is derived from that of the Silures, an ancient tribe of south Wales. It was given to the formation in 1835 by the Scottish geologist Sir Roderick I. Murchison. (Tire sequence first so named, along the River Wye progressing downward from the base of the Old Red Sandstone, was later determined as of Devonian age.) At the same time the English geologist Adam Sedgwick, working in north Wales, was investigating rocks that he designated the Cambrian system. When it became apparent that the upper part of the rocks Sedgwick called Cambrian was composed of those that Murchison had included as the lowest part of his Silurian system, the rocks in question became the Lower Silurian of the survey that Murchison directed.

Subsequently the name Ordovician was applied to the controversial beds by an English geologist, Charles Lapworth, in 1879. The term included rocks now classed as in the Arenigian, Llanvirnian, Llandellian, Caradocian, and Ashgillian Series. The Tremadocian series was placed in the basal Ordovician in North America and Scandinavia, and the term Silurian was retained for the smaller Upper Silurian, which now includes Llandoverian, Wenlockian, Ludlovian, and Downtonian Series. Graptolites—floating colonial animals having minute individuals arranged along fine, ribbonlike, suspended structures—abound in some shales and were the diagnostic fossils in Lapworth’s studies. In North America, the Silurian system is commonly divided into three series, the Albionian, Niagaran, and Cayugan. Certain scientists regard the first series as merely a stage of the second, to be followed by the Clintonian and Lockportian Stages.

The Silurian in northwestern England and Wales consists of more than 2 miles (3 km) of graywackes and graptolite-bearing dark shales. Limestones are rich in corals, brachiopods, and bryozoans in the Wenlockian of western England. The island of Gotland off Sweden is so famous for its coralline limestones that the Silurian is called the Gotlandian system in several countries. The Caledonian orogeny, or period of mountain building, affected a belt extending through western Scandinavia into Scotland and Ireland at the period’s close.

In the eastern United States, erosion progressively reduced lands formed in western New England by the Taconian orogeny at the beginning of the Silurian. Silurian rocks about 1 mile (1.5 km) thick were laid down in Pennsylvania and thereabout in a basin that subsided as it filled. The earliest Silurian rocks that are found there are conglomerates and sandstones, passing westward into shales. By the end of the period, however, limestones were widespread. Some of the principal mountains in the state consist of quartzite that is solidified early Silurian sandstone. The Atlantic coast has thick sequences accumulated in a region from Maine northwestward that was characterized by sediment-producing islands and volcanoes in the Silurian.

The Clintonian Stage is the source of iron ore in New York and the Appalachian Mountains south to the Alabama. Lockportian limestone representing Silurian coral reefs is found in a broad belt from Illinois to Ontario and New York and is quarried in Chicago and extensively in western Ohio. The reefs had separated deeper water receiving muds from eastern lands from clear water of poor circulation to the northwest. The same coralline limestone forms the falls at Niagara, the high escarpment of central Ontario, the peninsula between Lake Huron and Georgian Bay and the islands north of the lake, and the points separating Green Bay from Lake Michigan. The Mississippi River passes below Silurian bluffs in northwestern Illinois. Similar rocks are found south of Hudson Bay, in Manitoba, and in areas in arctic Canada, since in the Silurian Period world climates were not so rigorous as at the present time.

In the Late Silurian, or Cayugan, in northwestern New York, salts evaporated in lagoons having restricted access to open seas. The resulting salt and gypsum is the source for chemical industries about Syracuse. At the same time, southern Michigan sank nearly 1 mile (1.6 km) as limestone and salts accumulated in a basinlike depression there. Brine pumped from these beds in Michigan and Ontario is used in making ordinary table salt.

In western North America, Silurian rocks were never deposited in a large area centered in Colorado, Wyoming, and Montana. However, rocks of this period appear and thicken rapidly to a mile or so in the cordilleran geosyncline in western Utah and Nevada, in the same belt that subsided deeply in the preceding periods. The Silurian is the oldest system from which fossils have been identified in the Sierra Nevada of California. In southeastern Alaska, 2 miles ( 3 km ) or more of graptolite-bearing shales and lavas succeeded by limestones indicate the continuing presence of volcanism in a géosynclinal belt along the Pacific coast.