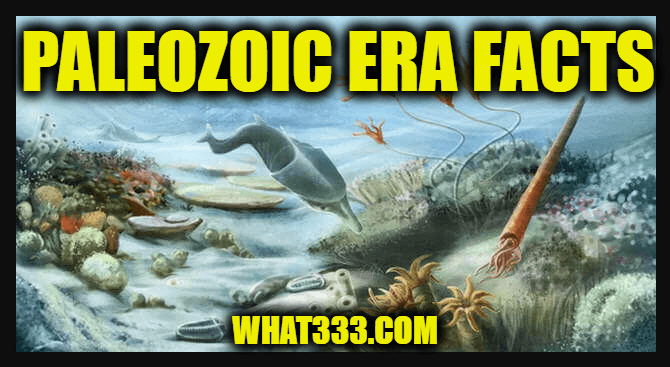 Paleozoic Era; The word “Palaeozoic” comes from two Greek words meaning “ancient” and “life”. It was chosen as the name for this era because the rocks formed at this time are the first in which easily identified fossils appear.

The Palaeozoic Era lasted at least 300,000,000 years and is divided into six separate periods. Apart from one, each period is named after the place in which its own particular type of rock was first found. The periods, in the order in which they happened, are :

At the beginning of the Cambrian Period there was in some places a spreading of the seas across the land areas. The lowest (oldest) Cambrian rocks in such places started as coarse beach shingle that later hardened into a pebbly rock called a conglomerate. On top of this are finer sandstones, clay rocks and shales.

In these rocks a great number of fossils of trilobites and some shellfish, corals and sponges are to be found.

The sea was still spread widely over western Britain, but in several areas volcanoes became active and lava flowed along the sea floor. Sometimes the lava piled up and volcanic islands, such as are now found in the East Indies and West Indies, were formed. Sedimentary rocks also were laid down; that is, over a long period of time rocks were built up from soil and rock sediment dropped by water and wind. Most of them were shale, a clayey type of rock.

Fossils are of much the same type as those of the Cambrian rocks, and there were great numbers of graptolites (also extinct animals).

The Welsh seas now began to be filled up with material washed down from the land by the rivers. Limestone rocks were laid down. (In the article Limestone it is explained that these consist mostly of the shells and skeletons of snails, oysters and other similar animals.) Coral was built up in limestone reefs by tiny animals known as polyps. From these reefs—now far from the sea—at Much Wenlock in Shropshire and at the Wren’s Nest near Birmingham (England), beautiful specimens of coral, sea lilies, shellfısh and trilobites can be obtained.

During late Ordovician, Silurian and Devonian times came great movements of the earth’s crust which pushed up chains of high mountains. These are known as Caledonian movements and the great new Caledonian mountains appeared, beginning in south Wales, going through the Lake District and across northern Scotland and into Scandinavia. The enormous pressure that pushed flat land into high moun. tains also pressed clay into slate. Thus were formed the Welsh slate beds from which slate is taken for the roofs of houses. In Scotland, masses of liquid rock were forced up from below, and the pressure changed it into the granite, of which the pink granite of Aberdeen is the most famous.

The movements of the previous period produced a great change in the appearance of the British Isles. A shallow sea covered England south of the Rivers Severn and Thames. To the north was a land mass built up of the new mountain ranges, which were much higher in Scotland than in Wales. The flat lands between the mountain ranges began to be steadily filled up with material worn off the mountains, and this material is now called Old Red Sandstone. In the middle of Scotland there were great volcanoes which poured out lava. (Edinburgh Castle stands on the stump of one of them.)

Most important of all, it was at this time that fish first appeared in the lakes and rivers of this part of the world. Land plants developed at about the same time. At first they grew only in or near water, but soon more tree-like kinds appeared and spread up the mountainsides.

The northern land mass had been largely worn away by this time, and once more the seas were able to spread from the south into Scotland. In the clear shallow waters great thicknesses of limestone were laid down, and there were great hot swamps in which tree-ferns, giant mosses and horsetails grew. As the plants died they fell into the water and were covered by later generations of plants.

Time after time this happened, and great thick beds of dead and rotting plants were built up. The weight of the upper layers pressing upon the lower ones, and of sediment pressing upon all, caused the mass to become more solid. Finally, as some of the water was squeezed out, lignite (brown coal showing traces of its plant origin) was formed, and at last coal itself. Thus, the coal burnt today is made from plants that grew many millions of years ago.

Small and large amphibians lumbered and paddled through the swamps. They laid their eggs in the shallow waters, and their young were little tadpoles, swimming about like fishes, developing legs as they grew older.

At the end of this period came another time of pressure when mountains were pushed up. The movements that happened at this time are known as the Armorican Movements, after Armorica, the Latin name for Brittany, in France. Southern England and Wales were most severely affected and the slates and granites of Cornwall date from this time.

While hot, wet forests were flourishing in Europe and in North America, great ice sheets covered much of the southern hemisphere. We know that this happened because it is still possible in the rocks of this period in South Africa, Australia, New Zealand and South America to see the boulders left by glaciers resting on scratched rocks or dropped by floating ice to the sea bottom.

These ice sheets at last melted and dry plains took their place. On these the great reptiles first appeared. They did not need to live partly in water, like the amphibians, and soon after them the first, very primitive mammals appeared.