Ulrich Zwingli; first Protestant reformer of Switzerland: b. Wildhaus, St. Gallen Canton, Switzerland, Jan. 1, 1484; d. Kappel am Albis, Ziirich Canton, Oct. 11, 1531. The third of eight sons of a comparatively well-to-do bailiff, he was designated by his father at an early age for a career in the church. He studied in Basel, Bern, and Vienna and completed his training in the arts and in theology at Basel (1502—1506), where he obtained the degree of M.A. He was a persuaded humanist when in 1506 he was called upon to serve as parish priest of Glarus. There Zwingli turned to Biblical studies, reading the New Testament in Greek, and gradually came to regard himself as an Erasmian. He also began to think that the church should be reformed by a restoration of its original order. Yet he was a faithful churchman, loyal to the pope. As such he served as chaplain to the young men of Glarus who had engaged as mercenaries for the pope in defense of northern Italy against the French, and was present at the victory of Novara in 1513 and the defeat of Marignano in 1515.

In 1516 Zwingli became preacher in the convent of Einsiedeln, then as now a celebrated place of pilgrimage, and began to give public expression to his ideas of reform of the church upon those points in which he believed it had departed from the primitive teaching. He gained considerable fame as a pulpit orator, so that in 1518 the chapter of the Grossmünster (cathedral) of Zürich invited him to become the people’s priest (preacher) there. He assumed his new duties in January 1519 and delivered a series of sermons in which he expounded seriatim entire books of the New Testament, beginning with the Gospel according to Matthew, hoping to instill in his hearers the desire for a reform of the church and the common life according to the pattern of the New Testament. A little later, he began to object to the efforts of foreign agents to secure popular support for the recruitment of Switzerland’s young men as mercenaries, and did not hesitate to inveigh against papal policies in this connection. In December 1518 he came under the influence of Martin Luther’s early writings and the next year became a partisan of Luther’s cause, both in respect to the new understanding of the Gospel in terms of trusting faith in the divine promise of forgiveness and in respect to the criticism of the papacy as an enemy of Christ. 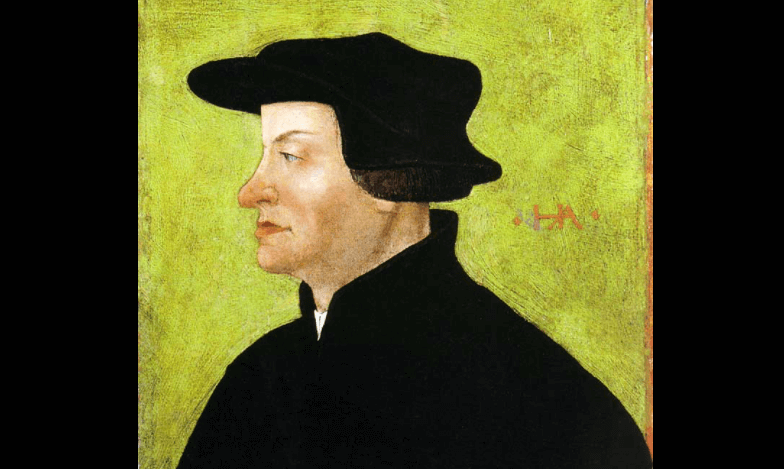 Under Zwingli’s leadership, Zürich gradually became a second center of the Reformation, next to Wittenberg. This was possible only because Zwingli had secured the government’s support for his enterprise. In 1520 the Zürich Council published a decree ordering that the Holy Scriptures should be taught “without human additions.” In 1522 Zwingli began to abolish Roman Catholic ceremonies and wrote a treatise against fasting.

The government issued a call for a “disputation,” a public discussion by theologians and churchmen, to test the truth of Zwingli’s teachings. Zwingli prepared 67 Schlussreden, or proofs, in which he set forth his program for the reform of the church. On Jan. 29, 1523, the disputation took place, with Johannes Faber, vicar-general of the bishop’of Constance, as the most prominent Ro-marf Catholic representative. Faber refused to discuss any of Zwingli’s propositions except the last, which denied the supreme authority of the hierarchy of the church. The Council decreed that Zwingli had not been convicted of error. On Oct. 26-28, 1523, a second disputation was held, as a consequence of which the Roman Catholic order in Ziirich was gradually abolished. The monasteries were closed; ecclesiastical funds and properties were assigned to educational purposes and poor relief; and jurisdiction over marriage and divorce was assigned to a special court. By Easter 1525 the Mass and all other Roman Catholic sacraments and ceremonies were abolished and replaced by a preaching service and the simple observance of the sacraments of Baptism and the Lord’s Supper according to the pattern of the New Testament.

Zwingli interpreted the Lord’s Supper as a memorial feast, by the observance of which Christian believers, assembled as a local congregation, affirm their faith in Christ and renew their fealty to him. He denied the real presence of Christ in the bread and wine of the Eucharist and rejected the doctrine of transubstantiation. He affirmed a spiritual presence of Christ in terms of the sixth chapter of the Gospel of John. Zwingli set forth the theological reasons for all these innovations in his main theological work, characteristically entitled Commentarius de vera et falsa religione (1525; Commentary on True and False Religion). His doctrine was marked by a distinctive emphasis on the sovereignty of God, in connection with which he tended to view the Bible as the “Word of God” in a legalistic way. Moreover, he taught the doctrine of predestination as the basis and source of salvation, and he interpreted all forms of life as manifestations of God’s providence.

Zwingli encountered opposition from several cjuarters—from the Anabaptists, the Lutherans, and the Roman Catholics. The Anabaptists, who came publicly to the fore in Zürich for the first time late in January 1525, were originally followers of Zwingli, but they felt it necessary to part company with him because of his advocacy of a theocratic church order; they regarded his alliance with the political authorities of Zürich as irreconcilable with Christian teachings. Another controversy in which he became involved was due to the fact that his conception of the Lord’s Supper called forth vehement opposition on the part of Luther, who, though rejecting transubstantiation, ardently believed in the real presence of Christ in the elements of the Lord’s Supper. In the interest of forming a united evangelical front against the Roman Church and her political defenders, especially the Habsburgs, a colloquy was arranged at Marburg on Oct. 1-3, 1529, under the auspices of Philip, landgrave of Hesse. Luther, Zwingli, and the other Protestant theologians present readily agreed on the main Christian doctrines but found it impossible to achieve a common mind on the Lord’s Supper.

The third major conflict in which Zwingli was involved was with the Roman Church and especially with its defenders in Switzerland. The five oldest cantons of the Swiss Federation, the so-called Forest (rural) Cantons, adhered strictly to Roman Catholicism and objected to the spread of the Reformation in the urban cantons. Under the leadership of Zwingli, Zürich imposed political and economic sanctions on the old cantons, and in the fall of 1531 they made a surprise attack on the city. Zwingli went to battle as a chaplain with the Zürich soldiers and was struck down in the fighting at Kappel. His cause was taken up by his followers, and his work was carried on by his successor, Heinrich Bullinger