What are the properties of diamond? Occurrence of diamond, information on diamond properties.

The most distinctive characteristic of diamond is its hardness, which serves as the highest point—number 10—on Mohs’ scale of hardness used in mineralogy. This means that diamond is able to scratch or abrade every other mineral. In fact, a greater difference exists in this respect between diamond and corundum (number 9 on Mohs’ scale) than between corundum and talc (number 1). Other scales of hardness used in science and industry likewise show the superiority of diamond. Its hardness makes it valuable as an industrial tool and also enables it to withstand wear as a gem. The diamond crystal, however, is not equally hard in all directions. In practice, the crystals are set singly for use in cutting tools. In this way they can be oriented correctly to within one degree, by X-rays and gamma radiation, with respect to the crystal direction of greatest hardness.

Diamond crystallizes in the isometric system. The crystals, which range from white or colorless to brown or black, are most often octahedrons that resemble two square-based pyramids placed base to base. The next most common form is the dodecahedron, which has 12 faces. Cubes are less abundant. As is true of most natural crystals, these forms often occur rounded, flattened, or otherwise distorted. Twin crystals are found frequently, especially the so-called spinel twin of double octahedrons.

Both the crystal shape and the hardness of diamond reflect the 3-dimensional pattern in which the carbon atoms are arranged within the crystal. An atom of another element may take the place of a carbon atom in this crystal lattice structure, but there is seldom more than one such atom for every 10,000 carbon atoms; and the finest natural diamonds contain only one foreign part for about 100,000 carbon atoms. 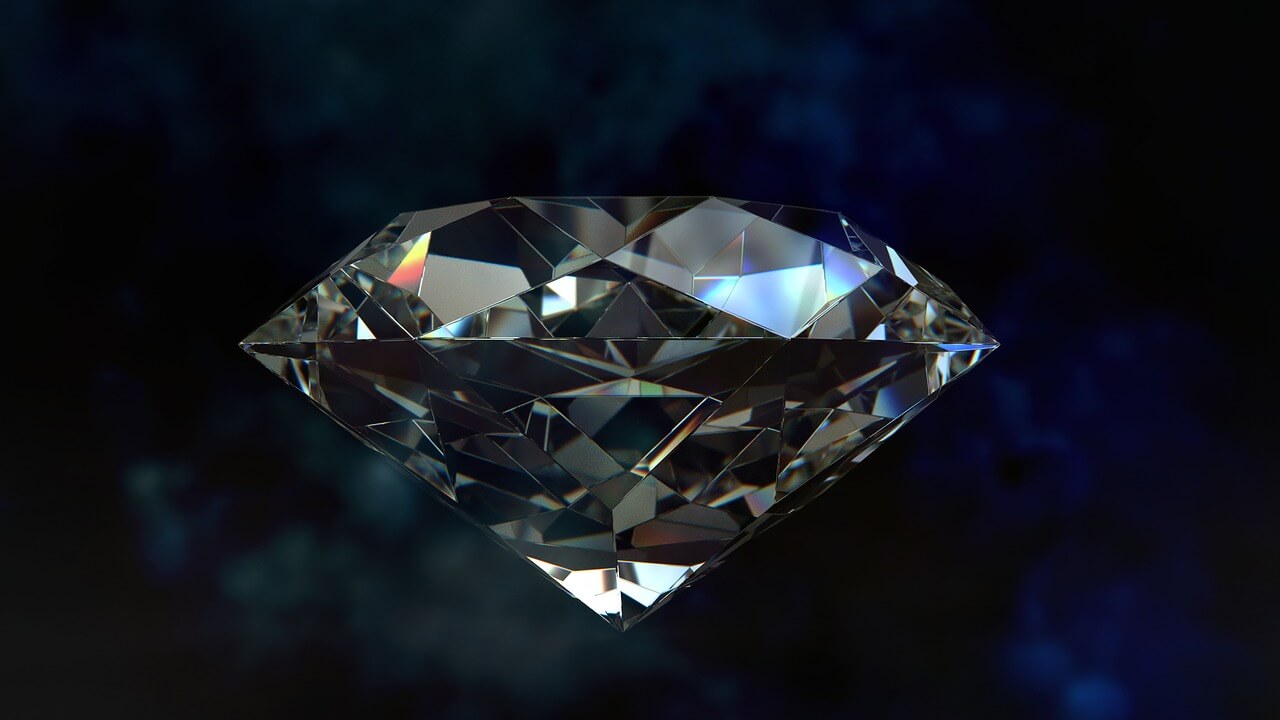 The atomic structure in turn influences the way that diamond breaks. Despite ancient legends to the contrary, diamond has a perfect cleavage parallel to the octahedron faces of the diamond—that is, there are four directions of cleavage. This property is used to divide large crystals and spinel twins, and to shape the finished gem.

Owing to the relatively close packing of the carbon atoms in the crystal lattice, diamond has a fairly high density; its specific gravity is 3.52. Hardness and heaviness combine to make diamond an ideal placer mineral—that is, one separable from other surface deposits by processes such as washing.

The optical properties of diamond give it the beauty that makes it desirable as a gem. First is its luster, which is termed adamantine (from the ancient name for diamond); the crystal has a very bright, slightly oily surface reflection. Diamond has a high refractive index of 2.417 as well, which means that a properly cut stone can return to the eye of the beholder a large proportion of the light that enters the stone. Its light dispersion—the breaking up of white light into its component colors—also is high; this is called fire.

Diamonds are classified as type I or type II according to the way they absorb radiation in the visible as well as the infrared and ultraviolet regions of the spectrum. (A few intermediate specimens are of different types in different regions of the spectrum.) Type II, the only kind that occurs blue in nature, seems to be a more nearly perfect kind of crystal lattice that has fewer crystal defects than type I.

Color, or the absence of color, is another and a most important optical property of gem diamond, strongly affecting its commercial value.

Most diamonds are extremely good electrical insulators. Some crystals of type II are semiconductors, however. The heat conductivity of gem-quality diamonds at room temperature, on the other hand, is greater than that of any other known substance. For this reason, diamond can be cut at high speeds without being damaged by the heat generated.

In only one rock, kimberlite (named for the diamond-mining city of Kimberley, South Africa), does diamond occur originally. All other occurrences are secondary. That is, diamond found in other rocks was eroded from a primary source (presumably kimberlite) and incorporated in some kind of sedimentary rock, which then may have been more or less changed by metamorphism.

Kimberlite does not always contain diamond. Even when it does, the proportion averages only about 1 part in 40 million parts of rock and probably never has exceeded 1 part in 8 million parts. Diamond thus is a so-called accessory mineral and would be of little interest except for its economic significance. 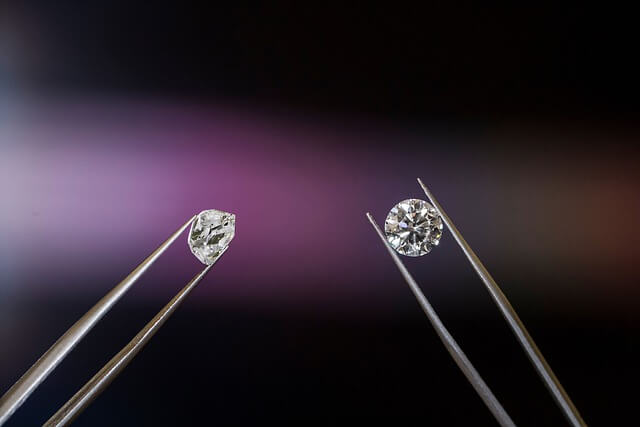 Kimberlite is an altered and brecciated (broken) form of peridotite. Peridotite, in turn, is a heavy, high-temperature igneous rock of basic composition (high iron and magnesium content). The form known as kimberlite consists of large corroded crystals of high-pressure minerals, including diamond, in a matrix of calcite and a distinctive group of basic minerals, most of which are green. Kimberlite usually contains inclusions of dense rocks of various kinds, some brought up from considerable depths and others dragged down from above.

Kimberlite occurs typically in diatremes, or pipes. These somewhat cylindrical bodies of rock are of volcanic origin, although their connection with actual surface volcanoes is uncertain. Any evidence of such association has been eroded away. The explosive origins of kimberlite pipes is shown, nevertheless, by the abundant indications of shattering upward movement and downward or inward collapse in the pipes. At greater depths the pipes become narrow and take on the shapes of dikes.

As kimberlite weathers and its iron oxidizes, the color of the rock changes from bluish green (when it is called blue ground) to yellowish (yellow ground). The weathering of kimberlite frees the diamonds it contains. They are carried away by streams and other agents of erosion and finally come to rest in placer deposits. Later stages of erosion may move the diamonds again. They are recovered from stream gravels, from windblown deposits (dunes), and from beach deposits, and offshore mining of submarine beds is conducted along the Atlantic Ocean coast of Africa. Conglomerate, sandstone, and other sedimentary rocks yield diamond in various parts of the world. An especially interesting host rock is the flexible sandstone called ita-columite. Schist and related metamorphic rocks also contain diamonds.

The minerals found with diamond depend on where it occurs. In kimberlite the associations are so typical that the prospector can depend on them. Olivine, garnet, phlogopite, mica, pyroxene, ilmenite, serpentine, chlorite, and calcite are the usual minerals. In placer and other secondary deposits, however, the accompanying minerals are not necessarily related to a kimberlite origin; they may be minerals characteristic of placers—such as magnetite and gold—as well as locally derived minerals.

The first great source of diamond was India, although production there today is very small. The prominent Golconda mines used a name that concealed the mines’true locations, for Golconda (now a deserted fort near Hyderabad) was merely the trading center. The mining was done over a wide area on the eastern side of the Deccan plateau and extended into the Bundelkhand district, where present operations take place. Mining practically ceased in the 17th century, not long after all the historic stones except the Koh-i-noor were found. One ancient kimberlite mine has again been worked in central India, but the rest are in secondary deposits.

In 1727, not long after production declined in India, diamonds were found in Brazil. In spite of political interference and poor trade practices, Brazil maintained a leading position in diamond production for a century and a half. Three states—Minas Gerais (the mining center is Diamantina), Bahia, and Mato Grosso—are the most important producers, but six others have yielded some diamonds. The average grade of the stones is very high, and a few large crystals have been found.

Guyana has diamond beds across its entire width, but until recently they were not sufficiently accessible; today exports are substantial. Venezuela has become another large exporter. 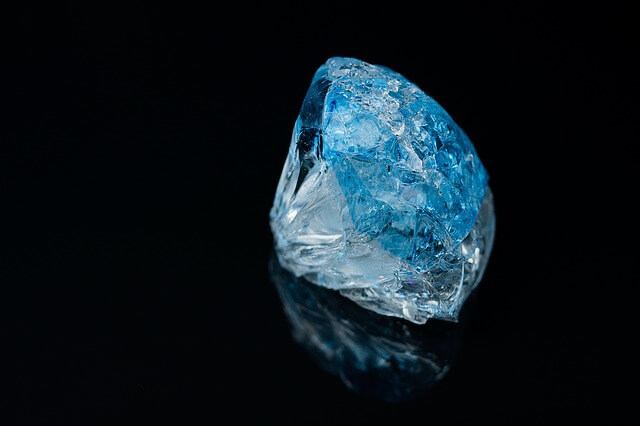 The first recognized diamond in South Africa was picked up by children of a Boer farmer in 1867. It weighed 22 carats. A second large crystal was found in 1869 by a shepherd boy. A diamond rush began the next year and spread across South Africa, changing its character as wealth from diamonds opened up the gold-mining industry. Certain mines have become famous, such as the Kimberley, Dutoitspan, Bultfontein, Premier, Wesselton, Jagers-fontein, and De Beers mines. In most mining history the mother lode has been sought long after the working of placer deposits began, but in Africa the secondary alluvial diamond deposits became important only after the working of kimberlite pipes.

Southwest Africa began to produce diamonds in 1908. Operations expaned in surges; now they extend offshore and involve the use of barges that suck up debris from the sea floor. On land, the beach deposits yield one part diamond to 100 million parts sand.

Nearly all the new nations of southern Africa and even nations and territories farther north have some deposits of diamonds, especially Sierra Leone, Ghana, Guinea, Angola, Liberia, Ivory Coast, and the Central African Republic. The Congo region has been a heavy producer of industrial diamonds since 1910. The largest kimberlite pipe yet known, the Williamson, is in Tanzania (another large producer of diamonds).

A kimberlite pipe in Pike county, Ark., has yielded 40,000 diamonds weighing up to 40 carats each. Discovered in 1906, it had been operated by a succession of owners, none of whom made it profitable until it was turned into a tourist attraction where visitors may explore for a fee. Many dozens of crystals have been picked up in the Great Lakes states, where they evidently were transported from Canada by the glaciers of the Pleistocene ice age. More puzzling are the crystals found in California, in regions of the Appalachian Mountains that never experienced glaciation, and in a few other areas, because their original sources are completely unknown. Kimberlite, nevertheless, has been noted in various sites in the United States and Canada.

Borneo and Indonesia furnish some diamonds and have done so for centuries. Most of them are small but of good quality. New South Wales and—to a lesser extent— other states in Australia have yielded diamonds. Details about diamond deposits in the Soviet Union are lacking. They are of major rank, however, and include both gem and industrial stones. The largest locations are in kimberlite deposits in Siberia, which were discovered after 1954.