ARCADIA, is a pastoral romance by Sir Philip Sidney. Its full title is The Coun-tesse of Pembroke’s Arcadia. It is the longest and most famous work of prose fiction composed in English in the 16th century. It was completed in its earlier form about 1581, but a greatly revised and expanded version was left unfinished at the author’s death in 1586. This incomplete recension was published in 1590. 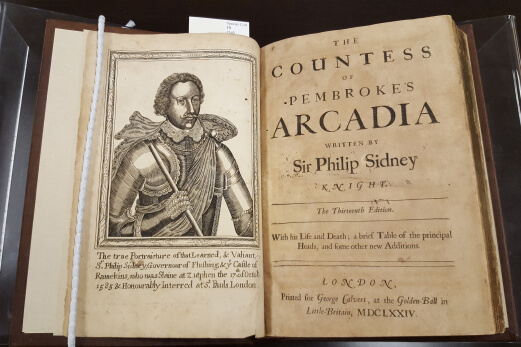 In 1593, Sidney’s sister, Mary, countess of Pembroke, produced an enlarged edition in which the concluding sections of the original version were added to the unfinished second draft. In this composite form the work was circulated until 1926, when the complete text of the earlier version was at last printed from surviving manuscript copies.

As originally conceived, Arcadia was a pastoral love story modeled in part on its Italian namesake (1504) by Jacopo Sannazzaro. In this form the tale was in five books, or acts, separated by “eclogues” in prose and verse. It related the adventures of two princes, Musidorus and Pyrocles, and their loves for the princesses Pamela and Philoclea. It had, Sidney reminded his sister, been written hastily “in loose sheets of paper, most of it in your presence [at Wilton House, her country home], the rest by sheets sent unto you as fast as they were done.”

In his unfinished revision, Sidney undertook to give the narrative more of an epic than a pastoral cast. The time sequence was altered to permit a conventional epic opening in medias res; warfare, captivities and rescues, and chivalrous deeds demoted the earlier love stories to relatively minor status. The first version was akin to Sannazzaro and to the Greek romances of Heliodorus and Achilles Tatius; the second was closer to Amadis of Gaul and Morte Darthur.

Arcadia continued to be widely popular throughout the 17th century: 14 editions appeared between 1590 and 1674; from it Beaumont and Fletcher borrowed the plot of Cupid’s Revenge, and Shakespeare the story of Kent in King Lear. The most famous plagiarism, first detected by John Milton, was in the Eikon Basilike, where a prayer uttered by Pamela in book 3 of Arcadia was alleged to have been composed by King Charles I on the eve of his execution. Today the book is definitely a period piece, seldom read in its entirety except by special students of Elizabethan literature, who rightly regard it as a notable monument of English prose style. But it may be doubted if many, even of these specialists, could from memory give a coherent outline of the plot. The most enduring element of Arcadia is in the verses interspersed among the prose. These include many of Sidney’s finest sonnets and lyrics.