Anthozoa; is the scientific name for the large class of invertebrate animals that includes sea anemones, sea fans, and corals. Anthozoans, sometimes called actinozoans, inhabit salt waters throughout the world. Although some species are found in cold polar seas, most anthozoans inhabit warm temperate or tropical regions, living in shallow waters as well as at great depths.

Anthozoans vary greatly in appearance. Many species are various shades of red, pink, and purple, while others may be blue, yellow, white, or orange. In size, they range from tiny solitary individuals measuring less than half an inch (12.7 mm) long to large colonial sea pens that may grow to a length of more than 2 feet (60 cm). Many anthozoans, such as sea anemones, live singly, while others, including most of the corals, live in colonies.

The basic anthozoan body plan is a modified cylinder. In some, such as sea anemones, the body is stout and muscular, but in others, such as sea pansies, sea fans, and corals, the body is thin and only slightly muscular. Most anthozoans secrete some nonliving substance around the outside of the body. This substance, which may be calcium carbonate or a much softer material, serves to support and protect the soft body tissues.

At the basal end of the body is a smooth, sometimes slimy disc, called the basal disc. Some anthozoans, such as the sea anemone, use this disc for slowly sliding about during periods of migration. Other anthozoans are sessile, or attached, and use this disc for adhering to the ocean floor or to a rock or other object.

At its upper end the anthozoan’s body is expanded to form a flattened disc, called the oral disc, which contains a central mouth opening surrounded by one or more rows of hollow tentacles. These tentacles are armed with special stinging cells, called nematocysts, which are used for paralyzing enemies and prey. Once paralyzed by the nematocysts, the victim is passed by the tentacles into the mouth opening. 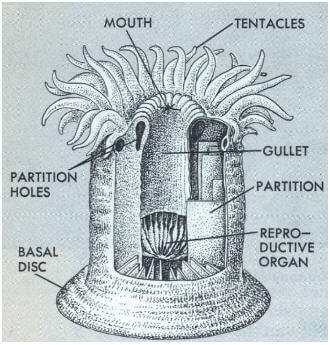 Below the gullet they form one large chamber, but above the point where they attach to the gullet, they connect with each other through one or more small holes in the mesenteries.

Located at the free ends of the mesenteries are special gland cells that secrete digestive fluids. In addition, the mesenteries contain many cells that are specialized for digesting food particles. These cells are also scattered throughout the inner wall of the body cavity, but it is the presence of these cells on the mesenteries that allows anthozoans to digest larger organisms than would otherwise be possible. Some sea anemones have been known to digest extremely large fish.

In many anthozoans, the stomodaeum is lined with many whiplike projections, called flagella, which lash back and forth creating water currents in the body cavity. These water currents help bring food particles and oxygen to the body cells, while also removing their wastes.

Anthozoans do not possess a well-developed nervous system. Their nerve tissue usually consists of a network of ganglionic nerve cells connected by large nerve fibers. 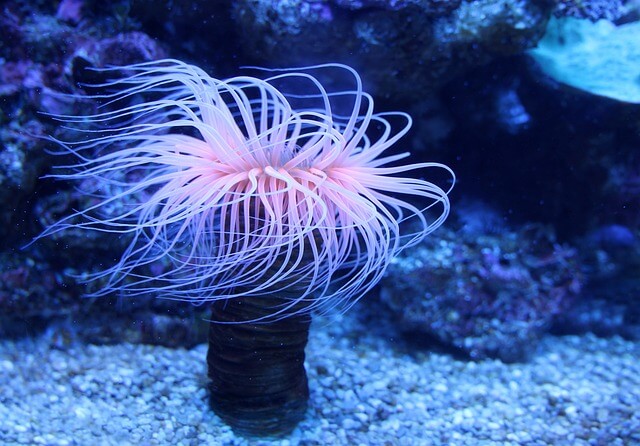 In sexual reproduction, the sex cells may be expelled through the mouth opening to the outside, where fertilization occurs. After passing through several early stages of embryonic development, the new individual usually settles to the bottom. However, in some anthozoans the new individual becomes a free-swimming larva, called a planula, which swims about for a while before settling.

In addition to reproducing sexually, anthozoans reproduce asexually, either by splitting in half or by budding. In ‘splitting, the anthozoan simply forms two separate individuals. In budding, a new individual forms as a small bud extending from the body wall. After a period of growth, the bud may either break off from the parent or remain attached to it. In many corals the process of budding is responsible for the formation of colonies, some of which form gigantic coral reefs.

Anthozoans first appeared during the middle of the Ordovician period, about 400 million years ago. In their evolutionary development they represent an advance over one-celled organisms and the sponges by having distinct body tissues and a division of labor among the different cell types.

Because of their abundance during past geologic times, the reef-building anthozoans have been valuable to scientists in learning about the past climates of certain regions. Since most of these anthozoans live in shallow, well-lighted marine waters where the temperature ranges between 77° F and 84° F (25° C to 29° C), it is inferred that ancient reef-building corals lived in similar habitats. Therefore, when ancient coral reefs are discovered in rock formations of inland areas, scientists may assume that those particular areas were once covered by bodies of clear, warm, shallow marine water. 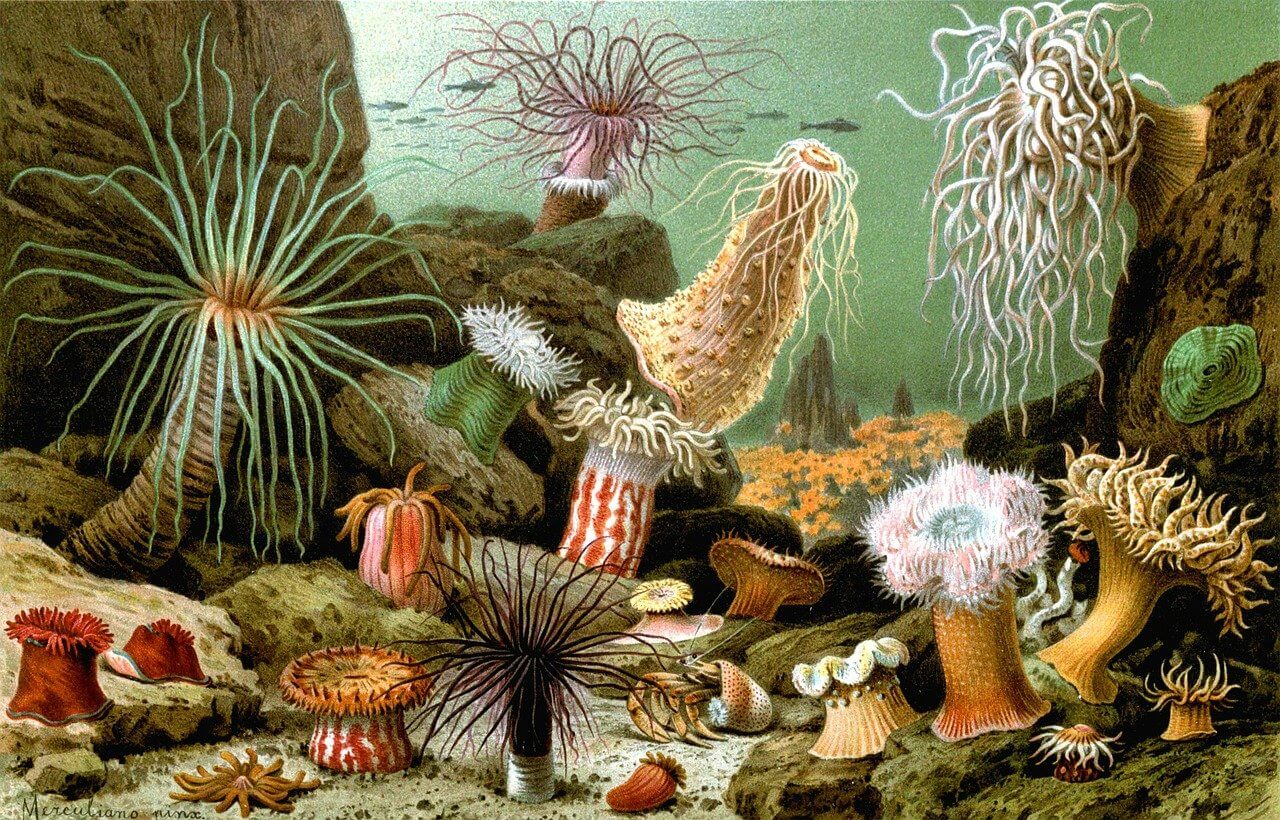 There are 15 orders of anthozoans. Eleven of the 15 are represented by living members. The remaining four orders are known only through their fossil remains.