What is switf bird? Information on swift bird features, facts, description. What are the true and crested swifts? 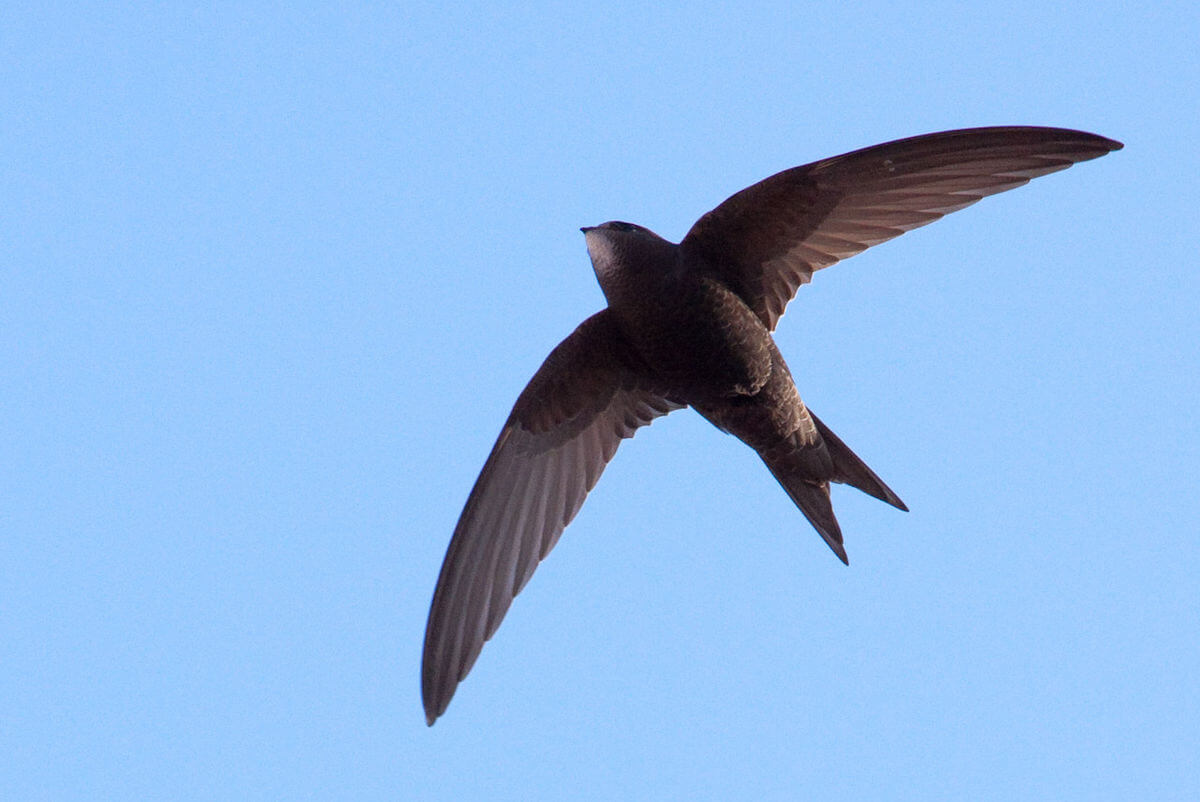 Swift; the common name for any of 68 species of rapidly flying, insectivorous birds found throughout the entire world, except the polar regions, New Zealand, most of Australia, and some isolated oceanic islands. Most swifts live in the tropics or subtropics, but some species inhabit mountains up to the snowline, and others spend the breeding season in the temperate zones, migrating to the tropics in winter.

Although they superficially resemble swallows in form and flight, swifts are more closely related to hummingbirds and are classified with them in the order Apodiformes. There are two families of swifts—the Apodidae, or true swifts, and the Hemiprocnidae, or crested swifts.

Swifts vary in size from the 3% inch (9 cm) cave swiftlet (Collocalia) of the East Indies to the giant collared swift (Strep-toprocne) of South America with its 18-inch (45 cm) wingspan. Swifts have powerfully built, streamlined bodies; flattened heads with small, short, slightly hooked beaks; and enormous mouths that extend laterally to beneath the eyes. The legs are very short but possess powerful clinging toes. In color, the swifts are mostly dull brown or gray-black, although a few species display white or gray patches or, rarely, other hues. In the true swifts, the sexes are alike in coloring.

Swifts are the most aerial of all birds, and their wings show corresponding adaptations. Externally, the wings are large, narrow, long, and with little curvature. The specialized structure of the wings coupled with powerful breast muscles make possible rapid, sustained, highly maneuverable flight. Swifts have been credited with air speeds of over 100 miles (160 km) per hour.

There are 65 species of true swifts. Most (subfamily Chaeturinae) have spiny-tipped tail feathers that serve as props when the birds cling to vertical surfaces. Included in this group is the common chimney swift (Chaetura pelagica) of eastern North America. Other true swifts (subfamily Apodinae) lack the spiny tail feathers but have all four toes directed forward to make an effective wall-gripping mechanism. This group includes the common swift (Apus apus) of Europe.

True swifts not only feed on the wing, but also collect nesting materials and mate while airborne. They cling to walls, trees, chimneys, and other vertical surfaces and often spend the night in flight. True swifts never alight on the ground, and in fact, if placed on the ground, they can take flight only with difficulty.

True swifts are strict insectivores. They eat voraciously to meet their high energy requirements for nearly continuous flight. Since insects on the wing can be caught only in fine, warm weather, flocks of true swifts may travel hundreds of miles to avoid a meteorological low with its adverse stormy weather. When nestling swifts, still unable to fly, are threatened witli starvation by inclement weather, their body temperatures drop more than 50° F (28° C), and they become torpid. With their metabolism thus reduced, they can survive up to 10 days without food.

The nests of true swifts may be built with twigs, plant fibers, seeds, moss, lichens, or feathers, but in all cases, the materials are cemented together with the bird’s mucilaginous saliva. The nests may be glued to the vertical walls of caves, cliff crevices, chimneys, hollow trees, belfries, palm fronds, and even cliffs behind waterfalls. The eggs are oblong or cylindrical in shape and invariably white. There may be only one or, rarely, as many as six in a clutch. Both parents share the unusually long incubation period, lasting from 16 to 20 days, depending on the weather. The young require five to eight weeks to fledge.

One group of true swifts—the cave swiftlets (Collocalia) of southeast Asia—construct their nests entirely of salivary mucus. These nests were once highly prized for making bird’s-nest soup. Millions of cave swiftlets nest deep in caves and find their way by means of echolocation.

There are three species of crested, or tree, swifts, making up the genus Hemiprocne. They are found along the edges of tropical forests in India, Malaya, and the East Indies. Crested swifts are colorful birds with erectile crests on the forehead and blackish facial masks. They also have deeply forked tails. The sexes are different in plumage, with the male more elaborately dressed. A single crested swift makes a cuplike nest by gluing strips of bark to the side of a tree limb. The one grayish-white egg is cemented to the bottom of the nest.