What is moss? What are the types of mosses? Where do mosses grow? Information on mosses. 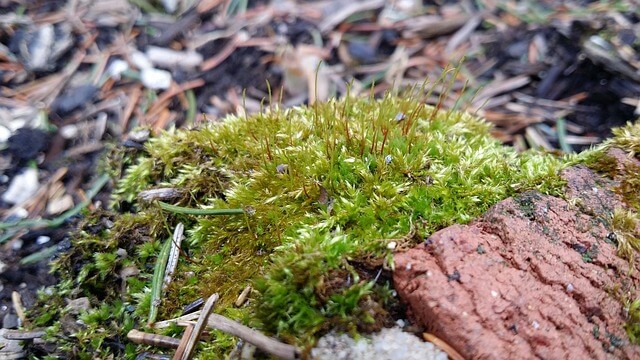 Mosses; a class, Musci, together with the liverworts, Hepaticae, constituting the Bryophyta, one of the five large groups of land plants. Mosses are worldwide in distribution, and in general inhabit the less favorable areas of this earth. Thus Andreaea grows on exposed roeks from the Arctic to the Antarctic, and in the tropics on high mountains. Other common rock-inhabiting forms are species of Ulota, Orthotrichum, Grimmia, and Hedwigia. These, with the lichens, initiate succession on stones, and so prepare the way for other plants.

İn contrast are those mosses which live in the water of running streams, such as Hygrohypnum dilatatum, Eurhynchium rusciforme, and especially the conspicuous water mosses in the genus Fontinalis. The bog moss, Sphagnum, is the pioneer in acid-bog succession, although it is often associated with other genera such as Hypnum. Stili others flourish in swamps, like Dichelyma and the tree moss Climacium, which is suggestive of ground pine or a cedar tree in miniature. Many mosses, such as species of Mnium, form soft green carpets along the shaded banks of streams.

Among the most attractive temperate-zone ferns are the mountain fern moss, Hylocomium splendens, which spreads like a mat on roeks and decaying logs in mountain areas and ravines ; the common fern moss, Thuidium delicatulum, of rich woodlands, its finely branched stems suggestive of delicate fern leaves; and the plume moss, Ptilium crista-castrensis, of which the branehes, covered with minute, yellowish-green leaves, form feathery tufts in the cool, moist mountains of Europe, Asia, and North America. Wrapped around the bases of tree trunks the common thelia, Thelia hirtella, is often seen. Some species of the conspicuous hair-cap moss, Polytrichum, grow in damp places, such as P. commune, which may be over a foot high; others, like P. piliferum, prefer sandy habitats. Both of these occur across the Northern Hemisphere, and they are abundant in the Southern as well. Nestled in the cracks of city streets the gray-green plants of the cosmopolitan silvery bryum, Bryum argenteum, may occasionally be found. Some mosses characteristically form cushions or tufts, such as the white or pincushion moss, Leucobryum glaucum, the widespread broom moss, Dicranum scoparium, and its smaller relative, Dicranella heteromalla; both of the latter have the leaves facing in one direction, as if brushed.

Nanomitrium, with stems about one-tenth of a millimeter in height, and Ephemerum, about one millimeter high, grow on moist soil, clay and mud, and are among the smallest mosses. The twisted-stalk or cord moss, Funaria hygrometrica, and Ceratodon purpureus, both of wide distribution, grow on charred wood and bare soil, and then, like birds of passage, disappear when conditions change. Lastly there are Splachnum, found especially on the dung of cows, and the modest luminous moss, Schistostega pennata, which grows in dim caves in Europe and North America, and by focusing the light upon its chloroplasts, glows like emeralds in twilight. For structure and reproduction of mosses.