Deuteronomy; the fifth book of the Pentateuch, the opening books of the Bible traditionally attributed to Moses. Deuteronomy, unlike many other parts of the Pentateuch, is largely given to law, not narrative. The word “Deuteronomy” is an English form of the Greek word “second law” used in the Septuagint version of Deuteronomy 17:18 for the Hebrew “copy of the law.”

Almost all the book is cast in the form of speeches by Moses. The first of these (1:6 to 4:43), generally admitted to consist of secondary additions to the book, tells of the journey from Horeb (Sinai) up to the Promised Land and emphasizes the conquest of Transjordania. The second speech (4:44 to 28:68), the heart of the book, has distinct subdivisions: 4:44 to 11:32 is a fervent exhortation to give oneself to the God of the Covenant with one’s whole heart; 12:1 to 26:15 is the law of this Covenant; 26:16 to 27:26 recounts various covenant-making rites; chapter 28 lists the blessings and curses that depend upon obedience to the Covenant law. Moses’ third speech (29 to 30; also, with 31 to 34, a secondary addition) is a renewed appeal for fidelity. The book ends with a narrative of Moses’ last words and acts.

The style of Deuteronomy, even in its laws, is oratorical, but fresh and vigorous. At one time scholars attributed this to prophetic influence. Now, without rejecting all connection with the prophets, they recognize that much in the style is unique. Its rhetorical tendencies and its concern with cult and interior religion reflect the preaching of the priests and Levites, the ancient custodians of Torah (usually translated “law”). 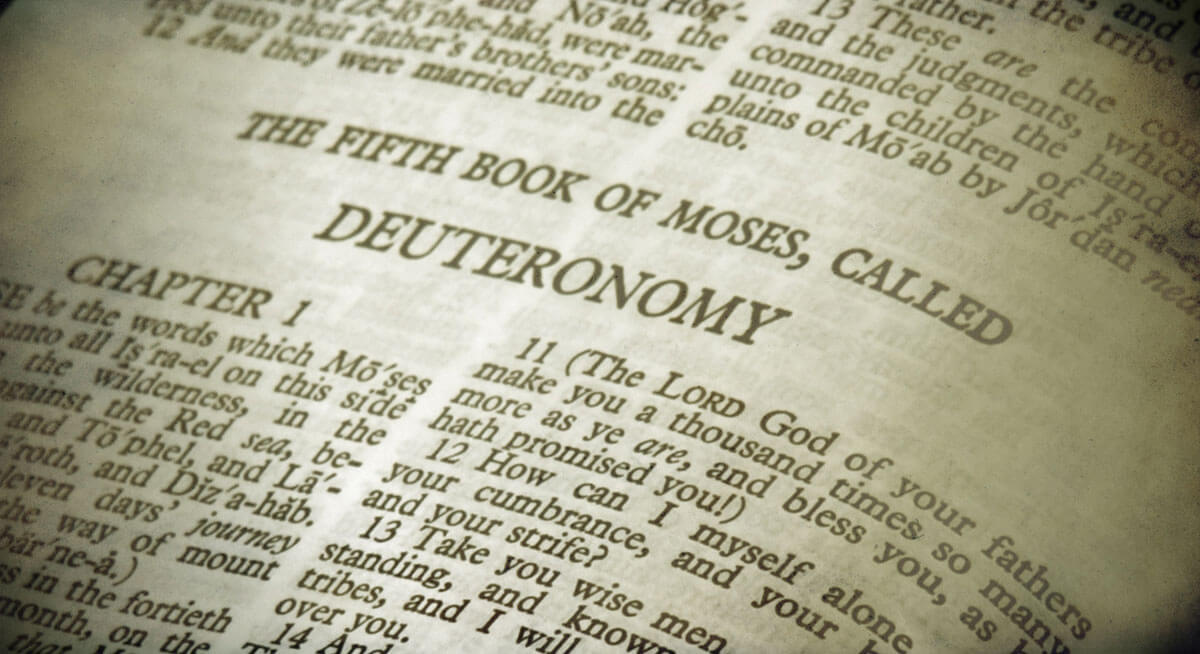 The whole aim of Deuteronomy is to persuade one to a total commitment to the God of Israel, which means a total love of God (6:5). Such a commitment is to be lived out not only according to certain basic general laws, the Ten Commandments (5:6-21), but also according to the elaborate religious legislation, the “Deuteronomic Code,” in chapters 12 to 26. In the context, no legal formalism is implied. It emphasizes total union with Yahweh. One must worship Him only, and in the proper way. Hence there is an emphasis upon ritual. The negative aspect of this total commitment to Yahweh is that Israel must turn away from anything that smacks of heathenism. This aspect is expressed in a manner harsh to modern ears. However, the positive side, social justice and pure love of the sovereign God, more often receives fervent encouragement.

Behind such concerns are the problems of a stratified community settled amid worshipers of other gods, not those of an isolated and classless nomadic group such as Moses would have led. Thus it is unlikely that Moses composed Deuteronomy. But Deuteronomy can be called Mosaic in the sense that all Hebrew law grew out of the basic traditions (for example, the worship of Yahweh alone) that go back to the times in which Moses appears as leader and teacher. The Deuteronomic Code represents this living tradition of law as an adaptable source of guidance in the ever-changing circumstances of life. In fact, Deuteronomy itself represents Moses as giving a new interpretation of law for life in Canaan at the very moment when Israel was changing from nomadic to settled life (29:1), and the Deuteronomic Code shows concrete adaptations of older law to much later conditions.

Modern scholarship agrees on the hypothesis that the Deuteronomic Code (Deuteronomy 12 to 26) is essentially the same as the book of the law found in the temple under King Josiah of Judah in 621 b. c. (II Kings 22). However, scholars have abandoned the old theory of a pious fraud by which the Code was produced at the time to be “discovered,” and so influence the King’s politico-religious policy. Josiah’s aims were clear well before the book was discovered. Even the total centralization of worship in Jerusalem seems not to stem from Deuteronomy, as is usually supposed, but from a policy that sought political unity through religious centralization. Deuteronomy demands worship in shrines devoted to Yahweh alone; but apart from interpolations in chapter 12, this means not a single shrine but proper shrines devoted only to Yahweh, whatever their number.

In many ways Deuteronomy summarizes the doctrines of the great prophets of the 8th century b. c. They also preached the absolute sovereignty of God, and Israel’s special relation to Him, with the consequent condemnation of idolatry. They spoke of God’s mercy and love with the consequent demand for justice toward one’s neighbor. In addition some believe Deuteronomy (or its nucleus) to be a compendium of doctrine saved from Samaria after its fall in 721 b. c. Even those who argue that its place of origin was Jerusalem hold to an 8th century date.

The exact form of the book of Deuteronomy discovered by King Josiah has been much discussed. The parts of the present book of Deuteronomy certainly had at one time been separate. The question is: When were these elements put together? Since reading the Law frightened Josiah (II Kings 22:11-13), the document probably contained at least some curses like those in the present chapter 28. More important, the basic structure of Deuteronomy—hortatory introduction with historical allusions, then stipulations (that is, the laws), and finally blessings or curses conditioned upon obeying the stipulations—clearly reflects a well-known form for an ancient treaty or covenant. Such a document was ratified by a ceremony, and Josiah’s lawbook led him to ceremonially renew the covenant between Yahweh and Israel. This is a further indication that the document had the familiar treaty structure, which called for such a rite. Thus, it would have resembled the present Deuteronomy with all of its basic parts.

Deuteronomy had an immense influence. In the interpretation that allowed worship in Jerusalem alone, it supplied the theology of the historian who gave definitive form to the history of Israel in Joshua-Kings and explained the fall of the Hebrew kingdoms. Its insistence on worship and its insistence that worship was possible only at Jerusalem gave the Judaism that grew up after the Exile its special form and character.