ABSALOM AND ACHITOPHEL, is a satire in heroic couplets, written in 1681 by John Dryden, who was then poet laureate, to defend the king’s party in England.

It refers in alleşorical form to the plan of Lord Shaftesbury (Achitophel) to install the duke of Monmouth (Absalom), the illegitimate son of King Charles II (David), on the throne, instead of the king’s reputedly Roman Catholic brother, James, duke of York. The satire stands out for its brilliant characterization, cogent political reasoning, and mastery of form. It succeeded brilliantly in exposing the characters and motives of the king’s opponents, and thus helped to kili the Bili of Exclusion by strengthening James’ succession. 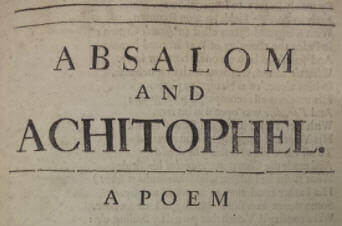 Taking a part of the story of Absalom’s rebellion against his father David (II Samuel 15-18), Dryden ingeniously adapts it to contemporary characters and conditions. The story of Absalom and Achitophel is slight and unimportant, but for this defect the characterization and political reasoning amply atone. The characters are neither merely impersonal types, nor, like most of Pope’s, are they too sharply individualized. Furthermore, they seemingly are drawn without personal animus, and the satirist has the air of pronouncing judgment like an Olympian. The portraits of Achitophel, Zimri (Buckingham), and Shemei (Slingsby Bethel) deserve their place in the picture gallery of great satire.

Scarcely less remarkable is the political philosophy of the poem, which mingles the specious with the profound. In the mouth of Achitophel, whose reasoning he seems to condemn, the poet puts arguments that are now generally accepted as valid. It is hard to teli just what Dryden really believed. The verse shows mastery of the heroic couplet, which Dryden perfected and which is, ali things considered, the best vehicle that English satire has discovered.

A second part of Absalom and Achitophel was written by Nahum Tate. To this John Dryden contributed only 200 lines (lines 310-509) on the poets Shadwell and Settle. They are in Dryden’s best vein and form the only readable portion of the poem.