Information on asthma disease, asthma cause and symptoms, prevention and treatment methods. 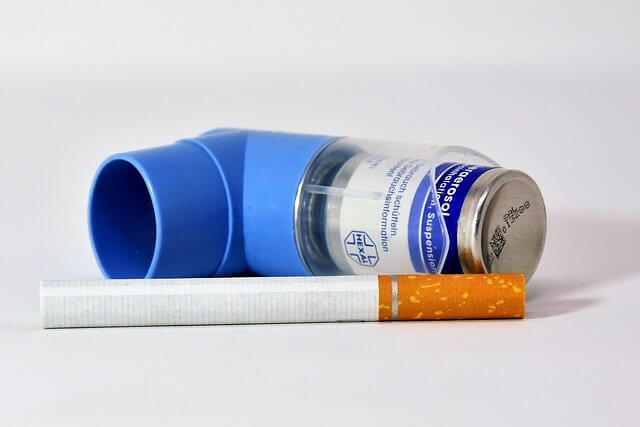 Asthma; is a disorder of the lung resulting in difficult breathing, characterized by attacks of coughing and shortness of breath, and accompanied by an audible wheeze or whistling sound during breathing. In severe attacks there may be varied degrees of anoxia (oxygen deficiency). Attacks may occur suddenly or have their onset insidiously, and may last from a few minutes to hours or days. During an attack there is difficulty in both inspiration and expiration so that the expiratory effort is continuous, interfering with talking and swallowing.

The symptoms of asthma are a result of the simultaneous spasmodic contraction of the muscles of the bronchioles (small bronchial tubes), a swelling of the tissues of the bronchial tubes, and the retention of the secretions of the bronchial glands. Numerous theories have been advanced as to the mechanism of the attack. The best evidence would indicate that there is a release of certain chemical substances (histamine, acetylcholine) within the lung tissue which in turn causes the bronchial muscle spasm, increased bronchial secretions, and swelling of the bronchial tubes. In the vast majority of cases, there seems to be a hereditary predisposition to the disease. In the presence of such a hereditary factor, the actual attack may be initiated by allergy to foods, drugs, miscellaneous inhalants (pollen, molds, pillow and mattress dust, animal danders, and a wide variety of air contaminants); or the attack may be precipitated by various emotional and psychic stimuli, nonspecific irritants such as smoke and gaseous fumes, or by upper respiratory infections (common cold).

Hay fever of the seasonal or year-round variety and atopic eczema may also be present in patients with asthma. This combination of conditions is slightly more frequent in men than in women. It is seen in all races and nationalities and is encountered throughout the world. It may be present in the mountains or at the seashore, although a change of locality is often an important factor for relief of the affliction.

Asthma may be present at any time of the year, but is more common in the summer and autumn,, possibly due to the presence of pollen, mold,spores, and dust in the air at these seasons. Exposure to cold air, upper respiratory infections, sinusitis, nasal polyps, and certain types of glandular disturbance may be contributory factors in some patients.

Several conditions produce symptoms similar to those of true asthma. Disorders of the kidneys or heart may cause labored breathing, and these are called respectively renal and cardiac asthma. Foreign bodies, such as peanuts, teeth, or coins, when aspirated into the air passages, may cause symptoms of asthma. Tumors within the lung or bronchial structure or pressing against the bronchial tubes from the outside may also produce a form of asthma. Pulmonary emphysema (dilated air sacs), bronchiectasis (dilatation and destruction of bronchial walls), tracheobronchial tuberculosis, and other lung infections also may cause people to wheeze and must be differentiated from true asthma.

An asthmatic attack may start at any time but it most frequently occurs during the night after a few hours of sleep. The patient will notice a choking sensation, tightness in the chest, shortness of breath, and audible wheezing which may produce thick, mucoid sputum. The appearance of the patient during an asthmatic attack is impressive. He will be sitting upright in order to use all the auxiliary muscles of respiration. The face is pale and anxious, the voice is gasping and speech is difficult, the eyes become prominent, the lips may take on a bluish hue, and beads of cold, clammy perspiration are seen on the forehead and face; breathing is seen to be labored and extremely difficult. The attack may reach its apex in a few minutes and persist for a brief period of time, or it may persist for hours or days. Once it is over, the person feels perfectly well, except for fatigue, until the onset of the next attack.

To prevent asthma it is necessary to know its cause. This may be determined by a careful and detailed history, a thorough physical examination with the aid of X-rays, certain laboratory studies, and skin tests in selected instances. Prolonged observation of the patient, with historical association between trigger agents and the attacks, frequently must be made. The ultimate prognosis for relief is good provided that the allergic cause, such as foods and inhalants, is properly identified and eliminated or protected against by means of allergic injections. Correction of chronic infections, an adequate liquid intake, and correction of psychic disturbances are all important adjunct therapeutic procedures.

There are a number of ways and procedures by which an acute attack of asthma may be relieved. These procedures are not curative but are simply for the purpose of arresting the attack, although all of them may be repeated over and over again with therapeutic effectiveness. Probably one of the oldest asthmatic remedies is the inhalation of fumes from burning cigarettes or powders containing stramonium leaves (atropine) and saltpeter (potassium nitrate). The odor is pungent and offensive, so that at present it is not used extensively. Inhalation of a vapor of adrenalin atomized from a nebulizer has proved to be effective and is used extensively. Potassium iodide and other iodide salts have been used for centuries for the treatment of chronic asthma. Injections of adrenalin or administration of amino-phylline or ephedrine have also proved to be exceedingly effective in stopping the paroxysms, often within a few minutes’ time. Corticotropin (a hormone manufactured by the pituitary gland) and adrenal corticosteroid hormones have demonstrated their value in the symptomatic relief of asthma, especially in the chronic types.

Children withstand attacks better than adults, and in their cases asthma is apt to disappear at puberty. Persons beyond middle age are less likely to have a complete remission, although asthma, as such, rarely shortens life. Much, however, can be done to prevent future symptoms if the cause of the attacks can be determined and proper treatment instituted.