Boötes is one of the largest constellations visible in the sky. Located in the northern celestial hemisphere, the constellation is described as a diamond-shaped three star sign formed by the brightest stars. 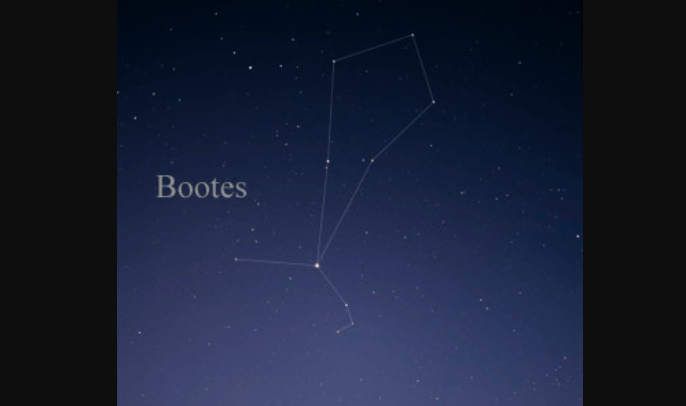 Boötes is the 13th largest constellation in the night sky, covering 907 square degrees. It is located in the third quarter of the northern hemisphere (NQ3) and can be seen at latitudes between +90° and -50°. Neighboring constellations are Canes Venatici, Coma Berenices, Corona Borealis, Draco, Hercules, Serpens Caput, Virgo, and Ursa Major.

The Legend of the Shepherd Constellation (Boötes)

Boötes is traditionally depicted as a shepherd holding two hounds on a leash in one hand and a stick in the other. Seen in the sky, it is a constellation that follows the pole of Ursa Major. In legend, the constellation Boötes represents a plowman driving oxen in the constellation Ursa Major, followed by his two dogs Asterion and Chara (the constellation Canes Venatici is represented by hounds). Plowman’s oxen are tied to the polar axis, and their movements keep the sky in constant rotation.

Boötes represents Arcas, son of Zeus, and Callisto, daughter of Arcadian king Lycaon. Arcas was raised by his grandfather, the king, who decided to test Zeus by serving food to his own son. Zeus knows Lycaon’s intentions and turns the cruel king into a wolf. He strikes down all his sons and brings Arcas back to life.

When Zeus’ wife, Hera, hears of her husband’s infidelity, she turns Callisto into a bear. Years later, Callisto wanders through the woods until she meets her now grown son. Arcas does not recognize his mother and starts chasing her. Callisto hides in a temple where he cannot harm a holy place without risking conviction for defiling it. To avoid a tragedy, Zeus sends them both into the sky. Here, Callisto takes on the role of Big Dipper and Arcas takes on the role of Boötes.

Arcturus is the brightest star in the northern sphere. Its apparent magnitude is -0.04. It is within Alpha Centauri itself. The name Arcturus means “guardian of the bear” in Eskisu. The star is located on the left leg of the Shepherd constellation, which stands next to the constellations Ursa Major and Ursa Minor.

Alpha Boötis is approximately 36.7 light-years from Earth. It has a luminosity of at least 110 times that of the Sun and a very high self-motion. It has been calculated that after approximately 4,000 years, it will reach its closest position to the Sun.

Advertisement
Arcturus is believed to be an ancient disk star. It appears to be traveling with a group of 52 ancient disc stars, often referred to as the Arcturus group.

Nekkar is a yellow star located 219 light-years from Earth. The name Nekkar is derived from the Arabic word for “cattle”. This star is also called Meres.

Seginus is a Delta-type model star seen in non-radial brightness. The star is about 85 light-years away. Its luminosity ranges from magnitude 3.02 to 3.07. The star belongs to the spectral class A7III.

It is a binary star in the Izar Boötes order, about 300 light-years away. It consists of a bright giant and a smaller, fainter star. Epsilon Boötis is also known as Pulcherrima, which means “the most beautiful” in Latin. The name Izar comes from the Arabic word for “veil”.

Eta Boötis is a spectroscopic binary star with a period of 494 days. It lies next to Arcturus in the sky, just 3.24 light-years away. The name of the star is Muphrid and is derived from the Arabic phrase “one person with a spear”. Also known as saak. Muphrid is located 37 light-years from Earth. It belongs to the G0 IV spectral class. It has a significant excess of elements heavier than hydrogen.

Mu Boötis is also known as Alkalurops. Its name comes from the Greek word kalaurops, meaning “shepherd’s staff”. Alkalurops is a triple star about 121 light-years away. Its brightest appearance is a yellow-white F-type subgiant with a magnitude of 4.31.

Merga is located about 153 light-years from Earth and belongs to the spectral class F7IVw. The name Merga is derived from the Arabic word meaning “chain expression”. The star has a luminosity of 5.74.

Psi Boötis or Nadlat is an orange K-type giant located 250 light-years away. The star’s luminosity is 4.52 kardir.

Tau Boötis is another binary star in Boötes, located about 51 light-years from Earth. It consists of a yellow-white dwarf and a pale red dwarf. Orbiting the primary star is a planet discovered in 1996 and confirmed in 1999.