Humphry Davy; (1778-1829), English chemist, who isolated the metals sodium and potassium, established the elementary nature of chlorine and iodine, and invented the miner’s safety lamp. He was born in Penzance, Cornwall, on Dec. 17, 1778. His early bent was more to poetry and literature than to science, but this interest was thwarted when his father died in 1794. Davy was the eldest of five children and became the main support of his family. While apprenticed to a surgeon-apothecary in Penzance, he began to educate himself in the sciences and philosophy. 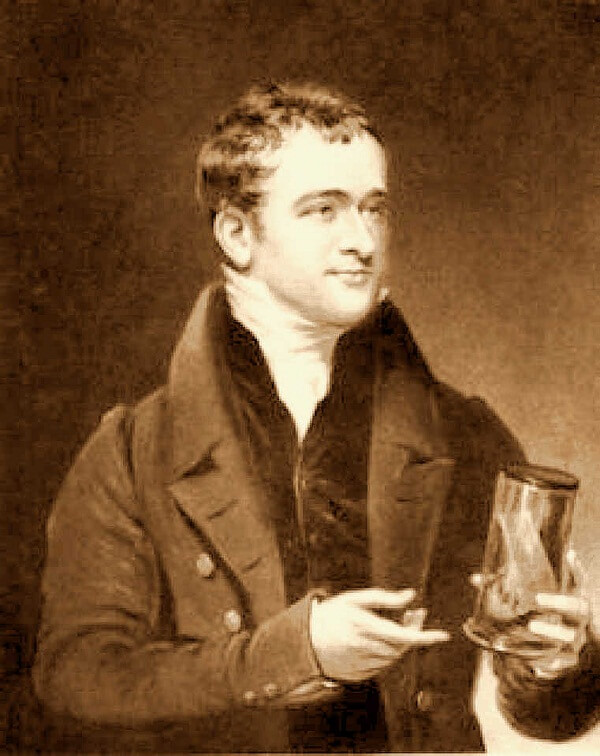 It was Lavoisier’s great Elementary Treatise on Chemistry that first stimulated Davy to perform some simple experiments. His first extended work was an attempt to prove that Lavoisier’s theory of heat and light was wrong. With only a few experimental facts to guide him, Davy embarked on a long flight of speculation that resulted in the publication of two papers. Although there were some shrewd conclusions in these papers—in one he attempted to prove the immateriality of heat by rubbing two blocks of ice together in a vacuum—the speculations had too little foundation. The criticism and ridicule that these papers brought down on Davy caused him to avoid speculation in public thereafter and to withhold most of the theoretical views that guided him in his research.

In 1798, Davy joined Dr. Thomas Beddoes in Bristol at the Medical Pneumatic Institution, which Beddoes had just established. Here Davy performed the work later published in his classic Researches, Chemical and Philosophical, Chiefly Concerning Nitrous Oxide (1800), which established his scientific reputation. In 1801, Benjamin Thompson (Count Rumford) invited him to become lecturer on chemistry at the newly founded Royal Institution of Great Britain in London. Davy accepted and thus began the most productive period of his scientific life. He also became a popular lecturer on scientific subjects.

In 1800, Alessandro Volta announced the invention of the voltaic pile, which made electric current available for the first time. Soon after, William Nicholson and Anthony Carlisle discovered that an electric current could decompose water. Davy then plunged into an investigation of electrolysis and established the electrical nature of chemical affinity. This work was the basis for the later electrochemical theory of his protégé, Michael Faraday. In 1808, Davy isolated the metals sodium and potassium by means of electricity. The failure of electricity to affect the green gas produced by the decomposition of muriatic acid led him to insist that the gas was an element, which he called chlorine in 1810. While in Paris in 1813, he recognized the similarity between chlorine and a substance that formed purple fumes and announced the discovery of a new element, iodine.

After Davy was knighted and married in 1812, he lost interest in scientific work and returned to original research only sporadically. His most important work during this period was the invention of the miner’s safety lamp, known as the Davy lamp, in the winter of 1815-1816. In 1818 he was made a baronet, and in the same year he became president of the Royal Society. In 1826 his health, which had never been good, began to fail. He died in Geneva, Switzerland, on May 29, 1829.