The 13 British colonies were the germ of the United States. By becoming independent of the English crown they became the first states of the American Union.

It required great sacrifices and learning to reach success, but eventually they progressed forming the seed of the nation of the current 50 states.

There was a precedent of the 13 colonies, the so-called “Lost Colony” or Roanoke, founded when Queen Elizabeth I authorized Walter Raleigh to found a British colony in America.

However Raleigh was not authorized to travel, instead sending several captains who identified Roanoke Island for the task.

Several settlers were sent, but returned shortly after the failure, among them John White, who made drawings of the new lands. Sir Raleigh sent another expedition under the command of John White in 1587, another group, this time of entire families, came to settle on the island. White returned to Britain, but not before agreeing with the settlers that if they had to leave the settlement by force, they would make the shape of a Maltese cross on a log. White could not return to America until after three years.

By then, he found no trace of the settlers. Only one word carved in the trunk of a tree: “Croatoan”, the name of a nearby island. It is one of the great mysteries of US history. 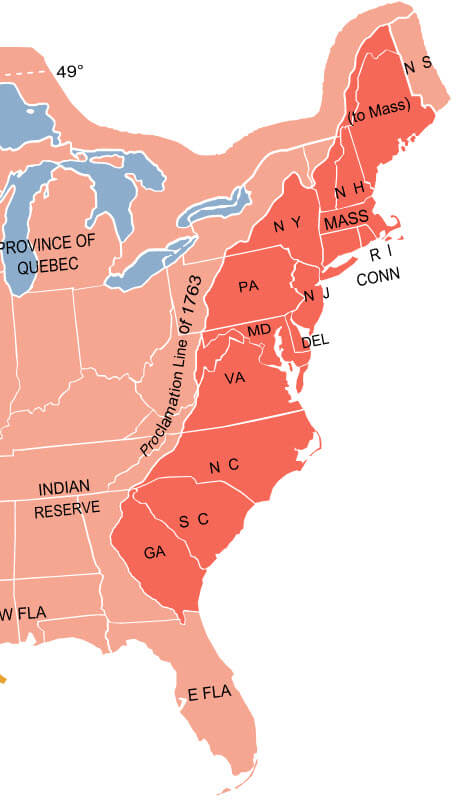 Virginia (1607-1624): Initially called “Jamestown”, was founded by the London Company, which was a group of merchants who decided to invest money in the company and lent money to settlers who would pay with wood, furs, gold or silver.

They also tried to find a passage to India, which would favor trade. It was founded during the reign of James I, hence its name.

In 1624, Virginia was recognized by the king. They were dedicated to the cultivation of tobacco.

Massachusetts (1620): Founded by separatist Puritans who left Holland in 1608 and decided to seek refuge in America.

They arrived on the Mayflower ship. These pilgrims created the so-called Mayflower Compact, an agreement through which they formed a kind of government that would submit to the will of the majority, which laid the foundation for writing the constitution.

New Hampshire (1623): Founded by John Mason who came from the county of Hampshire in England. He himself sent men into the American territory to form a colony dedicated to fishing. It was part of Massachusetts.

Maryland (1632): It was founded by Lord Baltimore (Cecil Calvert) who wanted to create a refuge for persecuted Catholics after the Protestant Reformation in England. They cultivated tobacco and proliferated non-Protestant sects.

Connecticut (1635-1636): Founded by Thomas Hooker and a group of Massachusetts settlers in search of more freedom and economic opportunities. For this, they decimated the Pequot Indians, original inhabitants of the site with a war between 1636 and 1637. They created the Fundamental Orders of Connecticut, considered by many the basis of the Constitution of the United States.

Rhode Island (1636): Founded by Roger Williams, who was expelled from the Massachusetts colony for his ideas of separating the church from the state and guaranteeing freedom of religion.

He lived with the Narragansett Indians and formed Providence in 1636. Anne Hutchinson was also censored for speaking out against the Church in Massachusetts Bay. She created Portsmouth. They both joined Providence Plantations, which later became Rhode Island.

Delaware (1638): Founded by Peter Minuit and the New Sweden Company. When King Charles II gave James, Duke of York, New Holland, he demanded compensation and changed the name from New Sweden to Delaware. It was part of Pennsylvania until 1703.

North Carolina (1663): Founded by settlers from Virginia who requested authorization to found a colony, this was Carolina, which was divided by internal problems in North and South Carolina in 1729. It is located gift of was the lost colony, in Roanoke.

Then it was divided, due to internal problems, and the crown decided to create two separate territories: North Carolina and South Carolina. It was one of the colonies with the most economic progress.

New Jersey (1664): Founded by Lord Berkeley and Sir George Carteret, close friends of the Duke of York, who received control of New Holland, which would become New York and gave them the lands. The Quakers later bought the rights.

New York (1664): Founded by James, Duke of York, who took control over the colony called New Netherland (New Holland). Originally on the territory that is today Brooklyn, it was a center of commerce.

Pennsylvania (1682): William Penn was founded with the payment of a debt to his father, and with the aim of fleeing religious persecution against the Quakers, a group of which he was a part. It became a prosperous colony in the 18th century.

Georgia (1732): It was founded by the British military James Oglethorpe under an order of King George II, with the aim of creating a colony so that the debtors who served in prison could start a new life, and to stop the advance of the Spanish settled in Florida.

In 1773 the city of Savannah was founded, with the intention of producing silk and without slave labor, whose pagan beliefs were against Christianity. However, by 1752, when it became an official colony, the economy of plantations and slave labor predominated.