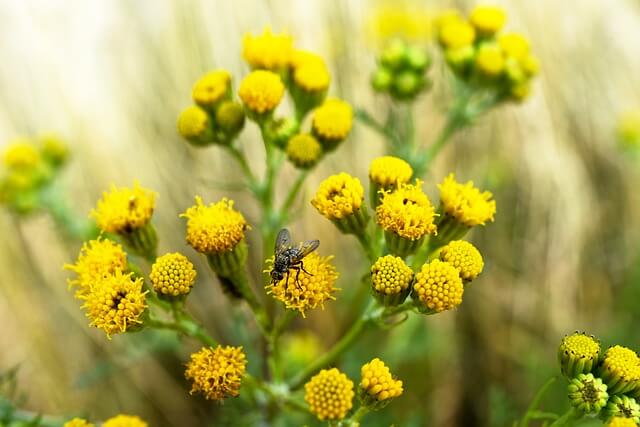 Groundsel; is a plant belonging to a very large genus, or group, of plants called Senecio, which is part of the Compositae, or daisy-like family. However, unlike the daisy, all the tiny flowers, or florets, that make up its head are alike. They are yellow and tube-like and are crowded into a ring of long, green bracts (bracts are like small leaves). Each floret is surrounded by what botanists call a pappus of silky white hairs, instead of ordinary sepals, and when the fruit is ripe the pappus acts like a parachute and carries it away. Just before the parachutes float off, their white fluffiness looks like the hair on an old man’s head. Because of this, the genus name Senecio was chosen, since it comes from the Latin word senex, meaning “old man”.

Groundsel is a very widespread weed and grows a foot high. Its stalkless leaves, which are half wrapped round the stem at their base, are feather-shaped and deeply toothed. Few insects care for the nectar of the flowers, but as the pollen falls off one flower on to the stigma of the same flower, the groundsel flowers are able to pollinate themselves. Groundsel gives gardeners a lot of work rooting it out from between the garden plants in borders and beds, but it is useful to people who keep pets, for it is good food for rabbits and cage-birds, particularly canaries. There is a proverb at least four centuries old that says: “The groundsel speaks not, save what it heard of the hinges.35 Groundsel here means door-sill (doorstep), and as the earth that collects against doorsteps often contains the weed, perhaps this is a clue to its English name. 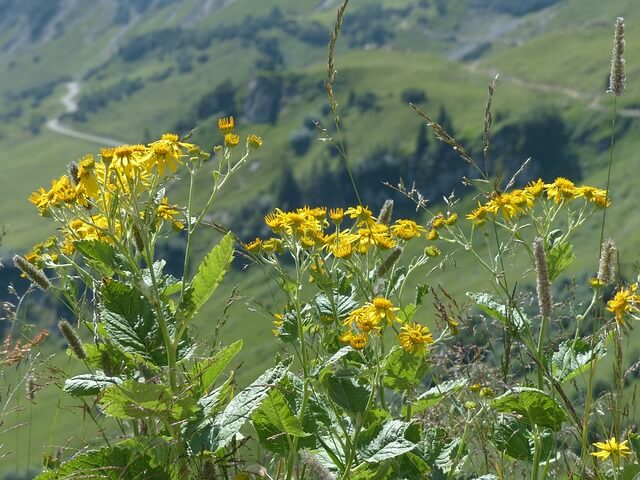 Another weed of the same genus is the yellow ragwort. Senecio also includes the silvery-grey shrubs that grow at the seaside, and the cineraria, a greenhouse plant, which is usually a brilliant blue but may be purple, white, cream or pink.