Aaron Burr; (1756-1836), American politician and adventurer. Dynamic and ambitious, he built a strong political following and rose to the office of vice president of the United States (1801-1805). But he is remembered more for his duel with Alexander Hamilton, which resulted in the latter’s death, and for his schemes of empire, which resulted in his trial and acquittal on charges of treason.

Burr was born in Newark, N. J., on Feb. 6, 1756. Of distinguished ancestry, he was the son of the Reverend Aaron Burr, the co-founder and second president of the College of New Jersey (now Princeton University), and Esther Edwards Burr, the daughter of the New England theologian Jonathan Edwards. Both parents died before he was three years old, and his early training was assumed by an uncle, the Reverend Timothy Edwards.

A precocious youth who would rebel against authority throughout his life, Burr escaped the strict discipline of his uncle’s home to enter Princeton as a sophomore in 1769 at the age of 13. Graduating with honors in 1772, he studied theology and then abandoned it for law, but he had not progressed far when the Revolutionary War changed his plans. 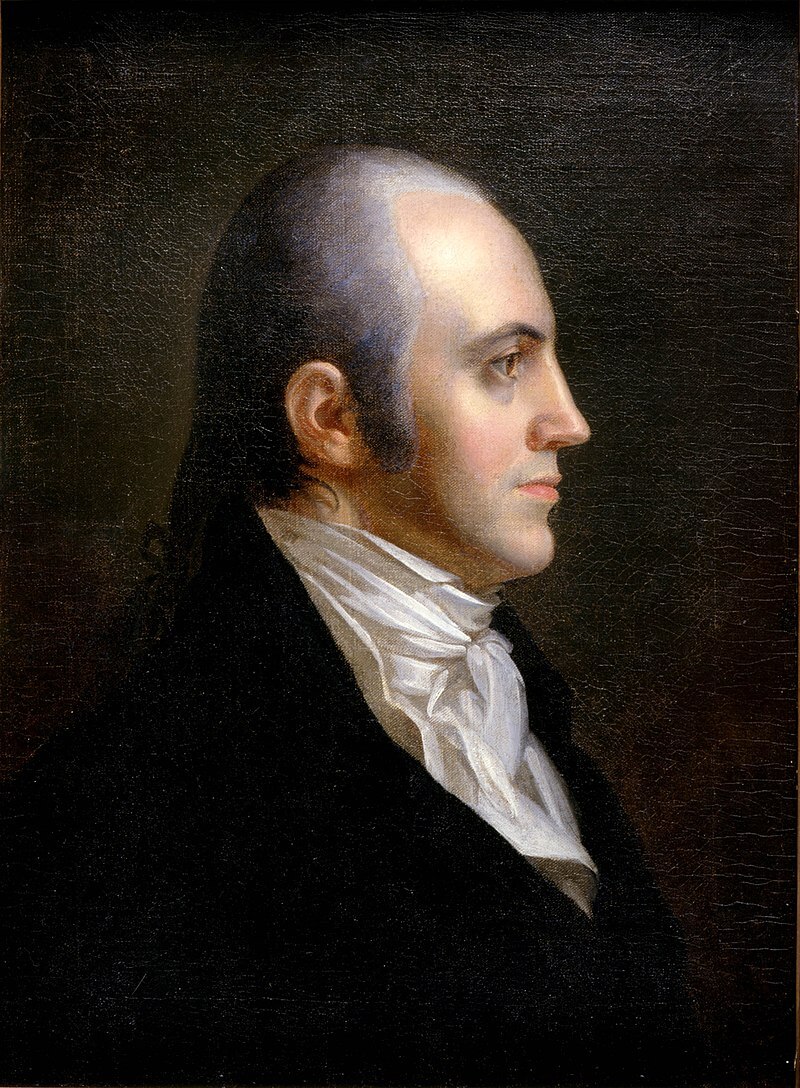 Burr served on Benedict Arnold’s staff, where he met James Wilkinson, who was to figure in his later plans; he then served briefly with George Washington and later with Gen. Israel Putnam. In July 1777, as a lieutenant colonel, he took over command of a regiment. He fought in the Battle of Monmouth the next year and resigned because of ill health in 1779.

When fully recovered, Burr resumed his law studies and was admitted to the New York bar early in 1782. A few months later he married Theodosia Prevost, a widow with five children. Theodosia was 10 years Burr’s senior, but he seems to have been devoted to her until her death in 1794. She bore him a daughter, also named Theodosia, whom he idolized.

In the bustling, commercial city of New York, Burr soon was competing with Alexander Hamilton for supremacy at the bar. He was adroit rather than profound, with a magnetic personality and a quick mind not overburdened with scruples.

Before the rise of political parties, New York state was divided between Hamilton and Clinton factions. Burr became politically active in 1789, when Gov. George Clinton appointed him attorney general. Two’ years later he defeated Gen. Philip Schuyler, Hamilton’s father-in-law, for a seat in the U. S. Senate. Failing reelection in 1797, he entered the New York legislature. The immediate instrument of his political success was the Tammany Society, founded in 1789 as a social club but converted by Burr into a powerful urban machine.

By 1800, Burr controlled the legislature and thereby the choice of presidential electors in a state whose vote was likely to decide the outcome. To assure his support he was placed on the Republican ticket for vice president. The Republicans won, but in the electoral college Burr and Thomas Jefferson (the intended presidential candidate) tied with 73 votes each, throwing the choice between them into the U. S. House of Representatives. There Federalist votes kept the election deadlocked until the 36th ballot, when Hamilton’s influence gave the presidency to Jefferson. Burr became vice president.

There is no evidence that Burr intrigued for Federalist support, although Jefferson believed that he had. Although as vice president Burr was willing to cooperate with the president, he was rebuffed. He was not consulted on appointments nor was he invited to join in party councils. It is not surprising that he began to look to the Federalists for his own future.

Jefferson’s administration was bitterly opposed in New England, even to the point of separatist thinking. Burr undoubtedly was sounded out by those who hoped to take the disaffected states out of the Union. It may well have been with the idea of attaching New York to a Northern confederacy that Burr sought the governorship of the state in 1804. He carried New York City, mainly with Federalist votes, but was badly beaten upstate, in part by Hamilton’s opposition.

The Duel and the Conspiracy. In the course of the gubernatorial campaign, Hamilton had made derogatory remarks about Burr, who responded with a challenge. On July 11, 1804 the two men exchanged shots at Weehawken, N. J., and Hamilton was mortally wounded.

A fugitive from the law in both New York smd New Jersey, Burr fled to Philadelphia, where he and Jonathan Dayton, a former U.S. senator from New Jersey, developed the grandiose scheme that was to prove Burr’s downfall. Just what the plans were and whether they were treasonous are uncertain, for Burr told different stories to different people. In its most ambitious form the scheme envisaged a vast empire in the West and South, based on the conquest of Mexico and the separation of the trans-Appalachian states from the Union. This much Burr told the British minister, of whom he asked financial and naval aid.

Burr then proceeded to Washington to finish his term as vice president. Jefferson received him cordially, for Burr as vice president was to preside over the impeachment trial of Supreme Court Justice Samuel Chase, and the President wanted a conviction. The Chase impeachment failed, but Burr’s conduct of the trial was a model of decorum and impartiality.

The trial and the vice-presidential term concluded, Burr returned to his schemes. He made a personal reconnaissance of the West in the spring of 1805. It probably was on this trip that he first met Harman Blennerhassett, an Irish expatriate who lived in feudal splendor on an island in the Ohio River. He also visited James Wilkinson, now governor of the Louisiana Territory, and several other government dignitaries. Burr next acquired title to more than a million acres of land in Orleans Territory, the settlement of which thereafter became his ostensible purpose. Funds were supplied by his son-in-law, Joseph Alston, and by Blennerhassett. 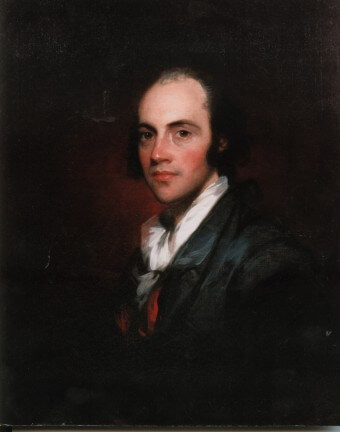 By the summer of 1806, boats, supplies, and men were being procured, mainly at Blennerhassett Island. Satisfied, Burr and some 60 followers set out to join Wilkinson near Natchez, Miss. Coded letters from Burr and Dayton already were on the way to Wilkinson alerting him to be ready to move on Mexico.

The preparations openly being made seemed too extensive for the avowed purpose, giving substance to rumors that approached the truth. To protect himself, Burr demanded an investigation. With young Henry Clay as his attorney, he twice was cleared of any treasonable intent.

At this point, however, General Wilkinson decided to betray his friend. He wrote to the president, who issued a proclamation calling for the arrest of the conspirators. Burr learned of it on Jan. 10, 1807, as he entered Orleans Territory, then saw a newspaper transcript of his coded letter to Wilkinson. He surrendered to civil authorities at Natchez, but jumped bail and fled toward Spanish Florida.

He was intercepted on February 20 and conveyed to Richmond. There he was arraigned before Chief Justice John Marshall, and on June 24 he was indicted for treason. Dayton and Blennerhassett also were indicted, while the chief witness for the government, Wilkinson, barely missed a similar fate. The trial was anticlimactic. Burr was acquitted September 1, after Marshall ruled that acts of treason must be attested by two witnesses.

Harassed by creditors and with no prospect of a return to public life, Burr slipped away to Europe. He tried in vain to recoup his fortunes. In June 1812, Burr returned almost unnoticed to New York. In quick succession he received two crushing blows, the death of his grandson and then of his daughter. He spent the remaining years of a long life as a moderately successful New York attorney. In 1833, at the age of 77, he married Eliza Jumel, a wealthy widow. Eliza was granted a divorce on the day that Burr died in Staten Island, N. Y., Sept. 14, 1836.