Rub your hands quickly together. Your hands warm up. Some of the work of rubbing has turned into heat. Benjamin Thompson was the first man to study the relationship between work and heat. He showed that you could get endless amounts of heat from friction. But Thompson never made measurements to find the exact amount of work needed for a given amount of heat.

From 1842 to 1870 James Joule conducted a series of work and heat experiments. Joule used an apparatus to determine the relation between mechanical energy and heat energy. 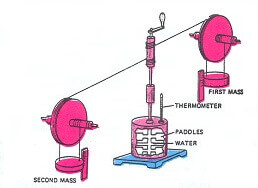 The work produced by the falling weights makes the paddle wheels turn. The wheels stir the water and the water gets warmer. This shows that work has been turned into heat. Joule measured this heat as the increase in temperature of water whose mass and specific heat were known.

Joule also used electricity to heat water. He found that the increase in the temperature of water depended on the amount of electric energy used. In some buildings, water is heated by the electricity.