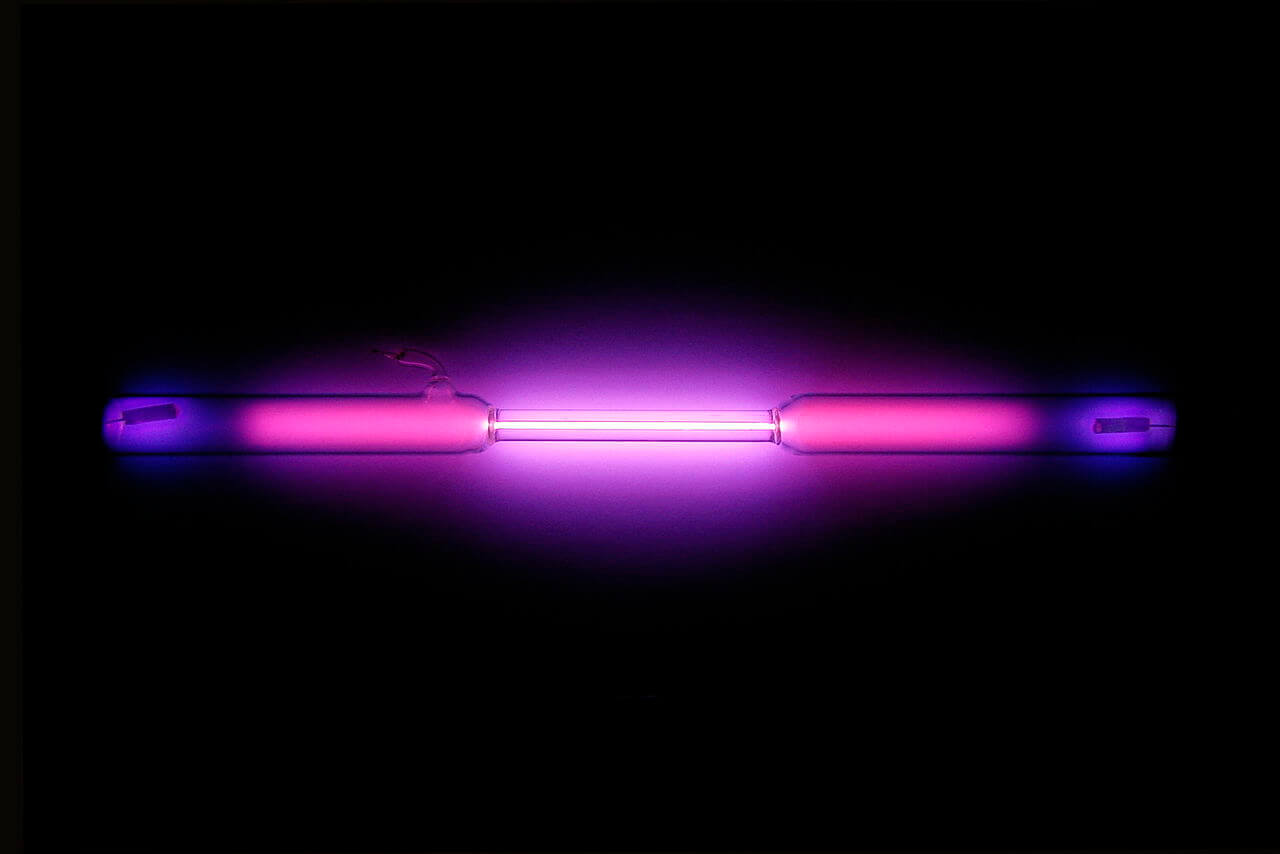 Argon was the first inert gas to be discovered. Its discovery took place in England over a period of 110 years, starting with the observation by Henry Cavendish in 1784 that atmospheric nitrogen could not be made to react completely with oxygen. In 1894, Sir William Ramsay and his assistant, Percy Williams, isolated a small sample of the nonreactive portion of atmospheric nitrogen and gave it to Sir William Crookes for spectrograph«; examination. The spectrum of the nonreactive gas was different from that of any of the elements then known. After this identification of a new element, the gas was named “argon.”

Dry air contains 0.934 percent by volume (1.288 percent by weight) of argon. Argon is continually produced in the earth’s lithosphere by the radioactive decay of potassium-40 in minerals that contain potassium. This argon works its way up through the earth’s crust into the atmosphere. Although this process increases the quantity of argon in the atmosphere, the increase is so gradual that no change in the argon concentration can be detected in a lifetime.

Atmospheric argon is a mixture of three isotopes: argon-40 (99.6 percent), argon-38 (0.063 percent), and argon-36 (0.337 percent). Each of these isotopes has 18 protons in the nucleus, together with enough neutrons to bring the mass number up to 40, 38, or 36. The atomic weight of argon is the average of the weights of all atoms in a sample of atmospheric argon. Its atomic weight is 39.948 on the scale (adopted by international agreement in 1961) on which the atomic weight of the carbon-12 isotope is exactly 12.

Besides the three stable isotopes of argon, there are five radioactive isotopes. These have the mass numbers 35, 37, 39, 41, and 42, and their half-lives are 1.83 seconds, 35 days, 265 years, 110 months, and 3.5 years, respectively. Chemical Activity. The chemical properties of any element are determined by the number and the configuration of the electrons outside the nucleus of the atom. In all atoms of argon there are 18 electrons outside the nucleus. They are arranged in shells (energy levels) of 2, 8, and 8 electrons, passing from the nucleus outward. The electrons in each of these shells are in a stable structure that is representative of the so-called “inert-gas configuration.”

In a chemical reaction between two atoms, an outer electron of one atom is either donated to another atom or shared by the two combining atoms. In atoms of argon, and in the atoms of most of the other helium-group gases, the electrons are in such a stable configuration that they are neither shared nor donated. Thus the helium-group gases are quite unreactive. The molecule of argon contains only one atom, and no compounds (in the ordinary sense of the word) of argon have ever been prepared. However, argon does take part in formations called “clathrates,” in which some argon, called the “guest,” is held by weak adsorptive forces in a crystalline cage formed by a second substance, which is called the “host.” Argon hydrate, for example, is actually a clathrate in which water molecules make up the host and argon is the guest. 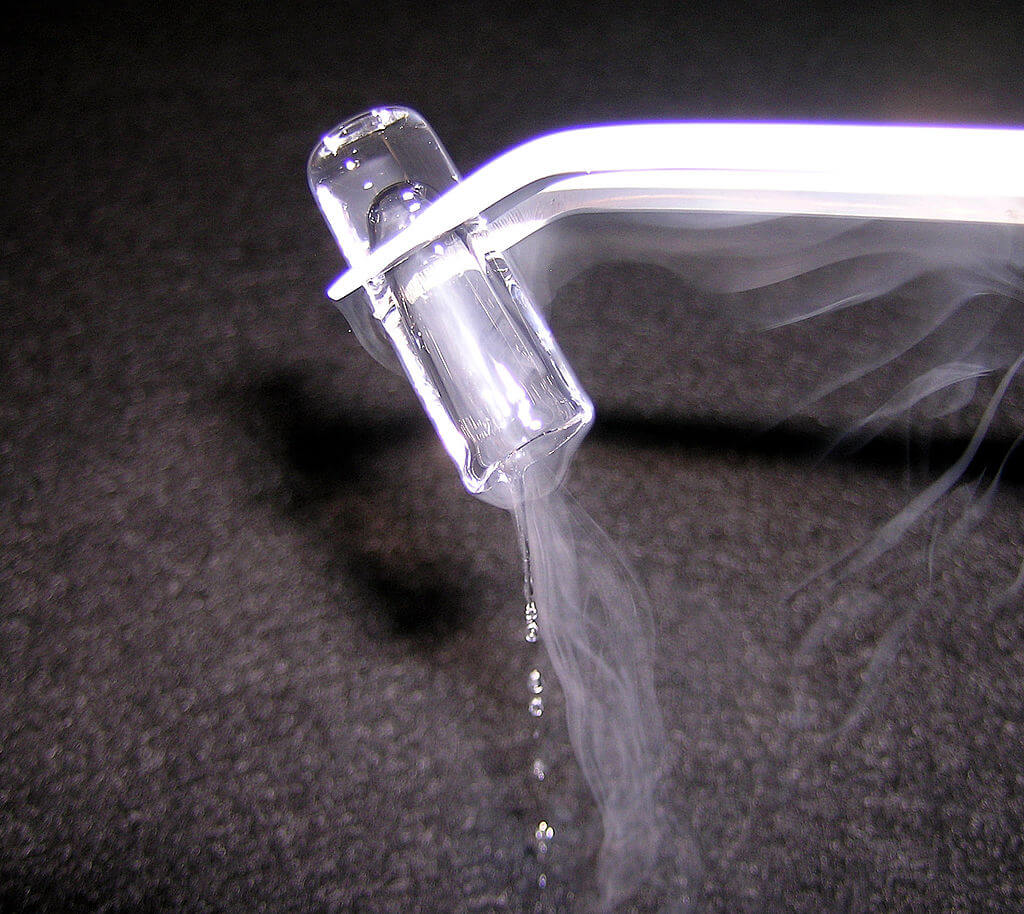 Before 1962 it was thought that none of the helium-group gases could form any stable chemical compounds. In that year Neil Bartlett, then of the University of British Columbia, announced that he had succeeded in carrying out a true chemical reaction between xenon and platinum hexafluoride to form a stable compound of xenon. Since then a few other compounds of xenon, mostly fluorides, have been prepared by various investigators. Badon and krypton can also form a few compounds, but argon and the lighter helium-group gases apparently do not react, even with flourine. The names “inert gases” and “noble gases” for the elements of the helium group are still applicable because even xenon is monatomic and inert to most elements. The use of the word “noble” probably originated from the supposed aloofness of the nobility. The term “rare gases” applies strictly only to neon, krypton, xenon, and radon.

Commercial argon is produced concurrently with oxygen and nitrogen by separation of the components of air. The air is liquefied and then distilled in a double distillation column of special design. Commercially pure nitrogen comes off the top, and oxygen is collected at the bottom. Crude argon is taken from a point in between. It is then redistilled in a separate column to produce a product that usually has a purity of at least 99.996 percent. A modern air-separation plant that produces 500 tons of oxygen per day can produce about 25 tons of argon per day. Argon is commonly shipped as a liquid in insulated railroad tank cars or in insulated tanks mounted on truck trailers. 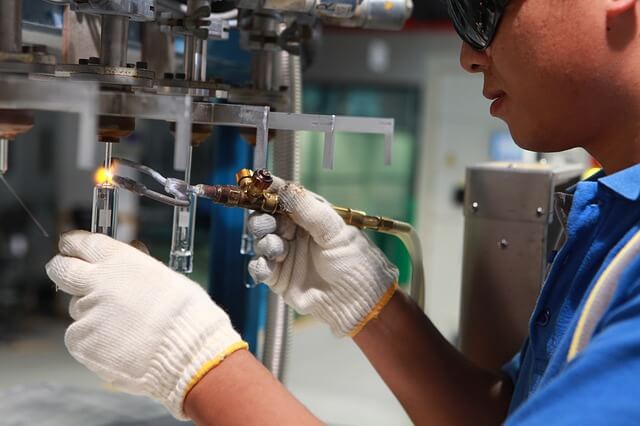 The largest single use for argon is in inert-gas-shielded electric arc welding. In the electric welding torch the argon serves two functions: it is ionized to carry the electric arc, and it protects the torch and the parts being welded from attack by oxygen of the air. This protection at the high temperature of the welding process results from the fact that argon is a chemically inert gas.

An important use for argon is to provide a protective atmosphere around hot or molten metals, such as titanium, that react readily with oxygen or nitrogen while they are being cast or shaped. In an increasingly important application, dissolved gases are swept out of molten steel by bubbling argon through it; this method provides a higher quality steel product.

Most ordinary electric light bulbs and fluorescent lamps are filled with argon or gas mixtures containing argon. In the ordinary tungsten-filament bulb the main function of the argon is to suppress evaporation of the hot tungsten and thus lengthen the life of the lamp. In the fluorescent lamp the argon is ionized and thus helps to maintain the electric discharge that excites the phosphor on the inside of the tube.