Ducks are noted for their spectacular, long-range migrations. They migrate in response to severe climatic conditions, such as cold or drought. Migration is common in high latitudes, especially in the Northern Hemisphere, where the migrations are climate-controlled and usually involve movements during favorable following winds. The ducks remain in the north until pushed south in mass migrations that take a large percentage of the population 1,000 to 1,500 miles (1,600-8,000 km) southward within a few days. Migrations are erratic in the Southern Hemisphere desert marshes where water levels vary dramatically. 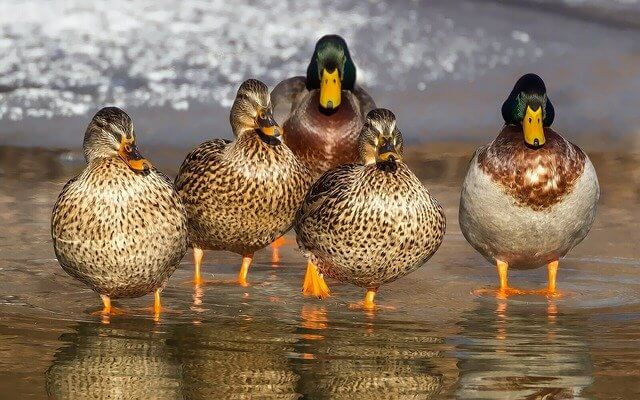 The routes traveled by migrating ducks have been observed and studied by the recovery of banded, or marked, birds. The routes tend to follow major topographic features, such as coastlines, rivers and mountain ranges. The resulting broad flight lanes are called flyways. Four flyways—Atlantic, Mississippi, Central, and Pacific—occur in North America.

Although little work has been done on the methods of navigation used by ducks, it is believed that ducks use the position of the sun and stars as well as topography for orientation. Young ducks instinctively migrate in certain directions, whether or not adults are in the flock.

Dabbling ducks feed from the surface of the water. They usually feed in shallow marshes and lakes on seeds, tubers, and other vegetative parts of plants, as well as on insects and other invertebrates. In very shallow water, they submerge only their bills and strain out small food organisms. As the depth of the water increases, they submerge their heads and finally turn upside down in an attempt to find food. Some dabbling ducks will also eat cultivated grains, causing considerable damage. They also feed on flooded crops such as rice.

Inland diving ducks (pochards) dive in depths of 3 to 20 feet (1-6 meters) of water to obtain bottom-dwelling invertebrates and the vegetative parts of submerged plants. Sea ducks pursue larger bottom-dwelling mollusks and some fish. Some sea ducks have been caught in fishermen’s nets at depths of 150 to 180 feet (45-55 meters). Such deep-diving sea ducks may use their wings in diving, but most ducks do not.

The reproductive cycle of ducks has been best studied among Northern Hemisphere ducks. Dabbling ducks pair in the early winter prior to migration, but sea ducks and inland diving ducks court later. All may still be actively courting during the migration or on breeding areas. The courtship displays of ducks are among the most spectacular in birds. Males of most species display in groups. Generally, but not in every case, the display takes place in the presence of a female. The male’s display is often characterized by his conspicuous colors, by movements of his head, wings, or tail, and by feather erection. His calls are whistles and grunts. Females have limited vocalizations but avoid unwanted males by being aggressive or by flying away. Males pursuing an unmated female often gather in groups of 15 or more and form high-flying maneuvering courtship flights.

Pair bonds are constantly tested and probably exchanged until a firm seasonal pair is established. (Ducks, unlike geese, form pair bonds for only one season, and they rarely establish family units.) After the pairs are established, copulation takes place on water in isolated areas. Females of some species will accept as many mates as they can attract. 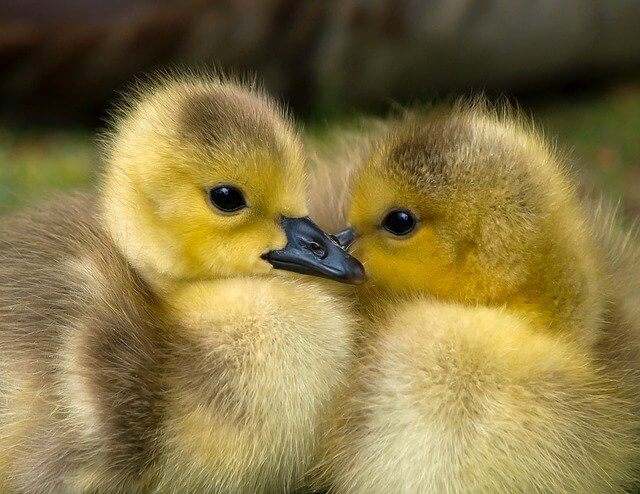 Although island-nesting species, such as eiders, are highly social in their nesting, most pairs segregate on nesting areas. The males are aggressive and usually like to have a space between pairs.

Although some ducks have weak maternal drives and desert their nests and young, only one duck—the black-headed duck (Heteronetta atricapilla) of temperate South America—is fully parasitic. It apparently never nests but lays its eggs in the nests of any marsh bird. The young stay there only until they are dry and then leave the nest and feed and care for themselves.

The first egg is laid during the first or second day of nest building, and most species lay at intervals of 1 to 1 1/2 days until the clutch is complete. Clutch size varies from 4 to 12, but even more eggs may be found in a nest when several females lay in the same nest. The incubation period, timed from the laying of the last egg until its hatching, varies from 21 to 35 days. In all true ducks, the female alone incubatcs the eggs, but in whistling ducks, the males incubate the eggs. Female ducks leave the nest once or twice a day so that they may drink and feed.

Many animals prey on duck eggs in the “nest. Ground-dwelling ducks commonly lose 60% to 85% of their clutches, while ducks that nest over water or in tree holes are more successful. Females commonly renest until a brood is produced.

Care of the Young.

At hatching time, the females begin an incessant “kukking” call. When the young are dry, the female may encourage their departure from the nest by leaving the nest herself and then calling. Young ducks in tree holes will jump from any height to this call. The broods remain intact until the young can fly, that is, for about 5 to 9 weeks, depending on the species. Predation, storms, and straying accounts for losses of 1/3 to 1/2 of the ducks in a brood before they attain flight.

Following one or more nesting attempts, the female may be thin and ragged, and some can hardly fly. A differential sex ratio among adult ducks implies that female ducks suffer high mortality during the nesting period. Singly or in groups, they shed their flight feather and develop their winter plumage.

In the colder climates the males usually do not help care for the young but desert the female as soon as the clutch is complete. Many move hundreds of miles to lakes where they molt into their dull eclipse plumage and become flightless. In the tropics, the males more often remain with the females and brood. 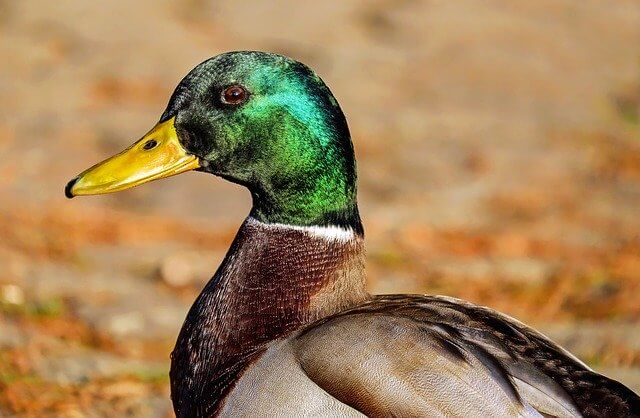 Ducks are raised commercially for meat and eggs. A few species, such as the silver-crested duck, are also raised as ornamental species. The domesticated breeds are derived from two wild species: the mallard of the Northern Hemisphere and the Muscovy of South America. Muscovies are used on a small scale, but they have limited egg production. Most commercial varieties are derived from mallard stock. The varieties may be three times the size of the wild birds and of many colors.

White varieties are preferred for meat production. The White Pekin is favored in North America, especially on Long Island where 60% of the ducks raised in the United States are produced. White Pekins reach a market weight of 7 pounds in 8 weeks. Most are marketed as ducklings at 7 to 8 weeks of age. Another variety, the White Aylesbury, is favored in England where it was developed, but it has low egg production.

Most commercial egg producers use the khaki-colored Campbell ducks, which have produced averages of 365 eggs per year (chickens rarely reach 300 eggs a year). Duck eggs are artificially incubated. Muscovies have an incubation period of 35 days, while mallards require only 28 days.

Domesticated ducks are fed diets rich in protein. They may also be given antibiotics, since diseases can cause heavy losses in large commercial operations. Botulism, caused by the bacterium Clostridium botulinum, and fowl cholera, caused by Pasturella bacteria, are diseases that may result when sanitation is poor. Virus hepatitis is another serious disease of ducks, but vaccine that reduces mortality is now available.