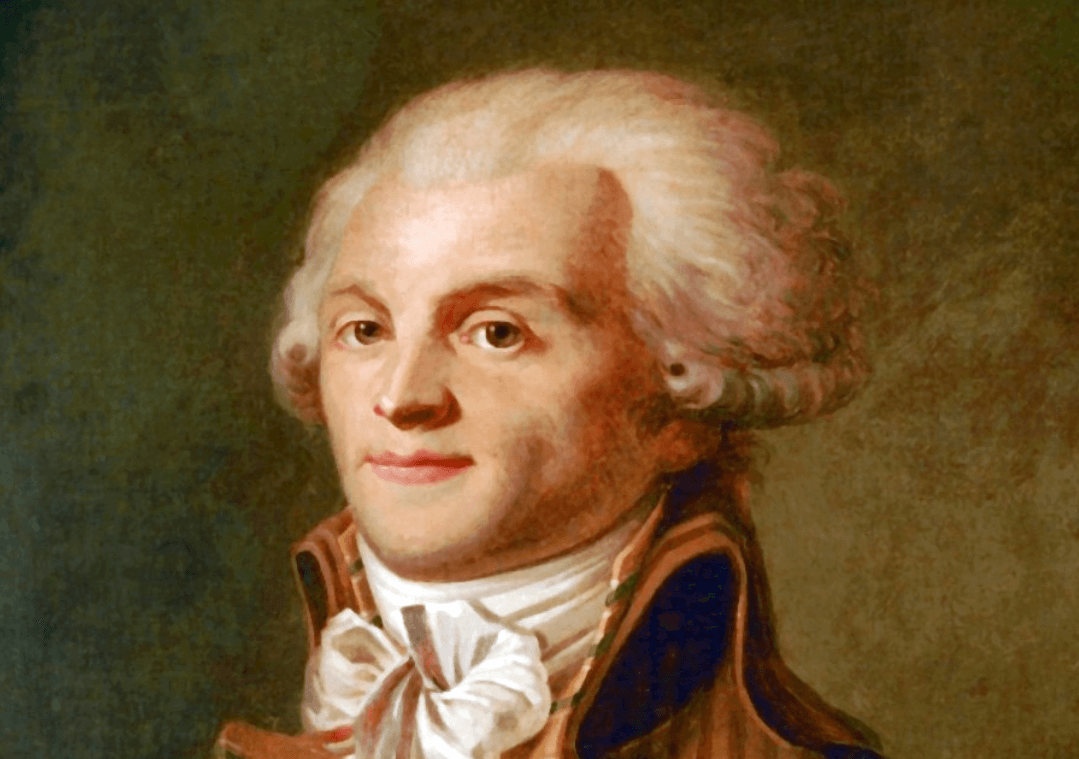 Maximilien de Robespierre; French revolutionist: b. Arras, France, May 6, 1758; d. Paris, July 28, 1794. Robespierre was the son of a lawyer. Orphaned in childhood, he was brought up by his grandfather and went to school in his native town. In 1770 he entered the Collège Louis-le-Grand, more or less comparable to the American high school, in Paris on a scholarship given him by the bishop of Artois, and later studied law and was admitted to legal practice. He returned to Arras in 1781 and established his practice there.

Solid rather than brilliant, he soon was known as a skillful lawyer and a man of unimpeachable integrity. With growing success he gave much of his time to the dilettante pursuit of literature, wrote essays in competition for prizes offered by the provincial academies, and was a prominent member of the Rosati, a society devoted to the cultivation of wit and letters. He was an ardent student of Jean Jacques Rousseau and a fanatical believer in his teachings. Indeed, Robespierre’s unwavering belief in the possibility of realizing Rousseau’s ideal society explains, in large measure, his course in the days when he stood forth as the greatest figure in France. It is the secret of his temporary power.

In the events leading up to the election of the States-General, Robespierre appeared prominently as the champion of the liberal views then widespread in the French middle class. He was elected fifth deputy to the States-General from Artois and allied himself with the radical faction in that body. He spoke frequently in the Constituent Assembly, and always in the spirit of that equality which he believed was now at length to be established in France. Of small stature and by no means in robust health, weak-voiced and pale-eyed, he did not impress himself on the mass of the assembly, but those who came into personal contact with him were won over by his tremendous sincerity. Mirabeau said of him : “That young man believes what he says ; he will go far.”

Robespierre’s great strength, however, was in the Jacobin Club, where his polished, classical declamations gained him the ardent support of those members who had been recruited from among the working classes and the small bourgeoisie of Paris. His power in the club became absolute when the more conservative members seceded in 1791, after the radical faction, under his inspiration, had prepared the petition for the deposition of Louis XVI, which led to the massacres in the Champ de Mars (Parade Ground) on July 17. His popularity was demonstrated on the day of the dissolution of the National Assembly, Sept. 30, 1791, when he and Jéróme Pétion de Villeneuve were drawn in triumph through the streets of Paris and were crowned as “incorruptible Patriots” by the people.

In accordance with his own motion, adopted in May 1791, prohibiting members of the Constituent Assembly from sitting in the succeeding Legislative Assembly, Robespierre took no direct part in the sessions of that body, but he continued to wield great influence over its deliberations through his power in the Jacobins. In February 1792 he became public prosecutor at Paris, but resigned the office in April on account of the virulent attacks of the Girondists (the more conservative wing of the revolutionaries), who regarded him with special hatred because of his opposition to their favorite policy of war against Austria. Robespierre’s opposition to the war was based on humanitarian grounds. He was, besides, more a man of theories than of action—which would explain his small part in the uprisings of June 20 and August 10. Under the guidance of Georges Jacques Danton, these effected what Robespierre was pleased to see consummated, the overthrow of the Bourbon monarchy. Shortly after the storming of the Tuileries, Robespierre became a member of the Paris Commune; his personal popularity lent strength to that body, but his inability to prevent the prison massacres of September showed that his power was by no means absolute in the ranks of the radical party.

In the Convention, to which he was elected as the first deputy from Paris, Robespierre became the leader of the Mountain, the radical wing of the revolutionaries. The Girondists turned the full force of their eloquence against him and accused him of aiming at the dictatorship. In the crisis which attended the trial of Louis XVI, Robespierre for once assumed a firm and definite line of action. He pleaded for the death of the king and by so doing gained over to his side the party of Danton, Lazare Carnot, and Jean Nicolas Billaud-Varenne, who were disgusted by the temporizing policy of the Girondists at a time when France was in imminent danger of foreign invasion and needed a strong government to make headway against her enemies. The condemnation of Louis XVI was a triumph for Robespierre, who, however, did not cease from his attacks on the Girondists. The struggle became one of life and death. In April, Robespierre denounced them in the body of the Convention, and on the fateful days of May 31 and June 2 the destruction of the party was accomplished with the aid of the Parisian mob.

In July 1793, Robespierre was made a member of the Committee of Public Safety, which for a year was to be the virtual ruler of France. To curb dissension at home, so as to present a united front to the foreign foes of the country, the committee organized the Terror, with which the name of Robespierre has become, through legend, synonymous. To the world at large Robespierre appeared the master of the committee and the ruler of France. As a matter of fact, his power was in no way absolute. Of the 12 members of the committee, the majority were quite opposed to his Rousseauist ideals, and only two of the 12, Georges Couthon and Louis Antoine Léon de Saint-Just, were professed followers of Robespierre. The rest of the committee were practical men of affairs, like Carnot, Billaud-Varenne, and Jean Marie Collot d’Herbois, upon whose shoulders fell the real task of government. Robespierre’s services to the committee were such as his immense popularity and spotless reputation could render it. He was the apologist for the committee in the Convention and before the people, but he differed from his associates entirely in so far as the motives of his actions were concerned. While the Terror to them was but a thorough, though possibly radical, means for establishing peace within the country, Robespierre saw in it an effective instrument for bringing about the erection of Rousseau’s ideal state, since death would wipe out all who opposed his favorite theories. He first turned against Jacques René Hébert and his followers in the Paris Commune, who had aroused his enmity by their uncompromising democracy, which led them to ridiculous excesses. Moreover, he disapproved of their professed atheism, which attained its climax in the establishment of the worship of the Goddess of Reason by Pierre Gaspard Chaumette.

The Hébertists were brought to the scaffold on March 24; 1794. They were followed on April 5 by Danton, Camille Desmoulins, and their followers. On April 13 came the turn of Chaumette. Danton fell because he had begun to advocate a moderation of the Terror and thereby had incurred the enmity both of the men of action on the Committee of Safety and of Robespierre, to all of whom the continuance of the Terror seemed essential. To hasten the work, Robespierre caused the infamous law of 22 Prairial (June 10) to be proposed by Couthon, which freed the revolutionary tribunal from all restrictions of legal procedure. The tribunal, thus “improved,” sent nearly 1,300 persons to the scaffold between June 12 and July 28, 1794.

On June 8 Robespierre attained the zenith of his career, when, as president of the Convention, he celebrated with great pomp the Feast of the Supreme Being, whose existence had been formally admitted by the Convention in the preceding month. His fall followed speedily. The men on the Committee of Safety, who had suffered his official leadership as long as he was content to remain largely a figurehead, turned upon him when he began seriously to assert mastery over the committee. Besides, it became apparent that the excesses of the Terror could not go on and that reparation would be demanded Accordingly Robespierre was chosen as the scapegoat of the committee. The attack on Robespierre began June 17, when Marc Guillaume Albert Vadier, a member of the Committee of General Security, satirized him before the convention. Instead of. joining battle, as he was urged to do, Robespierre went into retirement for more than a month to prepare his defense. On July 26, he appeared in the Convention and declared that the Terror should cease and that the committees of Public Safety and General Security should be reorganized. Ominous threats appeared in his oration, which for a time held the Convention terror stricken and caused it to vote his proposal. Quickly, however, he was assailed by various orators, and the Convention reconsidered its action. In the session of the following day, July 27, the fateful 9th Thermidor, the intrigues of his associates on the committee, the fear of his intended victims, and the resentment of the Dantonists, who had not forgotten the death of their leader, combined to bring about Robespierre’s downfall. Orders were issued for his arrest and for that of Louis de Saint-Just, Georges Couthon, Philippe Lebas, and his younger brother Augustin Robespierre.

Rescued by the national guards under François Hanriot and brought to the Hôtel de Ville, Robespierre showed no capacity for action. The Convention placed him outside the law and dispatched a portion of the national guard under Paul Nicolas de Barras against him. In the assault Robespierre was shot in the jaw by a gendarme and taken in a pitiful condition to prison. On the following day he was brought before the revolutionary tribunal and with Couthon, Saint-Just, and others of his followers was sent to the guillotine.

Inasmuch as Robespierre has become the popular symbol of the violence of the French Revolution, it has been difficult to see him in his proper perspective. Thomas Carlyle’s portrait of him in his French Revolution (1837), for example, is notoriously unfair. Robespierre’s fanatic idealism, for which he deemed any sacrifice justified, combined with his unquestioned honesty, gave him a power which his gifts as a statesman— above all his hesitation in crises—did not warrant.