What is jaundice? What kind of disease is jaundice? Information about the symptoms, causes and treatment of jaundice.

Jaundice; is a condition in which the skin and eyes become yellowish in color. Jaundice, also known as icterus, is not a disease but is usually a harmless sympton of an underlying disorder. It results when there is an abnormal accumulation of a yellow pigment, called bilirubin, in the blood. Bilirubin is formed continuously as an end product in the normal breakdown of red blood cells.

In all healthy people the red blood cells wear out after circulating in the bloodstream for about 120 days. They are then destroyed by certain cells throughout the body and their red pigment hemoglobin is released and converted into bilirubin.

The bilirubin then travels through the bloodstream to the liver, which is the only organ of the body capable of removing it from the blood. In the liver, the bilirubin is taken into the liver cells. Next, it is combined with another chemical substance (glucuronic acid) to make it water-soluble so that it will dissolve in bile, the yellowish-orange fluid secreted by the liver. The bilinibin is then released from the liver cells into the bile, and with the bile it passes through the bile ducts into the intestine. The bilirubin then becomes mixed with the food masses in the intestine and finally it is excreted in the feces. In fact, it is the bilirubin that gives the feces their characteristic brown color. 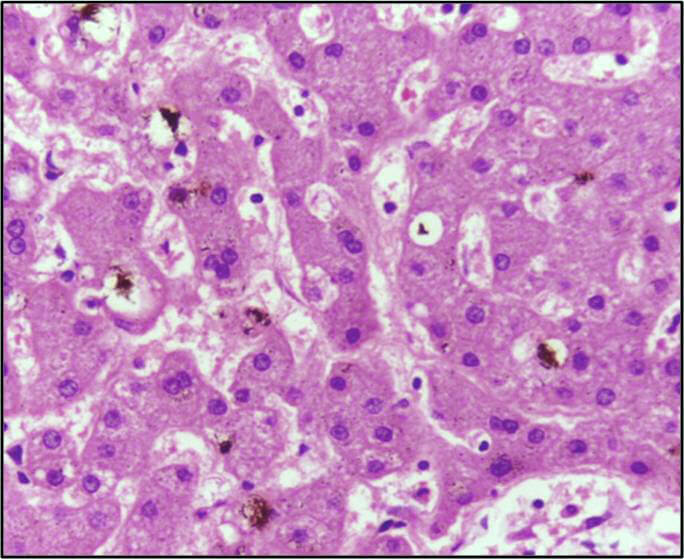 There are four major conditions that may result in an abnormal accumulation of bilirubin in the blood. Sometimes it results from an increase in the breakdown of red blood cells. One type of jaundice caused by an unusually rapid rate of red cell destruction is hemolytic jaundice. This mild form of jaundice is often found in persons with sickle cell anemia or other inherited disorders of the red blood cells. A similar type of jaundice occurs commonly in newborn infants with erythroblastosis fetalis, a disorder in which antibodies from the mother’s bloodstream enter the infant’s blood and destroy its red blood cells. This type of jaundice is extremely dangerous to life, especially in premature infants. Although bilirubin is harmless in adults, in infants it may destroy parts of the brain. The best method of treating this type of jaundice consists of replacing the infant’s blood with normal blood, a procedure known as exchange transfusion.

A third cause of jaundice is an impairment of the excretion of bilirubin from the liver cells into the bile. This form of jaundice, which is known as liver jaundice, results when the liver cells are damaged, as in hepatitis and other liver diseases. Usually, liver jaundice is accompanied by nausea and weight loss, and its treatment is based on the treatment of the underlying liver disease.