Information about the Sumerian earth and air God Enlil, myth, story and facts. The role of Enlil in the Sumerian Mythology. 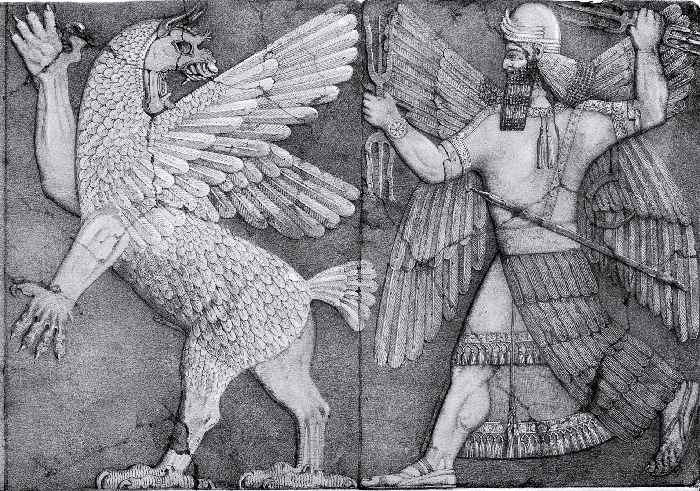 Enlil; The Sumerian god of the earth and the air. At the beginning the primeval waters generated a cosmic mountain, which consisted of heaven and earth. From this union of heaven, personified by the god An, and earth, as the goddess Ki, sprang Enlil, the air god, who separated his parents and united with his mother to beget mankind. His chief gift to men was the pickaxe, an implement designed to assist in the construction of cities induding his own seat of Nippur. The primeval waters, Nammu, were called ‘the mother’ and may have been synonymous with Abzu, the sweet waters in the earth, or perhaps they represented the marshlands at the mouth of the Euphrates and of the Tigris, where new land was being constantly created by riverine deposits.

A myth concerned with the birth of the moon god tells how Enlil was banished to the nether world for raping the goddess Ninlil, but she decided to follow him in order to give birth in his presence. The banished gad somehow managed the escape of their child, Nanna, the moon god, so that he could become the light of the night sky. Yet fragments surviving of a flood myth indicate an even more violent side to Enlil, since as the devastating wind god he was probably the author of the disaster. Only pious King Ziusudra escaped in a boat, which he built on the instruction of the water god Enki. To this ruler of Sippar, ‘the seed of mankind’, was granted ‘the breath of eternal life’.

In Babylonian mythology Enlil kept his name, or was known as Ellil, though he acquired the Akkadian epithet of Bel, ‘the lord’. Disturbed by the racket of mankind, he sent to earth a plague, then a drought, and at last a deluge. But Ea warned Atrahasis, ‘the very wise one’, who saved himself in the ship Preserver of Life. In The Gilgamesh Epic, the other Babylonian treatment of the flood, it was Utanapishtim that Ea warned and the decision to destroy life was taken by the gods, not Enlil alone. Other legends underscore his ambivalent attirude towards men, too. Enlil created the monster Labbu, or Lahmu, ‘the raging one’, to wreak havoc on earth: it descended from the primeval chaos, being the offspring of, Abzu and Tiamat. On the positive side, he held the ‘tablets of destiny’, tupsimati, by whose authority he ordered the nature of things. In the second millennium BC on the pillar recording his own code of laws Hammurabi, King of Babylon, invoked wrathful Enlil against the disobedient.