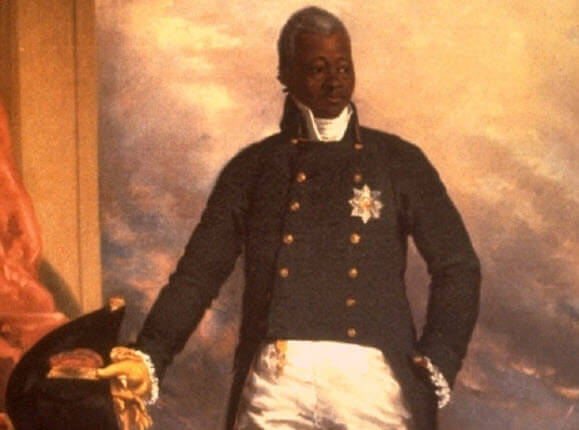 Henry Christophe was a key leader in the Haitian Revolution and the only monarch of the Kingdom of Haiti.

Henri Christophe (born on 6 October 1767 – died on 8 October 1820), Haitian king, who was a leader in the struggle for independence against France. A liberated slave, born in Grenada, in the British West Indies, on Oct. 6, 1767, he joined the anti slavery rebellion in Haiti at its outset in 1791 and became an intrepid fighter for independence. His valor attracted the attention of the leader of the struggle, Toussaint L’Ouverture, who made him one of his commanders.

After the French captured Toussaint in 1802, Christophe served as a general under Jean Jacques Dessalines. In 1806 he participated in the conspiracy against his leader and gained control over the northern portion of the country. Thereafter he engaged in an inconclusive conflict with Alexandre Petion, who controlled the Southern region. Although in possession of only part of the country, Christophe proclaimed himself Henri I, King of Haiti, in 1811. He ruled until Oct. 8, 1820, when, during a period of revolt and while suffering from partial paralysis, he committed suicide, allegedly using a silver bullet.

An archdisciplinarian, Christophe required all able-bodied men to work in the fields, thereby reviving the coffee and sugar economy and adding considerable wealth to his treasury. An admirer of the court of Louis XIV, he instituted elaborate protocol and noble titles. To satisfy his love of the grandiose he had constructed the citadel at La Ferriere and his palace of Şans Souci at Cap-Haitien, the Capital. Although uneducated, he surrounded himself with scholars from abroad. He built schools, encouraged the theater, established newspapers,. and proclaimed a body of laws, the Code Henri.