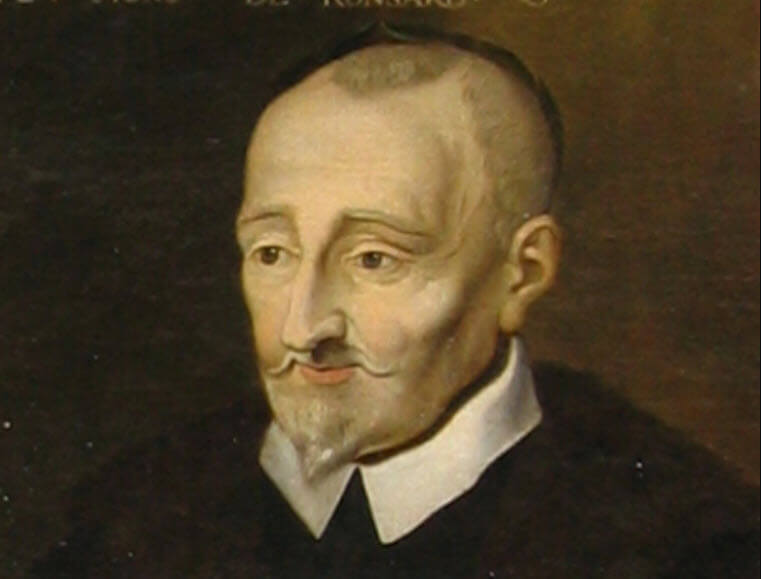 Pierre de Ronsard; (1524-1585), French poet, who was a leader of the Pléiade, a group of Renaissance poets who abandoned medieval forms to establish French poetry on classical models. Of a noble family, Ronsard was born at the Château de la Possonnière, near Vendôme, on Sept. 11, 1524. He studied briefly at the Collège de Navarre and became a page at court. In this capacity he visited Scotland in the suites of Madeleine and Mary of Guise, the French queens of Scotland’s James V. Before returning to France in 1539 he spent some time m London, where he gained favor with Elizabeth I. Ronsard subsequently performed diplomatic missions, but growing deafness forced him to withdraw from public life in the early 1540’s, and he turned to poetry. He died at the priory of St.-Cosme, near Tours, in December 1585.

From about 1541 to 1546, Ronsard studied at the Collège de Coqueret with the humanist Jean Dorat. The circle that formed around Dorat—the poets Joachim du Bellay, Antoine de Baïf, Rémy Belleau, Étienne Jodelle, Pontus de Tyard, and Ronsard—became known as the Pléiade. They began a new age in poetry, using as their sources and models the classics of ancient Greece and Rome rather than the medieval French forms and subjects or the Italian works of Petrarch and his followers. Convinced that French poetry was capable of its own perfection, balance, clarity, and harmony, the Pléiade strove to create a literature that, though it used classical models, was French in all other respects.

Among Ronsard’s Odes (1550-1556), those that follow the formal structure and diction of Pindar lack naturalness. Those using Anacreon or Horace as models have typical epicurean themes—the brevity of life or the pleasures of the moment—but are endowed with the precision and persuasion of familiar and personal imagery. Les Amours (1552-1555), which is Petrarchan in inspiration, and Les Amours de Cassandre ( 1552 ) have a grace of movement and the delicacy and passion of genuine love that are not inhibited by their unusual imagery, their inflated analogies with Troy, or their Platonic aspirations.

Les Hymnes ( 1555-1556 ) and Les Discours ( 1560-1563 ) are eloquent apologies for Roman Catholicism. They made Ronsard the favorite poet of King Charles IX. La Franciade, written at Charles’ behest, was left incomplete at the king’s death in 1574. An epic in imitation of Vergil, it was Ronsard’s attempt to give France a national myth in the story of the founding of Paris by Francis, who had escaped from the Trojan War. The four completed books of the poem were published in 1572.

Of the three great themes of Ronsard’s poetry —love, war, and truth—the one he handled with the greatest felicity was love. This was especially true of Les Amours de Marie ( 1555 ), an early work, and of Sonnets pour Hélène (1578), a late one.