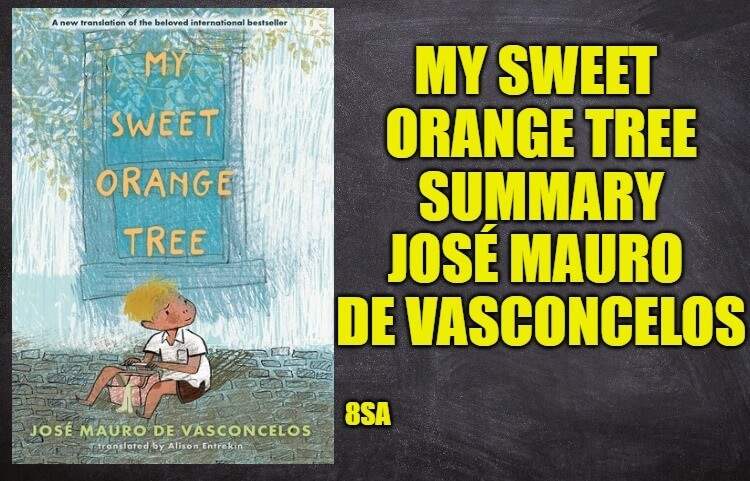 My Sweet Orange Tree is a novel by José Mauro de Vasconcelos, one of the most widely read in new Brazilian literature. The author continues the story in Let’s Heat the Sun. It is narrated in the first person and has a very high autobiographical level.

It topped the bestseller list in 1968, the year of its first edition. The novel was subsequently translated into 32 languages and published in 19 countries. It has been adopted as a reading text at the elementary level.

Three telenovelas have been made based on this work: in 1970 for Rede Tupi, and in 1980 and 1998 for Rede Bandeirantes. There have also been several adaptations to film, television and theater, the first being directed by Aurelio Teixeira for the cinema in 1970. In 2011 its second film version was presented.

Zeze, the five-year-old son of a poor family, is a child who annoys the whole neighborhood with his mischief. Everyone tells him that he is “the godson of the devil.” In addition to being mischievous, Zeze is a child with a wide imagination, smart enough to learn to read on her own, and emotional enough to bring a flower to her teacher every day to make her happy. Zeze, who started school at a very young age, becomes a good and hardworking student at school, but continues to misbehave on the street. Only her older sister and teacher are sympathetic to her mischief.

Unhappy when her family has to move to a new neighborhood, Zeze befriends a sugar orange sapling in the garden of their new home. He talks to the sugar orange sapling, which he calls Minguinho, and on the days when he is pleasant, he calls him Xururuca. Zeze tells the sapling what she has done throughout the day and her dreams.

When Christmas approaches, Zeze puts her shoes in front of the door in anticipation of presents, but her father, who is an unemployed and very poor man, cannot afford to buy her a present. When he realizes how this has upset his father, he regrets it. To make up for what he did by buying a gift for his father, he hits the road to shine shoes and manages to earn enough money to buy filter cigarettes and give his father a gift.

One of Zeze’s mischiefs is to hang on the back of the most beautiful and coolest car in town. He fails on his first try and is beaten by the owner of the car, Portuguese Manuel Valaderes. After that it is hidden from the Portuguese Manuel. But one day, Portuguese Manuel, who saw that he was limping to school because he was injured as a result of his mischief, took him in his car and took him to the pharmacy; Then they buy him lemonade and cake. Thus, a friendship develops between Zeze and the Portuguese and they spend time together all the time. Zeze sees him as his father.

When Zeze meets a street singer

When Zeze meets a street singer, Mr. Arivaldo, she starts singing in the streets next to him. Zeze’s father forbids her from meeting Mr. Arivaldo because he thinks the lyrics are obscene (vulgar). When Zeze decides to sing for her father one day and sings a song she learned from Mr. Arivaldo, her father beats her with a belt. After this beating, Zeze says that she no longer wants to be the son of her father, but of the Portuguese.

Zeze, who is constantly beaten by her family for her misbehavior, is heavily beaten by her father and older sister one day, and she cannot leave the house. Zeze suffered so much that she wanted to die in that process. When he recovers and meets with the Portuguese, he reveals this thought to him, but the Portuguese discourages him from this thought.

Zeze gets the news that the Portuguese had an accident while she was at school one day and throws herself on the street. The news of this accident destroys Zeze’s whole joy of life. Portuguese Manuel is dead. Meanwhile, rumor has it that the sugar orange sapling in the garden will be cut down due to road construction work. Zeze cannot bear these overlapping pains and falls ill. The townspeople come to visit Zeze, who cannot recover. But he only talks to the sugar orange sapling. In time, Zeze gets better, and her father finds a job. But Zeze’s childhood is dead, her heart never heals