The Feudalism is the system of government of medieval Europe between the ninth and fifteenth centuries. It was based on the system of vassalage, which consisted of a compromise between two men, one of whom was in a position of social superiority (the lord, belonging to the nobility), while the other (vassal) was completely subordinate to the will of the first.

By virtue of this compromise, the lord granted the vassal a fiefdom, which was generally a portion of land plus the peasants needed to cultivate it. With the income from the sale of crops, the vassal covered all his needs.

The delivery of the land meant, among other things, that the vassal and his peasants would have the protection of the feudal lord, due to the great insecurity that reigned thanks to the numerous invasions that Europe experienced at the time (of the Germanic peoples, Vikings , Muslims, Magyars, etc.).

In return, the vassal would pay the lord a part of the fief’s crops and promised to take up arms and fight alongside his lord when he required it. 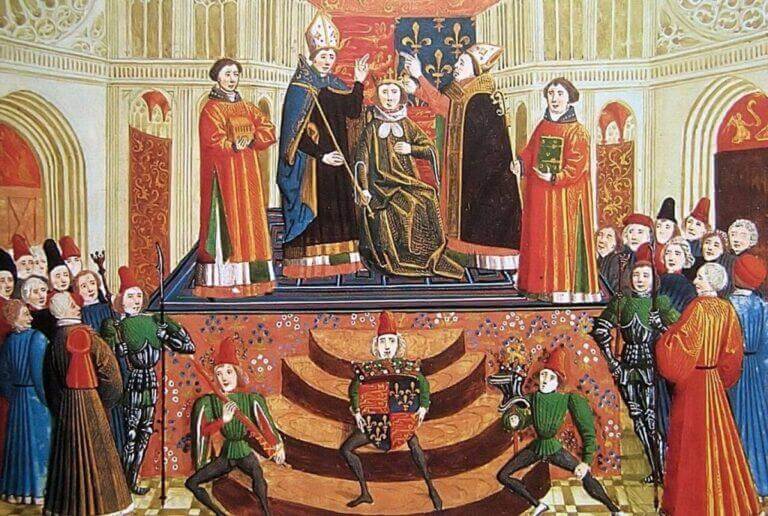 Feudalism was the political, social and economic system that flourished in Europe between the 9th and 15th centuries.

Feudalism was born in the 9th century and developed in much of Western Europe: France, Italy, Germany, England, Austria, the Czech Republic and Belgium, mainly.

It was a way of reestablishing social and political order at the fall of the Carolingian Empire , which had kept European territories under relative unity since the fifth century.

Indeed, with the death of Charlemagne, in 814, the empire began to fragment into small political units and the small local lords acquired more and more power.

With the absence of an imperial power and the non-existence of public authority, the population found itself in the situation of swearing loyalty to the local lord, who now wielded the only effective power, in exchange for sustenance and protection.

1- The feudal system is built on two basic institutions:

In addition to the fiefdom, a faithful vassal and his family could obtain other benefits, such as high office, dignity or cash income.

2- The State as it was known before and after feudalism did not exist. The fiefdoms were the private property of the feudal lords, and they unilaterally exercised judicial and administrative functions in their respective territories.

4- Feudal society was characterized by a deep development of personal dependency ties.

The nobility was formed, first, by kings and emperors, and then there were all the feudal lords, who held noble titles (dukes, marquises, counts, etc.).

They were the owners of the land and the only ones who used weapons, which made them a kind of professional military elite. They held all administrative positions.

They occupied the midpoint of the social pyramid of feudalism. Although they were subject to the authority of the feudal lord, they were not without a certain prestige. They were knights, that is, they performed military service on horseback. They had under their command the peasants.

To become a vassal, it was necessary to perform a solemn ritual called homage. This was held in a place specifically designed for the occasion: the keep, in the castle of the feudal lord.

There, before sacred relics, the would-be vassal, kneeling, swore allegiance by pronouncing these words: “I make myself your man”, which he accompanied with the gestures encoded for this purpose. The feudal lord expressed his acceptance with a handshake and, to conclude the ritual, gave the vassal a kiss.

It was formed by the authorities of the Catholic Church, and was divided into high clergy (bishops, archbishops and abbots) and low clergy (monks and priests).

Like the nobility, the church owned arable land and peasants who worked it.

Also called serfs, they formed the base of the feudal social pyramid. They were in charge of sowing and harvesting in the fiefdoms. They were not free to pursue other work or emigrate to the castle of another feudal lord.

There were two types of servants: the ministerial, who carried out domestic work, and the gleba, dedicated to agricultural work.

Economy and trade in feudalism

Feudalism was a period of economic stagnation. Urban development slowed and, as the main trade routes passed from Christian to Muslim hands, this other aspect of the economy also suffered a significant decline.

The land was then left as a source of wealth. That is why the feudal economy was characterized by being for the most part agricultural. The main crops were cereals.

The cultivation techniques used were the same as in the times of the Roman Empire. The feudal lords had no need to invest in technological improvements, since the economy was autarkic, that is, only what was necessary to survive was produced, and the European population only began to increase at the end of the feudal period.

However, from the thirteenth century there began to be more surpluses in production, which helped establish trade beyond the limits of the fiefdoms.

This activity allowed the emergence of a new social class, an incipient bourgeoisie made up of merchants, who also paid part of their profits to the feudal lord.

The feudal lords, for their part, increased their coffers with the work of the peasants and that of the merchants. The routes for trade were the same pilgrimage routes, whose main destinations were Santiago de Compostela, Rome or Jerusalem.

But the nearby towns and those that were along the routes benefited, so they began to grow and flourish in various ways. These small cities on the access roads to pilgrimage destinations were called burgos, which functioned both as defense centers and commercial centers.

In these boroughs that new social class would be generated that would eventually unseat the monarchy: the bourgeoisie.

The feudal system began to weaken in the 12th century, but it would still persist in many European countries until the 14th century. There are several reasons that explain the fall of feudalism; Among the main ones we have:

Through these military movements in the direction of the East, Christian Europe regained control of some important trade routes, which reactivated this economic activity and re-impelled the development of the cities.

The bubonic plague or black plague

It was the most devastating epidemic ever to take place in Europe; it killed about a third of the continent’s population. Most of the dead were peasants, which hit the agrarian economy hard.

Rise of the bourgeoisie

It was a new social class that emerged in the cities. The bourgeoisie had little contact with the rural world; Its wealth came from finances, skilled crafts (goldsmithing, blacksmithing, textiles) and intercontinental trade.

The rising power of kings

The rich bourgeoisie turned their backs on the feudal lords and sought alliances with the kings. These, thanks to bourgeois financing, accumulated power and imposed themselves on the local lords.