What are the characteristics of fern plant? Information about the kinds, origin, history, structure, reproduction and life cycle of fern.

FERN, a green plant that typically grows in soil or on trees, has large leaves, and reproduces by microscopic spores rather than by flowers and seeds. The roots, stems and leaves of ferns, like those of flowering plants, have specialized cells that conduct water and nutrients throughout the plant. Algae, mosses, liverworts, lichens, and fungi lack such cells.

Several kinds of plants thought by many to be ferns are not ferns. For example, asparagus fern, which is used in flower arrangements, is the inedible flowering shoot of asparagus. Resurrection fern, which curls into a ball when dry and uncurls when watered, is a kind of spike moss. Spike mosses, together with whisk plants, club mosses, and horsetails, were once placed in the same division as ferns, and even today are sometimes referred to as “fern allies.” Although the so-called fern allies resemble ferns in that they produce spores and have specialized conducting cells, it is now known that they are not closely allied to true ferns. 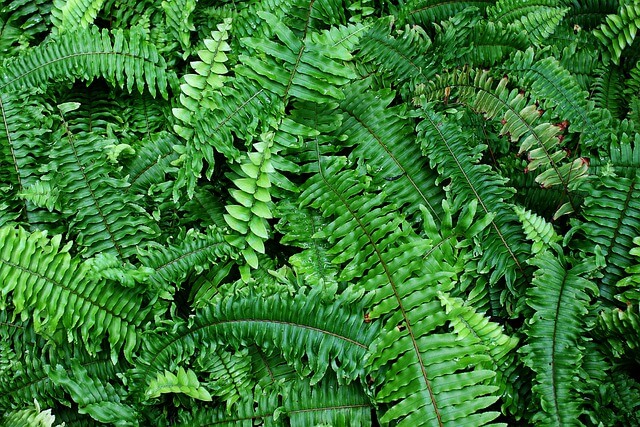 Although ferns lack the spectacular colors found in flowering plants, they are often cultivated both indoors and outdoors for their beautiful leaves. In fact, they have few uses other than as ornamentals.

Ferns are very widely distributed. They grow in almost every land area of the world except those areas covered by permanent ice. Almost three-quarters of the approximately 10,000 species of ferns grow in the tropical, subtropical, and montane rain forests that cover much of the earth close to the equator.

Ferns range in size from less than an inch (2.5 cm) to over 80 feet (24 meters) tall. Some ferns look somewhat like palm trees. A few aquatic species that are less than a quarter inch (0.6 cm) in diameter might easily be mistaken for small flowering plants or even algae.

Fern leaves may be of various sizes and shapes. The immature leaves are small and tightly curled. They are often called “fiddle-heads.” As they uncurl they continue to grow, not only by cell enlargement as is common in the maturing leaves of many flowering plants, but »also by cell division. The leaves of most ferns arise from rhizomes, which are usually more or less horizontal stems that grow underground. Some arise from creeping stems or runners. Adventitious roots that grow out of the rhizome or runner near each leaf base hold the plant in or on soil, rock, or another plant. The roots are called “adventitious” because they arise from the stem rather than directly or indirectly from an embryonic root (hypocotyl).

The ferns ordinarily seen are called “sporophytes,” because they bear spores. The spores are borne in spore cases (sporangia) that usually occur in round or elongate clusters called “sori.” The sori are located on the undersides of some leaves of mature sporophyte plants. When the spores are shed and germinate in a suitable place, they develop into pad-, lump-, or filament-shaped gametophytes that are usually less than 0.25 inch (0.6 cm) long. Because they are so small, most people are unaware of their existence. The gametophytes produce microscopically small sex organs, antheridia (male) and archegonia (female), and like the pollen and ovaries of the flowering plants reproduce by means of sex cells or gametes (sperms and eggs). Fertilization of an egg results in a zygote that forms a new sporophyte fern plant.

Ferns are cultivated outdoors, as houseplants, and in greenhouses. Successful cultivation of ferns is often a matter of duplicating their natural conditions of light, temperature, and humidity as well as providing them with suitable soil and adequate water and fertilizer.

Most ferns that are hardy outdoors do well in moist, shady places. Most of those grown indoors also thrive in moderate light if given adequate water. Greenhouse species, including many epiphytes, also require high humidity; abundant growth probably also depends upon warm temperatures.

Most ferns are rooted in soil. The epiphytes are usually rooted in osmunda fiber, fir bark, or sifted sphagnum moss, although the less delicate epiphytes may be rooted in soil. Most potting mixtures combine four parts by volume of mineral substances such as perlite, white sand, or small silica pebbles, to two or three parts of humus materials such as sieved sphagnum moss, fir bark, peat moss, or leaf mold. Some ferns prefer an acid soil. Soil acidity can be increased with superphosphate or decreased with ground limestone or bonemeal for ferns that prefer a less acid or a neutral or alkaline soil.

Actively growing ferns can be given a low-burn powder fertilizer or a liquid fertilizer. It is particularly important to fertilize potted plants, which are confined to soil that is drained of nutrients by frequent watering.

Ferns are easily propagated by rhizome division, plantlets taken from the leaves, or by raising new plants from spores.

The living ferns, estimated at 10,000 species, are classified by characteristics such as external structure; habit; vascular system; scale, gland and hair structure; the position, structure, and protection of the sori; sporangium development; spore structure and number; and chromosome number. Ferns make up the division of plants called Polypodiophyta (sometimes called Filicophyta). The only class in the division is Polypodiatae (also known as Filicopsida). There are 9 subclasses of ferns, 3 of which are made up entirely of fossil ferns. The other 6 subclasses encompass 19 orders. Only the most important of these orders are listed below. Among the orders, the Ophioglossales and Marattiales have large sporangia that are several layers of cells thick and contain large numbers of spores. Ferns in all the other orders have sporangia with a single layer of cells and (except for the Osmundales) contain a definite, small number of spores, usually 64. Osmundales’ sporangia contain up to 500 spores. Marsileales and Salviniales, unlike other ferns, bear spores and gametophytes each of two sizes.

Order Ophioglossales. About 65 species in 3 genera. Most are terrestrial in temperate habitats. Small ferns with one simple or compound leaf having sterile and fertile portions. The principal genera are Ophioglossum (adder’s-tongue) and Botrychium (grape fern). 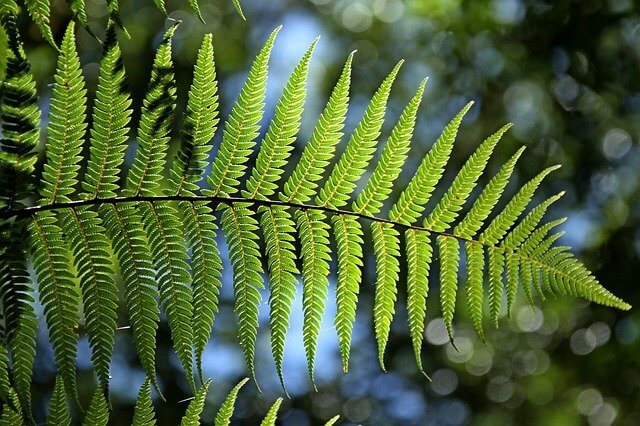 Order Salviniales. About 20 species in 2 genera. Floating plants consisting of tiny leaves arranged in 2 or 3 rows around filamentous stems. The principal genera are Azolla (mosquito fern) and Salvinia (water spangles).

Order Schizaeales. About 815 species in 58 genera. The sori of most are marginal or nearly so with many sporangia and have a false indusium formed by the fertile leaf margin. The families Adiantaceae and Schizaeaceae are mostly small, coarse, tropical dwellers of rock or sand in dry regions and epiphytic or terrestrial in wet areas. The Parkeriaceae contains fleshy, tropical aquatic ferns with broad sterile and divided fertile leaves. The principal genera of Adiantaceae are Adiantum (maidenhair), Cheilanthes (lip fern), and Vittaria (shoestring fern). The principal genera of the Schizaeaceae are Anemia, Lygodium (climbing fern), and Schizaea (curly grass). The principal genus of the Parkeriaceae is Ceratopteris (water fern).

Order Polypodiales. About 8,000 species in 140 genera. The number and relationships of its families are widely debated. Indusia, if present, are not marginal outgrowths. The sporangia are many per sorus or are not arranged in sori. Several of the rare, tropical families contain only 1 or 2 genera and 1 to fewer than 50 species. Only the larger families are included below.

Family Hymenophyllaceae. Mostly tropical and terrestrial or epiphytic, with leaves only one cell thick and marginal sori protected by a two-lipped or a tubular indusium. The principal genera are Hymenophyllum and Trichomanes (both called “filmy fern”).

Family Aspleniaceae. Terrestrial and epiphytic in the tropics and temperate regions. Most are medium-sized with compound leaves and dorsal, round, or elongate sori, usually protected by a round, kidney-shaped, or elongate indusium. The principal genera are Athyrium (lady fern), Asplenium (spleenwort), Ctenitis, Diplazium, Dryopteris (wood fern), Polystichum (holly fern), and Thelypteris. 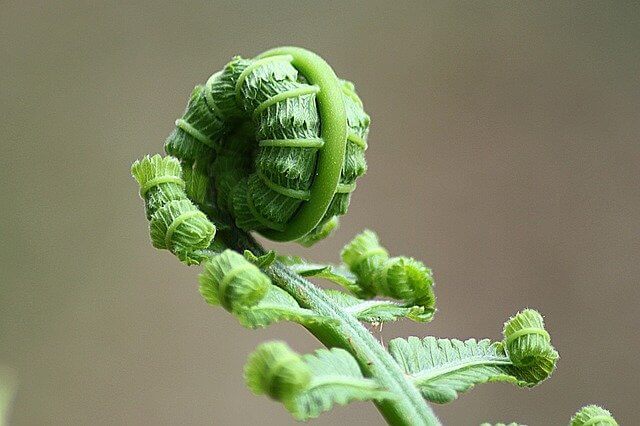 Family Blechnaceae. Terrestrial or epiphytic, mostly tropical, with elongate sori on each side of the leaflet midrib. The sori are protected by a flaplike indusia. The leaves usually divided once or twice. The principal genera are Blechnum and Woodioardia (chain fern).

Family Polypodiaceae. Largely tropical or subtropical epiphytes with small to medium-sized simple to singly divided leaves that detach from the stem at an obvious joint. The sori are dorsal, round, or sometimes elongate or irregular. The principal genera are Grammitis, Platycerium (staghorn fern), and Poly podium (polypody).

Family Elaphoglossaceae. Tropical epiphytes, mostly with simple leaves and scattered sporangia. Fertile leaves are often narrower and taller or shorter than the sterile leaves. The principal . genus is Elayhoglossum.