What is an isopoda? Information on structure, characteristics, reproduction and facts of isopoda. 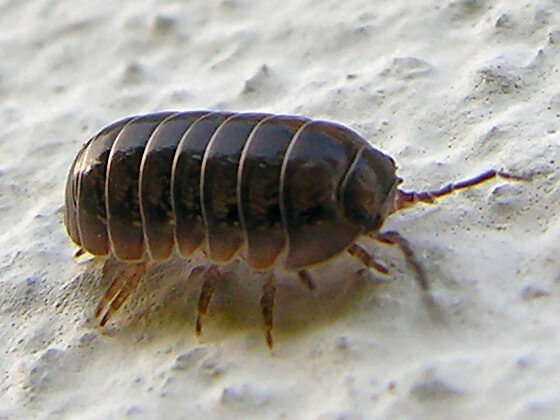 Isopoda; a group of typically flat-bodied crustaceans with seven pairs of walking legs. Most members of the order Isopoda are marine, but many live on land and in freshwater. The sow bugs and pill bugs—both isopods—are the most successful land crustaceans, but even they require humid surroundings because their body covering (cuticle) and “gills” must be kept moist for adequate function. Some isopods live in hot springs, and blind species are found in caves.

Isopods are mostiy browsers and grazers, feeding on a variety of vegetation, but many are scavengers. Some are external parasites of fishes and other crustaceans. The gribble (Limrioria) feeds on wood, causing damage to wharf pillings.

Isopods lack a shell (carapace), but the segmented back plates (tergites) project over and partially cover the walking legs. The head region bears two sessile (stalkless) compound eyes and six pairs of appendages. These appendages are two pairs of antennae, a pair of mandibles, two pairs of maxillae, and a pair of inaxillipeds—the last four pairs constitute the mouthparts, though the maxillipeds are actually appendages of the fused first thoracic segment. The thorax typically bears seven pairs of walking legs, all nearly alike, the feature from which the name “isopod” (“equal feet”) is derived. The abdomen bears six pairs of appendages: the first five are broad and leaflike (foliaceous) and are modified to function both as gills and as swimming appendages. The sixth pair, known as uropods, is variably shaped.

Fertilization is internal, and the first one or two pairs of the male’s abdominal appendages are modified for sperm transfer. The eggs and young develop in a pouch (marsupium) beneath the thorax of the female.

Many of the parastic isopods are protandrous hermaphrodites; that is, they are functional males before becoming functional females as adults. In one genus, Cyathura, this is reversed and pro-togynous hermaphrodism occurs, the individual functioning first as a female and later as a male.