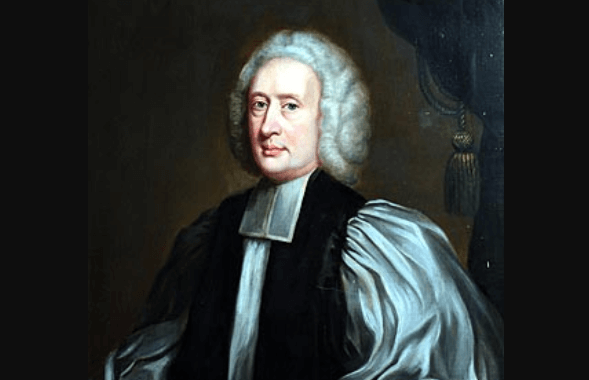 Joseph Butler; (1692-1752), English theologian and philosopher. He was born at Wantage, Berkshire, on May 18, 1692. He was reared a Presbyterian but became an Anglican and entered Oriel College, Oxford, in 1714. After receiving his degree he became preacher at the Rolls Chapel, where he delivered his famous Sermons on Human Nature (published 1726). Ten years later he published an even more famous book, The Analogy of Religion, Natural and Revealed, to the Constitution and Course of Nature. He became a friend of Queen Caroline, who at her death left directions that Butler should be promoted. In 1738 he was appointed bishop of Bristol and in 1750 bishop of Durham. He died at Bath on June 16, 1752.

Both his Sermons and Analogy of Religion had great influence in the later 18th and early 19th centuries. They were used as standard works in the education of Anglican and other clergy until late in the 19th century. Their chief aim was to refute the skeptical and deistic ethics and theology of the time. In ethics, Butler opposed the naturalism of Thomas Hobbes and also the legalistic morality of the deists and the “enthusiasm” of those who relied solely on private conscience.

Butler recognized the historical development of ethical principles, for which he assumed a completely rational explanation, as parallel to the development of science. Man does not possess all knowledge or even the capacity for all knowledge, but he does possess the ability to judge and distinguish right from wrong. As in science, this judgment is often —perhaps always — dependent on the choice not only of the right instead of the wrong, but of the better, not the worse. In a word, man must follow “probability,” which Butler described as “the very guide of life.” Here Butler relied upon the principle of preferring the more likely and more reasonable view in any crisis demanding choice. His position, however, was not equivalent to the “probabilism” of the Dominicans and Jesuits of the preceding two centuries.

The same test was applied to the whole of religion, in both its natural and revealed stages, against the reduction of religious truth to mere rationality. Aided by reason, we can recognize the better, more reasonable, more probable conception of God, His purpose and will, the nature of man, and his future destiny. Butler defended in the same way the prophecies of the Old and New Testaments, as interpreted in the 18th century, and also the miracles and the whole system designed by patristic and traditional theology. Along with this he included many sage and tersely stated observations on the nature and practice of religion. Like most apologists, he undertook to prove too much. But his effort involved warnings against misinterpretation and false inductions, warnings that deserve perennial recollection.