Frances Burney; (1752-1840), English author, who was the best-known woman novelist of the late 18th century. She was also known by her married name, Mme. d’Arblay. Her novels departed from the coarse-grained language and vulgar situations used by such earlier writers as Fielding and Smollett and helped set a pattern for the more decorous fiction of the Victorian period. Her diaries and letters, published after her death, remain an important source of information about many famous contemporaries. 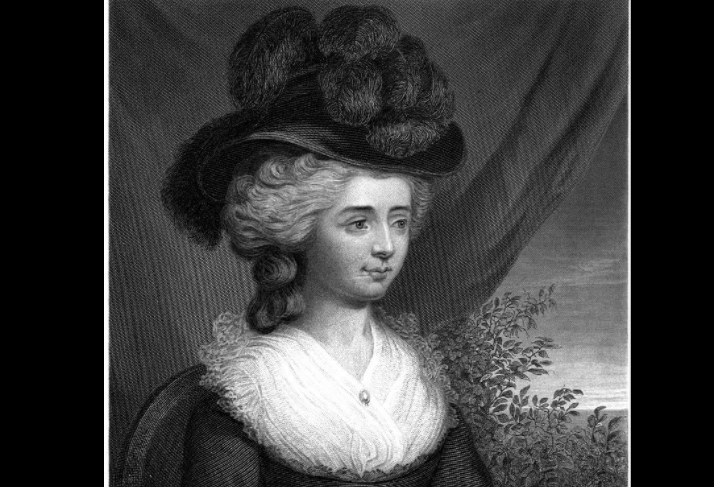 Frances Burney was born at King’s Lynn, Norfolk, on June 13, 1752, the daughter of Charles Burney, a noted organist and music historian. She studied at home, and when her father moved to London, she was introduced to his circle of friends, including Dr. Johnson, Edmund Burke, and Mrs. Thrale. Fanny Burney’s novel Evelina, or A Young Lady’s Entrance Into the World, published anonymously in 1778, won her an even wider circle of notable admirers when its authorship was revealed. Her fame grew with the appearance of Cecilia, or Memoirs of an Heiress (5 vols., 1782).

In 1786 the Queen appointed Fanny Burney to the position of second keeper of the robes. Though considered a great honor, this office entailed disagreeable associations and long hours of tedious attendance on the Queen, and after five years Fanny Burney became ill and was allowed to retire from court with a small pension.

Her health gradually improved, she met various French émigrés fleeing the French Revolution, and in 1793, at the age of 42, she married one of them, Alexandre Gabriel d’Arblay, a former adjutant general to Lafayette. She had a son and, to help support the family, resumed writing. From 1802 to 1812 she lived with her husband in France, where he secured a government post under Napoleon. In 1812 the couple returned to England, where she continued to write after her husband’s death in 1818. She died in London on Jan. 6, 1840.

As an 18th century novelist, Fanny Burney knew the predilection of her reading public for sentiment, moralizing, and instruction in manners. Familiar with etiquette books for ladies, she especially appealed to the growing number of women readers by providing examples of decorous behavior in society. Her novels Evelina and Cecilia also skillfully satirize coarseness, delineate character (the heroines reflect the development of her own personality), and have somewhat natural-sounding dialogue. However, in her two later novels, Camilla, or A Picture of Youth (5 vols., 1796) and The Wanderer, or Female Difficulties (5 vols., 1814), her artistry was subordinated to an overriding didacticism, which resulted in priggish characters, excessive moralizing, and melodrama.

Frances Burney was also a diarist and a great hoarder of letters, and her fame may eventually rest on her vivid and often humorous memoirs. In 1832 she published the Memoirs of Dr. Burney (3 vols.). Two other important works, appearing posthumously, were The Diary and Letters of Madame d’Arblay (7 vols., 1842-1846) and The Early Diary of Frances Burney (2 vols., 1889). A great number of her letters, as well as additional diaries, still remain in manuscript.